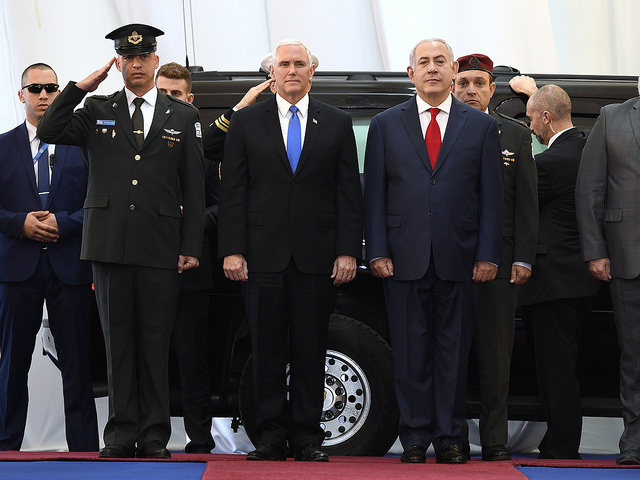 Many have expressed scepticism of Benjamin Netanyahu’s claims regarding Iran’s alleged covert pursuit of nuclear weapons, but the Israeli prime minister needs only convince Donald Trump

ISRAELI PRIME MINISTER Benjamin Netanyahu this week presented what he described as “new and conclusive evidence about the nuclear program Iran is hiding from the international community since years ago.”

It is Netanyahu’s contention that the Iranian government has lied to the international community about never having a nuclear weapons program, and that the Joint Comprehensive Plan of Action – the agreement reached in 2015 between the Islamic Republic of Iran, the European Union and the so-called P5+1 (the permanent members of the UN Security Council, plus Germany) – has failed in its goal to halt the development of Iranian nuclear weapons.

In a television press conference, large portions of which were in English, Netanyahu indicated 55,000 pages of documents and pictures, supposedly obtained by Israeli intelligence, which allegedly demonstrate that Iran “lied about their commitment with the nuclear agreement signed in 2015.”

Although few details were shared with the press, Netanyahu said that the information gathered had been shared with the US, the UK, France and the International Atomic Energy Agency (IAEA), the UN’s nuclear watchdog, less than two weeks before 12 May, when President Donald Trump will announce whether the US will reverse the 2015 deal partially overseen by the Obama administration.

However, contrary to Netanyahu’s description of the obtained intelligence as “new and conclusive”, there was little new – Netanyahu has repeatedly accused Iran of developing nuclear weapons for years – and, according to international experts, proved nothing conclusively.

Following the address, the IAEA responded to Netanyahu’s accusations on 1 May, saying that it had “no credible” evidence to suggest Iran had been working on developing a nuclear “explosive device” since 2009. Following its last report on the matter in December 2015, the IAEA has described the issue as “closed.”

Former Israeli prime minister Ehud Barak also told Israel’s Army Radio: “Israel’s amazing intelligence has not provided a smoking gun. All in all it is a big help for Trump ahead of the May 12 decision.”

In his assessment, Barak articulated a widely-held belief that Netanyahu’s latest intervention was less to do with convincing the international community of Iran’s insincerity on nuclear weapons, and more to do with providing assistance to President Trump, who has made no secret of his disdain for the 2015 deal and may abandon it, despite the opposition of many Western nations.

US secretary of state Mike Pompeo commented that the information presented by Netanyahu showed that the Iranian Government had lied to the Iranian people about a nuclear weapons program known as ‘Project Amad’, but declined to say definitively whether the documents shared with the US provided any evidence that the 2015 deal had been violated.

Predictably, Tehran has dismissed Netanyahu as “the boy who cried wolf,” and called his presentation propaganda. Whether or not that is the case however, there is an irony in the Israeli Government sharing anything with the IAEA, given the country’s own secretive and controversial nuclear weapons program.

Much like Iran, Israel has never admittedly publicly to seeking nuclear weapons or maintaining a nuclear weapons program, but it is widely believed by international observers that the state became the sixth in the world to develop such an offensive nuclear capability, and may today hold an arsenal of up to 400 warheads.

The first concrete evidence of an Israeli nuclear program was revealed in 1960, when Time magazine reported that a non-Communist, non-NATO country had made an “atomic development”. Days later, the Daily Express named the country in question as Israel, which was later confirmed by the US Atomic Energy Commission chairman John McCone. With McCone’s aid, the New York Times published a report the following day revealing that France was assisting Israel in its nuclear program.

Confirmation that Israel had reached beyond the development stage and achieved a nuclear capability came in 1969, with a subsequent report in 1970 alleging that Israel had assembled 13 bombs during the Yom Kippur War as a last defence against total defeat, and had maintained the useability after the culmination of the conflict.

“The boys in Tehran know Israel has 200, all targeted on Tehran, and we have thousands.” Former US secretary of state Colin Powell

In 1986, the Sunday Times newspaper published more extensive details of the Israeli nuclear program, having obtained information from former Israeli nuclear technician Mordechai Vanunu, who was subsequently kidnapped by the Mossad in Rome and returned to Israel, where he was sentenced to 18 years’ imprisonment for treason and espionage.

In 2010, the hacking group DCLeaks obtained emails from former US secretary of state Colin Powell, which stated that Israel had a stockpile of 200 nuclear weapons. Powell wrote: “Anyway, Iranians can’t use one [a nuclear weapon] if they finally make one. The boys in Tehran know Israel has 200, all targeted on Tehran, and we have thousands.”

Nevertheless, in 2015, a UEAE resolution calling for nuclear inspections in Israel was defeated by 13 votes, including Israel’s principal allies of the US, the UK, France and Germany. The proposal called for the opening of all Israeli nuclear facilities to investigation, and for Israel to sign the Nuclear Non-Proliferation Treaty. Following the vote, several governments that had voted in favour of the resolution accused Israel of violating international law.

The apparent double-standards of pursuing nuclear non-proliferation elsewhere in the world but ignoring a covert and illegal nuclear weapons program in Israel has rarely bothered the US before, and the administration of Donald Trump is unlikely to highlight the hypocrisy of that position now. With both the Israeli and American governments keen for the Iran deal to end in its current form, there is too much to gain by looking the other way.