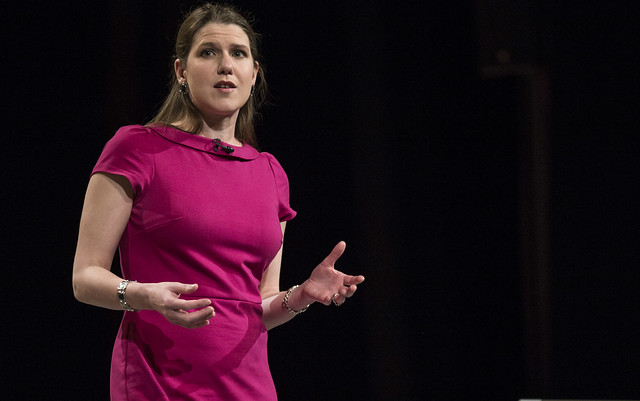 Recent comments by the Lib Dem leadership hopeful demonstrate that, while the political environment may have altered in their favour, the party remains the same

IT has been a tumultuous two decades for the Liberal Democrats.

Here is a party that devoted far less energy to opposing the Iraq War than they did to creating the impression that they had; the favoured choice in 2010 amongst those who’d never engaged in protest voting before – and based on what followed, likely never would again; stalwart opponents of tuition fees… until they weren’t. Opponents and coalition partners to Conservatives, advocates of a second referendum on Brexit but absolutely not on Scottish independence, who were until recently a collective of nominal liberals led by a man who struggled to voice even lip-service support for the key tenets of social liberalism. In conclusion, LibDemia is a land of contrasts.

From its experiences throughout the 21st century thus far, it would be easy to conclude that this emphatically British chimera – which has limped on by whatever means necessary in an electoral system all but designed to shut out would-be rivals to the two dominant parties on a UK level – is a changeable beast. Certain of its high-profile members have displayed astonishingly flexibility (e.g. Vince Cable, erstwhile contributor to The Red Paper on Scotland, transitioned to handmaiden of austerity without apparent discomfort, before ending up as interim party leader on the grounds that there basically wasn’t anyone left) but reports of ideological sea-changes within the Lib Dems have always been much exaggerated.

A party of moderates and centrists predictably struggled when both Labour and the Tories decided to occupy the centre-ground as well, then furiously set about trying to redefine what the centre was. In consequence, weak attempts were periodically made to portray woolly liberalism as a rare species of radicalism, and when that invariably failed, wandering convictions were excused by brutal pragmatism. In power, this made them pariahs; beyond that, it made them pathetic.

And yet, to the surprise of many – political journalists chief among them – the Liberal Democrats appear to be having something of a moment. Call it a reprieve or a Renaissance, but polling – particularly since last month’s European parliamentary elections, in which the Lib Dems were amongst the beneficiaries of the enduring polarisation over Brexit – has begun to indicate that not only are the Lib Dems enjoying something of a resurgence, but are now tentatively approaching the kind of unlikely resurrection that would give hope even to Scottish Labour.

In light of this, the UK – albeit grudgingly, especially in some newsrooms – is learning to pay attention to the Lib Dems again, a task that a year ago many would have shunned in favour of watching paint dry. This unsavoury task has become all the more pressing with a General Election theoretically in the offing, and a Lib Dem leadership campaign in its early stages.

Once again, with the party a potential kingmaker, Jo Swinson and Ed Davey – both of whom are in the running to succeed Cable – have indicated they wouldn’t wish to join a coalition with Labour under Jeremy Corbyn or the Conservatives under Boris Johnson, though are not opposed to the idea of coalition “in general”. Once again, the idea of British politics turning upon Lib Dem fancy has become a possibility – as does, for those whose memories extend back 10 years, moving to France, or possibly Bolivia.

READ MORE: Jo Swinson MP: Labour and the Conservatives are ‘like the banks during the crash’

In light of all this – their current highs and past humiliations, their record (self-evident) and their principles (less so) – the question of the hour isn’t whether the Liberal Democrats have changed, because they haven’t.

This is not (necessarily) an insult; many Lib Dems will tell you it is their consistency on Brexit and their unyielding demands for a People’s Vote that have finally paid off for them. And there may be some truth in that. The party may not have changed, but the political environment has. But while the pundits and politicians race to interpret how this magical combination of circumstances became favourable to the little yellow bird, it is worth reminding ourselves that it’s not just the Lib Dems’ position on Brexit that has remained the same.

It is the accepted wisdom that coalition with the Conservatives, the government that no one voted for and briefly provided the Lib Dems with their greatest triumph, all but killed the party in British politics, repudiating those who argued that any road to power was preferable to principled opposition. Many seemed to hold the party more accountable for the austerity that followed the 2008 financial crisis than its key architects, and why not? The Tories may have used economic calamity as an excuse to inflict upon the UK the kind of policies which had always haunted their dreams, but it at least made brutal political sense – the use of political power to pursue ideological ends. For the Lib Dems, the pursuit of power – with little to no ideology attached to it – became their undoing.

“If you’re wondering how Cameron ever reached a position of power where such a staggering bungle was possible… Ask the Lib Dems.”

This chapter in the party’s history, prematurely judged as penultimate, was revisited yesterday by Jo Swinson, the cautious favourite for the leadership, when she was asked directly by Andrew Marr whether she personally believed austerity was a mistake or not.

In light of the financial crisis, Swinson responded, “we did need to make cuts.” Blissfully ignoring the fact that every nation which attempted to cut its way out of recession met with failure and mass human suffering, Swinson did acknowledge her regret over some specific human suffering in the case of the Bedroom Tax, on the curious grounds that “we said that we weren’t going to do it, so we shouldn’t have done it.” English students paying tuition fees might wonder what the world would be like if this kind of hindsight was applied a little more widely.

Swinson did take a brief diversion into truth by noting that the regime of cuts the coalition government pursued was virtually identical to that set out under Labour by Alasdair Darling. Though it was probably not Swinson’s intention, it is useful to be reminded that, at a time when the UK teetered on the brink of depression, a neoliberal economic consensus endured across British politics which seemingly no disaster could shake. “There is no alternative,” was the preferred phrase of Margaret Thatcher, who Swinson infamously argued should be memorialised with a statue in Parliament Square.

It is, whether they admit it or not, a nostalgia for this era of British politics that has helped drive the Lib Dems’ revival; as old certainties crumble, everything old is new again. Yet it is ironic that many of those who place their faith in this Frankenstein party should be the most fervent opponents of Brexit – the same people who will tell you, with justifiable bitterness, that the EU referendum itself only came about as a misjudged gambit by David Cameron.

If you’re wondering how Cameron ever reached a position of power where such a staggering bungle was possible… Ask the Lib Dems.