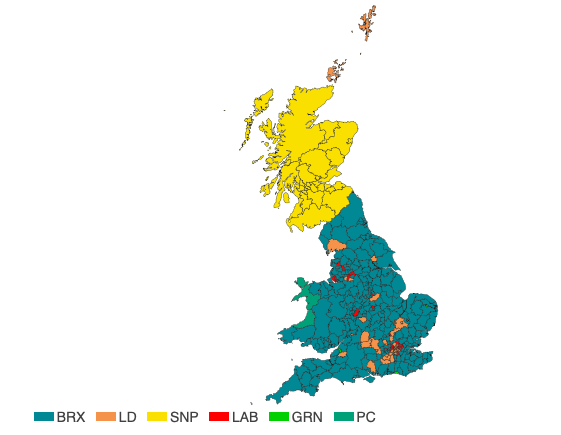 CommonSpace editor Ben Wray analyses the European election results, which have been a predictable disaster for Labour and the Tories

ONE look at Britain’s political map after the EU election results shows how constitutional politics has ripped it up, in a way that won’t easily – if ever – be put back to the way it was before.

In 2004, before the constitution became a major driver in Scottish and UK politics, the Tories topped the polls in the European Parliament elections, winning 33.5 per cent of the vote. Labour were second on 26.3 per cent. Combined, that’s 59.9 per cent of the vote, just short of two-thirds of votes cast.

The UK’s political map after yesterday’s elections is dominated by the yellow in Scotland of the SNP and the light blue in England and Wales of the Brexit Party – but even that doesn’t tell the full story. Scottish Labour were down to fifth place with just 9.3 per cent, a 15 per cent fall in their 2014 vote. The Tories UK-wide were the fifth party on just 8.7 per cent, some 3 per centage points behind the Green Party. By any measure, these are profound shifts in Scotland and Britain’s voting behaviour.

Labour centrists are now conveniently lecturing Corbyn on how to do electorally succesful politics again, forgetting that they were in charge of the party in Scotland when it followed up its disastrous Better Together campaign in the 2014 referendum with a General Election the following year which saw the party all but wiped out in what was once the party’s heartlands. The truth is that their political strategy always conveniently aligns with their view of the world, which is that the status quo is basically fine and needs to be defended.

Corbynists should take more seriously the analysis of those pro-independence left, many of whom have been warning for years now of the dangers for the Labour Party of not learning the lesson of 2014, which is that constitutional politics doesn’t end with the referendum result and getting stuck in the middle can be very dangerous terrain.

As we have argued regularly on CommonSpace, the politics of not taking the constitution seriously is deeply rooted in Labourist ideology, which creates an artificial divide between class and constitution, whereas in fact the two are intimately connected via the state – the dynamics of state power is never class neutral and is always defined constitutionally. To put it in practical terms, the outcome of constitutional divides like Scottish independence and Brexit has a major bearing on most people’s lives, and can’t be written off as second grade issues to the ‘bread and butter’ of the NHS, jobs, wages etc, nor can constitutional concerns be airily dismissed as ‘nationalism’.

Unfortunately, Richard Leonard repeated that trope following the party’s disastrous result in Scotland. Instead of accepting they need a re-think, in a display of pointless moralism he said Labour were the only party trying to unite the country and had been caught between “the divisions caused by the competing nationalisms of the UK and Scottish governments”.

In place of a clearly articulated argument post-EU referendum, Labour have been buffeted by the winds of the Brexit crisis, and went from a bit of a fudge to a huge baking tray full of it, unable to say if they were for Leave or Remain.

This leaves the party in a very dangerous position now, as the temptation to chase their voters in one direction or the other grows ever greater. They could stick with the middle-ground position in the hope that, like in the 2017 General Election, voters change focus towards other issues, but with the risk that if Brexit is unresolved or becomes a permanent battle-ground politics just leaves them behind, with their voter base splitting between the Brexit Party and the Lib Dems. Twist with going full Remain and risk giving up large chunks of England and Wales to the Brexit Party, while trying to build a new voter coalition which includes ex-Tory Remainers who traditionally do not align their economic/class interests with Labour and are not instinctively attracted to Corbyn.

Of course the Tories have the same problem, and it’s worth baring in mind that they lost out more in this election than Labour did. But with a leadership election fast approaching, and the membership resolutely on the Brexit-wing of the party, there’s a good chance that they will have picked their side within a matter of weeks, and it will be for delivering Brexit by 31 October come hell or high water. Of course No Deal Brexit would present it’s own major difficulties for the Tories, but they will at least have an obvious pitch to those voters all across England and Wales who have moved to backing the Brexit Party: we delivered, Theresa is gone, come back to us.

In terms of Scottish politics specifically, Nicola Sturgeon’s unambiguous pro-Remain/pro-Indy message clearly won the day, with the party increasing it’s vote share by 8.9 per cent on 2014. Ian Blackford is right to argue that the result strengthens the party’s mandate for a second referendum. Scotland in Union have predictably said such a statement is “shameless”, but before the election they sent out a mail-shot across Scotland arguing that a vote against the SNP was a vote against indyref2 – they can’t have it both ways.

The Brexit Party came second in Scotland, but they only secured the same number of seats as Ukip did in Scotland in 2014, and their vote share on Ukip’s 2014 result was only up 4.3 per cent. While it’d be wrong to be complacent about the Brexit Party in Scotland, it’s clear that the picture is vastly different between Scotland and England/Wales, where  Farage’s party won in almost every region.

The Remain majority in Scotland only re-affirms what we already know: that anti-establishment sentiment north of the border is aimed at London, not Brussels, and sees independence, not Brexit, as its goal.

CommonSpace is entirely reliant on small, regular donations from you: our readers. Become a donor today to support our work.