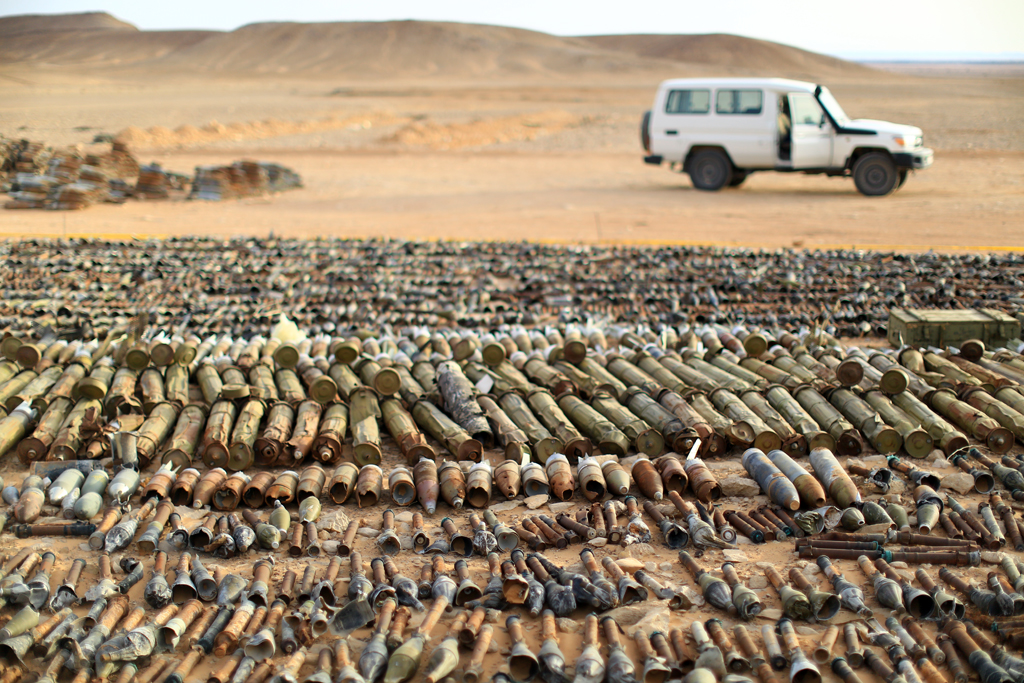 GENERAL Khalifa Haftar’s forces are on the outskirts of the Libyan capital of Tripoli, and thousands of people, including US officials, are fleeing as the strong man’s militia attack airports and other infrastructure.

This dramatic and violent twist in post-2011 Libya is just the latest in a country descended into chaos after Nato’s bombing, which led to the demise of Muammar al-Gaddafi’s regime.

As voices in the media and politics again complain that a public mood against so called ‘western intervention’ is restraining UK and US influence, it is necessary to examine the mess of present day Libya.

A land in chaos

At the height of the refugee crisis, around half a million migrants passed into Europe through Libya, thousands of whom drowned in the Mediterranean.

It was in this time that slavery and human trafficking also became widespread, and videos emerged in 2017 of sub-Saharan African slaves being sold at auction for $400.

Sub-Saharan Africans were mistreated in Libya in the aftermath of the collapse of the Gaddafi regime and the bombing campaign, with many being hanged in shocking scenes. Many of Gaddafi’s fighters were mercenaries from countries to the south, and accusations of complicity in the regime, often false, spread like wildfire across the country.

In a lawless state with a broken economy, the large numbers of migrants moving north to Tripoli created a considerable opportunity for gangs operating beyond any organised government authority to exploit a population lacking social status.

Hundreds of thousands of migrants filled Libyan detention camps and were often sold as labourers by armed criminal groups.

This shocking trade only serves to outline a general picture of chaos.

Rival militia factions, having toppled Gaddafi late in 2011, were already fighting each other by January 2012. The subsequent years have seen the failure to form any centralised government, the emergence of Al-Qaeda and Islamic State type groups and a significant increase in lawlessness and violence.

It is against this background that General Haftar arrived.

Haftar’s background is filled with vagaries. He was part of the movement that brought Gadaffi to power in 1969.

After falling out with Gaddafi over a military failure in 1987, he was cut loose from the regime and spent many years in exile in the United States, where he is understood to have become close to the CIA, living in Virginia near the intelligence group’s headquarters. He organised consistent attempts from the US to undermine or kill his former leader.

Haftar returned to Libya in 2011. From September 2016 Haftar launched an expansion of his influence from Tobruk far in the east of the country, one of the national power centres besides the ‘official’ government in Tripolli.

The Tobruk alliance intially included the United Arab Emirates, France, Egypt and Russia and he is thought to be constructing an alliance with Saudi Arabia, in order to cement the support of adherents of the Salafi Madkhali school of Islamic teaching in the country.

Haftar has been quite clear that a new stability, without the factional chaos, with a unified army and police, is his priority above democracy and pluralism.

Having seized much of the east and south of the country, he still faces a serious challenge in taking Libya’s capital and largest city in what he is describing as a “victorious march”. But he has gained momentum from his capacity to defeat Daesh-type groups.

The price of destabilisation

If Haftar is successful, the hopes of many of the revolutionary generation will be quashed, at least for a time. Haftar is expected to want to integrate his LNA as the new military-state apparatus in the country, such that any new governmental authority is ultimately subject to this regime. A separation of powers up to a certain extent is likely due to Haftar’s own forces being made up of multiple militias, but the underpinning of the new state by a military force with him in charge would reflect the state form across the region.

If he is defeated at the gates of Tripoli, and he is understood to have faced military setbacks at different times, then Libya will remain a divided tissue of local and regional power centres, until some other force makes a play to establish national authority.

This chaotic picture is the organic outcome of Nato’s intervention in 2011. A bombing campaign, using militias based on local warlords and power-bases rooted in tribal divisions, was always going to leave post-intervention Libya as a patchwork of jealous principalities fighting over the spoils.

The absence of ground troops from Nato countries was the consequence of the unpopularity and expense of the Iraq War, where a form of neo-colonial rule based on dividing the country up on sectarian lines and rewarding the new rulers with financial corruption could not solve that country’s internal fractures and ultimately collapsed.

A cottage theory emerged from the Libyan bombing campaign that the problem with intervention during the War on Terror was not the intervention itself, but the deployment of ground forces and attempts at ‘nation building’. Another is that ‘local allies’ were not sufficiently involved.

But really, just as many problems have been promoted by the interests of regional rivals and interests, and an overriding problem with western intervention is the removal of the only force which can generate lasting peace and justice – domestic democratic sovereignty, itself removed by intervention.

This reality has a new urgency, due to the re-emergence of revolutionary trends in parts of the region – most notably the important states of Algeria and Sudan.

The destruction of the Arab Spring, generated jointly by the intervention of foreign powers and by domestic repression, has not disposed of the underlying contradictions of the states in the Middle East, where economic and social problems continue to plague large, youthful populations.

They will return again and again to the streets. It is vital they cease to be frustrated by western interventions, intended not to promote democracy and justice but western influence, if there is to be a road forward for the region.