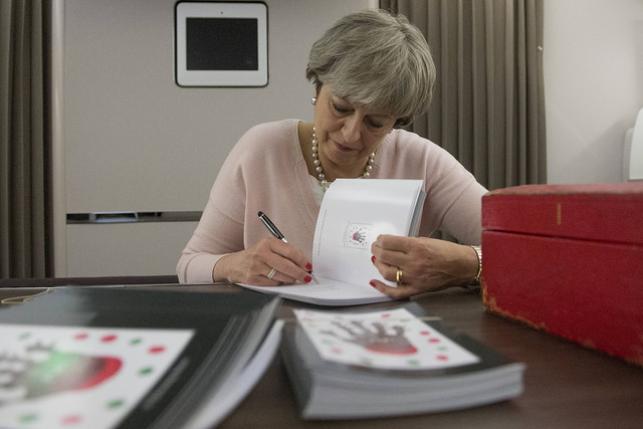 The prime minister’s credibility is shot, but did Corbyn blinking first give her the wriggle room to back down?

THERESA MAY has done what she said she would never do. She has raised the prospect of a delay to Brexit, in a gigantic u-turn.

She didn’t just say once that she would never countenance a delay in Brexit, and that Britain will definitely leave on 29 March. She said it 70 times. Seventy.

There are lots of questions to be asked now, but one surely has to be about the Prime Minister’s character: why on earth should anyone ever believe anything she has to say on Brexit again?

This is a Prime Minister, let’s not forget, who campaigned for Remain before then leading a Leave government. A Prime Minister that suffered the biggest loss in UK parliamentary history, and then shrugged it off, pretending that she would seek changes to her deal with the EU when she knows that no changes are forthcoming.

READ MORE: Analysis: The take away from the first days of Brexit 2019? No Deal is a charade that won’t happen

May, a proven liar, unable to command a majority of MPs on her most important legislation, remains in Number 10 only because Tory MPs would rather prop her up than face the public.

The question of a General Election disappeared off the political agenda immediately after Labour’s no confidence vote failed, but it will surely have to raise its head again sooner rather than later. The deadlock of a parliament which can’t agree to support anything – not a deal, not no deal, not a second referendum – can’t continue forever.

The most likely outcome now from the three votes on 12, 13 and 14 March – on the meaningful vote, No Deal and an extension respectively – is that the House of Commons will back an extension to Article 50, and that Britain won’t be leaving the EU on 29 March. That alone means that May has failed in her primary responsibility following the 2017 General Election – when she failed to deliver a majority – which was to deliver Brexit. That alone should see her step down.

The irony is that Jeremy Corbyn blinking first by backing a timetable for a People’s Vote on Monday [25 February] has probably given the Prime Minister more political wriggle room. With Labour seemingly giving up on the Leave vote constituency, committed Leavers have no other political options than to continue to back the Tories and their hapless Prime Minister.

This gives the Tories political breathing room to sort out their problems, while the threat of a People’s Vote may still be a paper tiger. Despite Corbyn’s support for it, it is probably still 70-80 MPs short of a majority in parliament, with a significant sum of Labour MPs – potentially including some on the shadow cabinet – who will refuse to back a People’s Vote. Just as Corbyn could have put his foot on the General Election accelerator again, he has caved to a position which almost certainly adds to his electoral challenges while not breaking the Brexit deadlock.

As for the Tory backbenchers, it’s not clear why they should feel particularly threatened by what May has done today – while an extension could allow anti-Brexit momentum to build, a short one is unlikely to be a major political gamechanger. If May can’t secure any improvements to her deal from Brussels, they know that an extension will follow, meaning May would be going back to Barnier and Jean Claude-Juncker seeking more concessions again. They will now have even less reason to concede anything before the meaningful vote on 12 March.

This debacle has finally revealed where the power lies in the Cabinet: with a set of Tory MPs who in all respects would much prefer Britain stay in the EU. If that is not achievable they want as soft a Brexit as possible when it comes to its impact on British capital. That’s the Chancellor, along with the Business Secretary, the DWP Secretary and the Justice Secretary, all of whom have been signalling to big business for months that ‘we won’t let No Deal happen on our watch’.

The notion that Brexit was really being driven by the ERG and the hardline Brexiteers has surely been proved irrefutably wrong. If Brexit is to ever happen, it will be managed by the Tory pragmatists to incur the least possible damage on Britain’s financial elites. If Jacob Rees-Mogg and co want to unseat the real power in the Tory party, they’ll have to risk a General Election to do it.