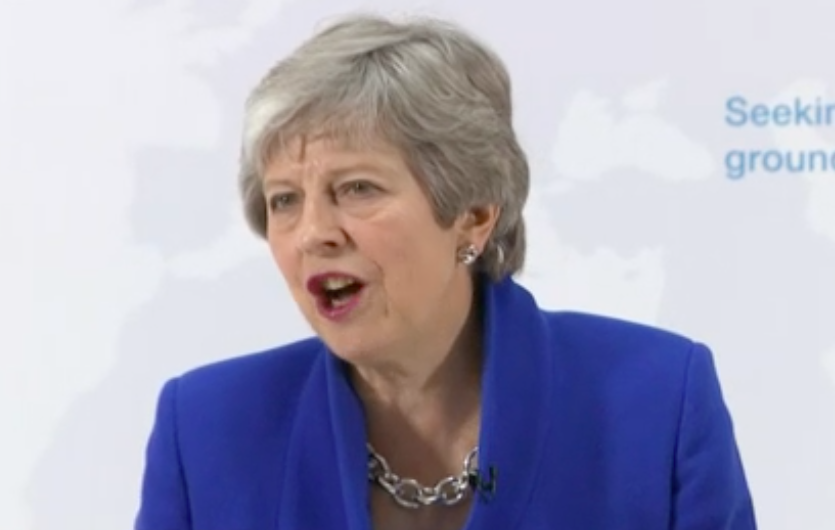 Prime Minister Theresa May has offered up one last throw of the dice with her new Brexit deal to try to secure a majority in the House of Commons. Ben Wray takes a look at whether it has any chance of success.

THERESA MAY has played her final hand.

In a speech at the PwC offices (somehow a corporate accountancy firm seems an apt place for the Prime Minister to make her final stand) May laid out ten new commitments to try to get her fourth and final Withdrawal Agreement vote through the House of Commons on 3 June.

There was a little bit for everyone in her ten commandments: for the Remainers a parliamentary vote on holding a People’s Vote. For the Unionists a commitment that if the Northern Ireland backstop ever came into force the UK would stay fully aligned with NI. For backbench Labour MPs, workers’ rights and environmental protection at least no worse than the EU’s. For the Labour front-bench, a Customs compromise which would give MPs a free vote on whether to support the government’s Customs plan or Labour’s.

Okay so the last one probably isn’t much of a sweetie for Jeremy Corbyn and John McDonnell, and certainly won’t lead to an endorsement of the Withdrawal Agreement by the party, but that ship had sailed already with the collapse of the cross-party talks. The prime minister’s aim is to steal Labour MPs away from voting with the party whip.

But of course she also has to keep her own MPs on board at the same time, with one Tory backbencher, Simon Clarke, first off the bat to declare that they backed May’s Withdrawal Agreement in the third vote, but will not do so on the fourth one – too many sweeties for Labour.

I supported the PM at MV3, to try to get us out on 29 March. But this speech from the PM means there is no way I will support the Withdrawal Agreement Bill.

It’s difficult to imagine the Prime Minister will not see a significant chunk of Tory backbenchers slip through her fingers on 3 June, after all what’s the point in Tories backing what they will see as a Labour-shaped Brexit? The irony of May’s speech was that the one part of Tory Brexit she tried to cling on to in her speech was the possibility of an independent trade policy, but she has conceded on the substance of why the Tories which wanted an independent trade policy in the first place, which is a race to the bottom on conditions and standards to under-cut the EU. The concessions to Labour rules that possibility out, which leaves the question: if this is really a Brexit where everyone can have their cake and eat it, is it not also a bit pointless?

The prime minister attempted to give her backbenchers a smidgeon of their Brexiteer, Empire 2.0 dream to hold on to, which is that the Deal was not ultimately “the final say” but merely “a stepping stone” into the bold new world of post-EU Britain. She argued that to not take this chance now would see it “slipping away from us” and that the fourth vote really was “one last chance” to get it over the line.

While MPs are aware that it genuinely is “one last chance” for the prime minister, they also know the Brexit saga will survive her defeat, with a new PM stepping into May’s shoes following a quick-fire Tory leadership contest, potentially lasting just weeks. That new leader will carry a fresh mandate from the members (if not from the country), and that will surely be to face Brussels down and see No Deal through if they won’t return to the negotiating table with a better offer.

READ MORE: Analysis: Tory members have the future of Britain in their hands – unless democracy intervenes

With that context in mind, some Tory MPs who are dead set against No Deal may back May’s new deal, but with her authority draining away and a posse of leadership candidates seeking to win the hearts of the party, it is most likely that the overall balance of forces among Tory MPs will see the deal voted down again and the PM sent packing.

For Remainders, the offer of what is essentially another free vote on whether to have a second referendum or not is unlikely to be too tempting. SNP leader Nicola Sturgeon was quick off the mark to turn it down.

It feels like too little too late for the PM to build a new coalition across the House. If she had made that move following her humbling in the 2017 General Election, and recognised the basic mathematics of being a minority government that needs a majority to get Brexit through, it may not have ended in what now looks like being disastrous failure.

CommonSpace is funded entirely by small, regular donations from our readers. To keep CommonSpace going become a donor today.