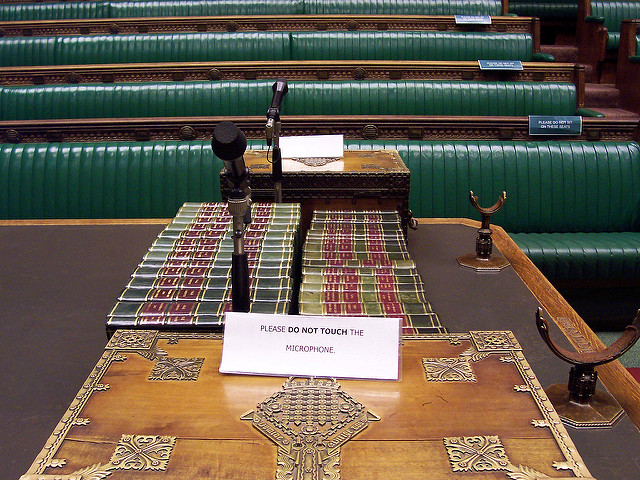 CommonSpace editor Ben Wray says that when it comes to democratic legitimacy, an independence referendum is streets ahead of the Prime Minister’s Withdrawal Agreement

THE Prime Minister’s new plan is to keep ramming Plan A down the throats of MPs until they eat it.

Not content with losing twice, it’s now reported that May is setting up not one, but two new meaningful votes on her Brexit deal.

This may well be against parliamentary rules, as the House of Commons – quite rightly – is not supposed to vote on the same thing twice, never mind three times.

One might ask what does Theresa May think she can achieve from more votes that she didn’t achieve from previous ones? The answer will be obvious to any bully: the weight of psychological pressure – both due to forcing them to vote again and again if they don’t give the right answer and due to the clock ticking towards 29 March – can be an immense one.

In fact May is not simply trying to bully one side of the house through blackmail tactics, but both. While her Brexiteers backbenchers have a long Article 50 extension hanging over their heads, soft Leave voters on the other side of the House have the threat of No Deal hanging over theirs (if Brussels is not quick to agree to one).

This strategy of psychological pressure is only possible because the Prime Minister has ripped up all democratic convention and simply ignored the fact she has no mandate left to govern, after being roundly defeated twice on her main legislation. This is a clear abuse of power, one which a House of Commons which did not contain Tory and DUP MPs terrified of Corbyn as Prime Minister would not stand for.

There is an obvious irony to May’s line of argumentation in justifying this position, which is essentially that to achieve the democratic will of the people she must suspend democracy henceforth. The Leave vote was the democracy moment, everything thereafter – including her dodgy interpretation of that vote – is democracy suspended. That’s despite calling a snap General Election in 2017 supposedly on the basis of securing a negotiating mandate, which she then failed to secure.

It should now be clear to anyone who has been paying attention to British politics over the past six or seven years that democracy is a fluid process, marked by key moments but not moments which become set in stone forever more. The people must reassert their will over and over again, and in a parliamentary democracy that’s done through an election.

So when Nicola Sturgeon argued in 2014 before the independence referendum that it would settle the matter for a generation, she was wrong. It’s not for her or any other politician to decide if that issue is settled for a generation, 10 years, five years or whatever: it’s for the people to decide.

When the Scottish people decided to vote in the 2016 Scottish elections for parties which supported an independence referendum if Scotland was forced out of the EU against its will, that was the people deciding that the question of independence was in fact not settled for a generation, and was back on the agenda. All the huffing and puffing from unionists – “but Nicola said” – doesn’t change that simple fact of democratic sovereignty.

We shouldn’t let May ever lecture the independence movement on not taking No for an answer again. But to be consistent, we should argue that if she wants to secure a mandate to ask MP’s to vote again, she has to do what the SNP and the Scottish Greens did, and ask the people of Scotland if they want such a mandate again in an election. And that goes for the People’s Vote as well: pose the Brexit question again, but only do so after securing a mandate in an election.

The only way out of the Brexit maze is through clear-sighted democratic principle, in the face of May’s cynical, anti-democratic bullying.