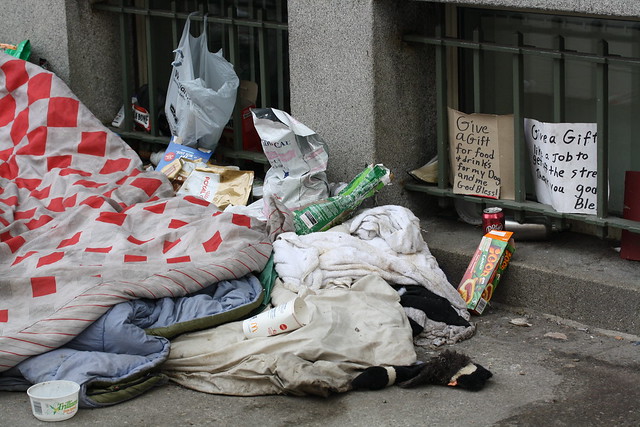 GOVERNMENT statistics released this morning [26 June] show a 3 per cent rise in homelessness applications to local councils in Scotland over the last year, the second year running that the figures have increased.

This comes as councils continue to dramatically overhaul the existing homelessness system towards a rapid rehousing policy and eventually a Housing First model.

Authorities are undergoing a seismic change by moving to this model, which is based on the principle of an unconditional right to permanent housing accommodation, with support services then provided around the provision of housing security. This has been hailed as a success in Finland and in the small scale trials across Scotland in the past few years. Given the current state of homelessness, it surely can’t come quickly enough.

It’s too soon to assess the impact of the policy change currently being undertaken, but the new figures – with over 36,000 homelessness applications from 1 April 2018 to 31 March 2019, and of those almost 30,000 were assessed as homeless or threatened with homelessness – indicate the scale of the problem the government will have to solve.

Gordon MacRae, head of communications and policy at Shelter Scotland, has said: “Last year, when homeless applications rose for the first time in a decade, we warned that alarm bells should be ringing in Holyrood and asked for urgent action from all areas of local and national government to combat homelessness and its causes. On today’s evidence, it is clear no progress has been made and homelessness in Scotland is still getting worse not better.”

The figures are the second rise in homelessness applications per year in a row, after a decline between 2009 and 2017. That regression is against the background of the new homelessness eradication policy shift. The move away from a temporary accommodation system, where people experiencing homelessness are often sent either to run-down hostels or offered unsuitable and unsafe places to stay for long periods of time, is clearly overdue and incredibly necessary. But will it deliver?

The new rapid rehousing approach supported by the government is intended to quickly and permanently house people who have made homeless applications to councils and who have minimal or no additional needs – meaning they’re able to support themselves, given a place to stay. In future, those with more complex needs should be supported by Housing First,  with all the additional support it provides.

Housing First is more than just giving someone a permanent place to stay. A crucial part of the programme is wrap-around, personalised support for people with additional issues. This includes institutional involvement, for example drug and alcohol rehabilitation, along with peer support from people who have previously experienced homelessness and who are now able to help others going through the process.

The plan is to move to this approach after transitioning through rapid rehousing, but the new statistics suggest it’s needed far more urgently. Almost half of the homeless applications made last year listed additional support needs; problems with mental health, difficulties managing a house, or drug and alcohol dependencies. The focus on rapid rehousing as a stop gap, with Housing First to follow, doesn’t appear to go far enough when such a significant number of people presenting as homeless require more than what is planned to be on offer as standard.

Read More: ‘Can we end homelessness in Scotland? Aye, we can’: Scottish Government pledges £21m to Housing First

Rome wasn’t built in a day, but a sizeable investment has to be made in these early stages for Housing First to take root. The commitment made by the Scottish Government to eradicating homelessness must be backed with adequate financial support and political will. The concept behind Housing First may be simple, but implementing it across the country will not be easy – and requires strong financial backing.

And while these transitions are taking place, what happens to the people currently on street corners and couches? There have been rises in the number of pregnant women and children in temporary accommodation and a rise in the number of people sleeping rough in these new statistics.

Scottish Green housing spokesperson Andy Wightman has said: “The Scottish Government’s steady-as-we-go approach simply does not work. We must remind Ministers that behind these latest homelessness statistics are real people’s lives in need of help.”

While policy might be moving in the right direction, the question is whether enough substantial change is happening, and at what speed. Today’s figures are a reminder against complacency – Scotland’s homelessness legislation may be world leading but in practice we still have a long way to go.