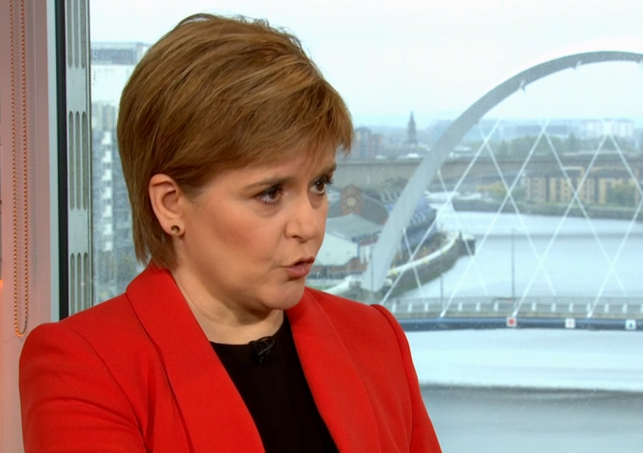 The odd Groundhog Day quality of this year’s SNP conference began to seep in during Ian Blackford’s speech on Monday; a performance of variations (and only barely) on familiar themes. The SNP opposes austerity. The SNP opposes a no-deal Brexit. The SNP opposes Tory welfare reforms. There are perhaps hermits who have abandoned civilisation that remain unaware of all this, but it’s unlikely any of them made the trip to the Scottish Exhibition Centre for a catch-up session.

There is certainly an argument to be made for such repetition – the public’s political attention span can be unpredictably brief, and while the Tories remain in Downing Street, their many attendant injustices aren’t going anywhere. Reminding people of that fact is not only wise but necessary for any party that styles itself as progressive. However, it does pose the question of whether those who assembled in Glasgow were expecting to be told something they didn’t already know.

First Minister Nicola Sturgeon’s address to the party faithful struck a similar tone. This wasn’t a policy platform, it was a collection of her popular hits. A significant early chunk of Sturgeon’s speech was taken up by an invitation to look at all the party has achieved. A new social security agency, which in recent weeks made its first payments. The Baby Box. Affordable homes.

READ MORE: Analysis: New figures show the Union is falling apart in front of our eyes

The freshest revelation was arguably the Scottish Government’s commitment to a ‘Fair Work First’ approach – all very laudable, and possibly effective politically, given that her only Scottish competition on workers’ rights comes from Richard Leonard, a man who could start an internal party battle with his own shoelaces. But still, hardly a grand new design. Sturgeon’s contention that Labour – by which she means UK Labour – “isn’t the workers’ party” gave the game away on whose influence had inspired the policy.

Unfortunately – and this may have more to do with her speechwriter than the First Minister herself – Sturgeon’s address triggered some jarring comparisons, considering the message of the speech was patience. Few politicians should invite comparisons with Nelson Mandela, a leader who was rarely held back by the limitations of pragmatism. “To be truly radical is to make hope possible, rather than despair convincing,” is a lovely quote, until you remember it came from a Welsh Marxist (Raymond Williams, if you’re curious).

That said, it wasn’t all ill-placed revolutionary philosophy. Elsewhere, Sturgeon was nice enough to quote an unemployed woman who had sent in some words of praise – Chelsea Clinton, I think her name was?

The applause, unsurprisingly, reliably rose in response to almost every other line. That Sturgeon is popular with the SNP membership is no secret – indeed, her popularity might explain her almost palpable discomfort with populism; she’s never really required it. This may spell trouble down the road, if you think of populism as something that must be reclaimed from the monsters of the world, and even more so if you think of independence as a proposition that must, to some extent, be populist to succeed. But hey ho.

“You cannot and will not deny Scotland’s right to choose,” she says. You can almost hear the response, as if the stones of Westminster itself are whispering from across the border: “Watch us.”

Sturgeon says the SNP delivers more than rhetoric; so when the Tories do not turn to dust in the wind like a minor Marvel character, what then? What will be the next move? Whither #indyref2? What precisely will the SNP’s role be in a People’s Vote, if that’s where the party is heading? This is, whether Sturgeon likes it or not, what at least some delegates had come to Glasgow in the hopes of finding out.

If Sturgeon is not an adherent to the ‘long game’ strategy for a second independence referendum, she does a damn good job of posing as one. However, she must keep the impatient on-side – hence, one would guess, the refusal to lay out anything beyond the most bare-bones approach to a strategy for deciding on timing, which hasn’t changed since the last time the question was posed, or the time before that, or the time before that…

This may satisfy the party now, but it won’t work indefinitely. You can tell, because this is exactly because we went through it at the last conference. So… same time next year?

That said, Sturgeon’s position is not necessarily unwise. One wonders if those calling for a new independence referendum as soon as humanly possible actually experienced the last one. Do they have any appreciation of the amount of consciousness raising, mass political education, rallying, public debate, proposals, rebuttals, imagination and sheer work that the 2014 campaign vote involved? ‘It’ll be alright on the night,’ is a recipe for a bad Fringe show, not the achievement of national liberation.

In truth, the interesting aspects of the 2018 conference could be found where they always are – the fringe events, rarely attended by more than a few dozen and even more rarely covered by the press, where the often-denied radicalism of the SNP grassroots remains as evident and as vibrant as ever.

Here, you can find trade union militancy, Palestinian solidarity, Catalan republicanism and a renewed attempt to introduce a socialist dimension to demands for a People’s Vote. For those detractors who prefer to believe that the neoliberal moderation of the SNP front-bench is a representation of the entire party, it is in these back-rooms where such a characterisation falls apart, each and every year.

And yet, with each conference, it becomes difficult to avoid the impression that the term ‘fringe’ is more than a technical term. The suspicion creeps in that the party’s radical instincts are kept to such cloisters to keep them away from the main stage. The SEC may be garlanded with enormous, They Live-style banners instructing party members to ‘HOPE’ – or else, one assumes – but it is a managed, authorised, limited sense of hope, and one wonders if efforts have been made to make sure it doesn’t grow wild from ideas that make the high command uncomfortable.

At last year’s conference, in the wake of bloodshed and the suppression of Catalan democracy, Nicola Sturgeon acknowledged the imperfections of the EU; almost word for word, she repeated this caveat this year, and moved on. And why not? Recent days have seen the SNP align themselves more closely than ever with those arguing for a People’s Vote – but the hard work of actually making the case for such a second plebiscite was articulated far more clearly in a meeting of SNP Socialists and the ‘Another Europe is Possible’ campaign than on the stage by the leader of the party.

So, if the SNP’s latest conference was never intended to provide a grand strategy, or a new policy platform worthy of the name, what was it good for? To remind everyone that Brexit has left many of the promises made by Better Together in ruins? If there’s one group of people in all the world that don’t need to be reminded of that, they were sitting in the SEC. To keep the passion of the pro-independence grassroots alive? You may have noticed, but there was a little demonstration last Saturday.

As Sturgeon rightly argued, the case for independence remains strong – if anything, it has only got stronger since 2014. As a cause, it requires direction, and on that score, this speech was little more than a trailer, a teasing preview that, as yet, has not been followed by the main attraction.

A strategy for independence? Coming soon – we can only hope – to a theatre near you.