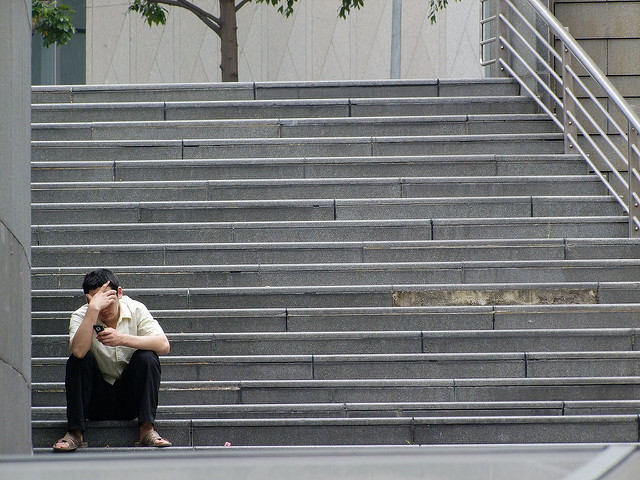 CommonSpace examines the growing problem of stress, and how it has seemingly permeated every aspect of society

SURVEYS, as any pollster will tell you, are an imperfect rubric for determining societal trends with anything more than passable accuracy. Yet this caveat hardly softens the troubling conclusions of a new YouGov poll commissioned by the Mental Health Foundation.

According to their findings, over a third (32 per cent) of respondents have experienced suicidal thoughts or feelings as a consequence of stress.

The survey also found that almost two thirds (74 per cent) of adults felt so stressed at some point over the last year that they were left overwhelmed or unable to cope.

“For many of us there are times when exposure to stressors becomes too frequent or too intense to deal with,” the report observes. “If the stress response is activated repeatedly, or if it persists over time without recovery periods, the physiological effects result in cumulative wear and tear on the body.”

The implications of such statistics are all the more worrisome because of the sheer omnipresence of the problem considered – who doesn’t feel stress?

“Very large numbers of adults in Scotland are experiencing high levels of stress and it is damaging our health.” Lee Knifton, Mental Health Foundation Scotland

Some crumble under it; some thrive on it; everyone knows it. The rich and poor, young and old, in Scotland and beyond. The world exerts pressure upon those who live in it, in countless, often incalculable ways, and like any other phenomenon that cannot be eliminated, it can only be ameliorated. And judging by the Mental Health Foundation’s latest revelations, we are failing to do so.

Lee Knifton, head of the Mental Health Foundation Scotland, put the findings in a national perspective, explaining: “Very large numbers of adults in Scotland are experiencing high levels of stress and it is damaging our health.

“Stress is one of the great public health challenges of our time, but it still isn’t being taken as seriously as physical health concerns.

“Stress is a significant factor in mental health problems including anxiety and depression.

“It is also linked to physical health problems like heart disease, problems with our immune system, insomnia and digestive problems.”

None of this is new – any amount of medical professionals have known about the medical ramifications of stress for some time. Catherine Gamble, professional lead for mental health at the Royal College of Nursing, said in response to the new findings: “Stress isn’t a mental illness in itself. But all mental health nurses know that we are all vulnerable to it and that if left unmanaged, stress can be a precursor to more serious health conditions.”

Yet those who work beyond the various fields of health care, particularly employers, have not collectively caught up with the reality: the spectre of stress – and, too often, the mental health problems that accompany it with increasing frequency – are still not treated as seriously as matters of illness or physical safety.

Speaking on behalf of the Mental Health Foundation Scotland, Knifton said: “We are also asking for well-being days to be provided to public sector workers as part of reducing the pressure on those who work hardest to look after us.”

More must be done to support people at the earliest possible stage so that stress does not spiral into an overwhelming and damaging situation.” Mind chief executive Paul Farmer

Paul Farmer, chief executive of the mental health charity Mind, said: “That a third of people have felt suicidal as a result of stress in the last year is staggering. More must be done to support people at the earliest possible stage so that stress does not spiral into an overwhelming and damaging situation.”

Taken on its own, the Mental Health Foundation’s conclusions would be cause for concern. What indicates a sense of crisis is the fact that they compliment earlier findings so well, much of them pointing towards the same conclusion, and suggesting that our society’s dysfunctional relationship with stress is heading in the wrong direction.

Another, separate new report conducted by the insurance firm Aviva, questioning 4,205 UK adults, found that 67 per cent had been driven to stress by common, widespread issues such as financial worries and the pressures of family and employment. An almost identical number – 64 per cent – suffered from depression.

Dr Subashini M, associate medical director at Aviva, said: “Our mental health is as important as our physical health, however too many people find themselves suffering in silence, with nowhere to turn for support or feeling as though they can’t discuss how they feel.

“Nearly half of us have been, or will be, affected by mental health conditions at some point in our lives, yet for the most part, there is still a distinct taboo in many circles.”

“A persistent pattern of not directly acknowledging and addressing our own – and the UK’s – mental health issues only further reinforces stereotypes and taboos.

“Currently, half of adults in the UK state say they would feel uncomfortable discussing mental health – a mindset that in many cases can actually lead to greater suffering and isolation for those in need who become even more reluctant to speak to anyone.”

“Half of adults in the UK state say they would feel uncomfortable discussing mental health – a mindset that in many cases can actually lead to greater suffering.” Aviva associate medical director Dr Subashini M

The Mental Health Foundation also added to the growing body of evidence suggesting that a mental health crisis is disproportionately affecting the young, with its latest poll finding that millennials – those aged between 18 to 38 – suffered more from work-related stress than the generation that preceded them, with over a quarter of respondents – 28 per cent – stating that their jobs expected that they work through stress as a matter of course.

Richard Grange, a spokesman for the Mental Health Foundation, told the Times newspaper: “Millennials are more likely to have insecure contracts, low rates of pay and high entry-level workloads. The pressures they face in today’s employment market are very different to past generations.”

The millennial experience can, in large part, be attributed to the circumstances under which they have matured – in particular, the shadow of the Great Recession which followed the 2008 financial crisis. In 2011, Professor Tarani Chandola wrote in the British Academy Policy Centre Report ‘The Recession and Stress at Work’: “There has been an increase in job insecurity, work intensity and bullying at work. Job insecurity among public sector workers has doubled since 2009. Public sector workers also report a greater increase in (and higher levels of) work intensity, work conflicts, bullying by managers, and work hours compared to private sector workers – who also report an increase in work-related stressors.

“Even before the onset of the last recession, work stressors had been increasing in Britain since 1992, although this increase has become particularly marked after 2009. Furthermore, the increase in work stressors is greater among female employees who report a tripling of ‘job strain’ between 1992 and 2006, compared to a 50 per cent increase among male employees over the same time period.”

The generation preceding millennials appears similarly afflicted, with an April survey from the Prince’s Trust Macquarie Youth Index found that 51 per cent of those aged 16 to 25 across the UK finding that 53 per cent spoke of semi-constant stress, with one in five describing themselves as regularly feeling hopeless.

In February, a poll commissioned by the charity UK Youth as part of their #KeepMeSafe campaign not only found that a growing number of 18-25 year-olds spend more than six hours a day – essentially the equivalent of a day-job – feeling “stressed out”, but that one in ten felt they had nowhere to turn in order to reveal or address their problems.

For those even younger, the UK’s regime of standardised testing in schools has bred its own wide-ranging stress crisis: a Childline report in 2017 revealed that it had delivered more than 3,000 counselling sessions on exam-related stress in 2016/17, with 22 per cent calling during May – the point in the academic calendar when students are typically preparing for examinations.

Last month, CommonSpace reported on the growing evidence that a mental health crisis faces Scotland’s youth. The latest statistics demonstrate that one of the most potent and prevalent triggers to mental health difficulties, as well as accompanying physical dangers, face those of all ages in the present climate – but the younger you are, the greater the chance you are affected.

In the wake of the tragic suicide of Frightened Rabbit singer Scott Hutchison last week, his fellow band-members wrote on Twitter today: “Don’t ever think there isn’t someone out there who wants to listen to what you have to say. #MentalHealthAwarenessWeek G x”

The sentiment was undoubtedly heartfelt. But when stress – and all its potential consequences – afflicts society on such a scale, then it seems inescapable – as experts increasingly contend – that a society-wide, systemic solution is necessary.

It may be impossible to eliminate stress entirely, but it can be managed, lessened, beaten back. Reforms have now been demanded. How the Scottish and UK Governments respond remains to be seen.