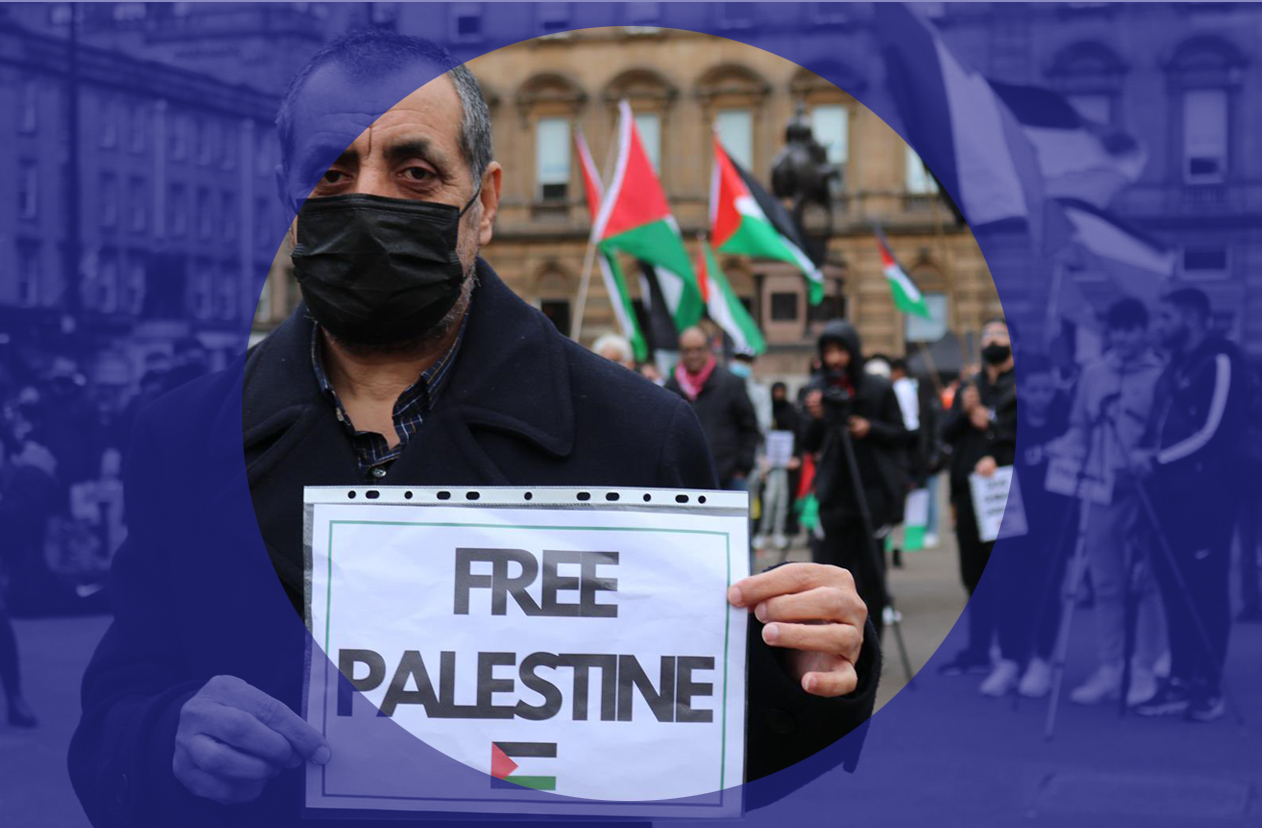 “There are of course things that any government, even those lacking many formal foreign policy powers, can do to help the Palestinians.”

ON TUESDAY 10 May, protestors rallied in Glasgow’s George Square, along with many more mobilised around the world, to protest the latest Israeli human rights violations in occupied Palestinian territory, including the forced eviction of families from Sheikh Jarrah, attacks on unarmed and peaceful worshippers in the Al-Aqsa Mosque, and air strikes in Gaza that killed 20.

Across the Western world, news packages on leading broadcasters followed a familiar pattern – the clock started running at an arbitrary point, in our case the launching of Hamas rockets towards Jerusalem (actually a response to attacks on Palestinians in East Jerusalem), so that incidents could be shoved back into the traditional hole of a ‘sad’ conflict motivated by primitive enmity and complicated by the spectre of a disembodied ‘terrorism’.

This was the narrative developed at CNN and the BBC; right-wing and pro-Israel outlets simply lied. The New York Post claimed that the air strikes which killed 20 in Gaza (10 May) were carried out by a non-existent Hamas air force against Israelis.

The paralysis of western political and media attitudes about the treatment of the Palestinian people, alongside the deterioration into increasingly extreme racism in Israeli society, indicates the deep implication of western power in Israeli human rights abuses.

The official Twitter account for the EU “delegation to the Palestinians” (note – the people, rather than nation-state), offered a familiar formula: “Extremely concerned about the ongoing clashes between Palestinians and ISF in and around HaS/TM and the Old City. We call for immediate calm, all must refrain from resorting to violence.

“ISF must exercise maximum restraint and allow paramedics to enter to provide medical services to those injured. We call on all to uphold and respect the status quo of the holy sites.”

Yet the EU has funded the actual security forces involved in the attack in Al-Aqsa – the ministry for “public security” – to the tune of $2 million.

Meanwhile Emanuele Giaufret, EU Ambassador to Israel, threw the blame squarely at the Palestinians: “Extremely concerned by today’s violence in East Jerusalem. The firing of rockets from Gaza to Israel is totally unacceptable and needs to stop. We need immediate deescalation to step back from the brink and protect civilians.”

This is a recurring problem: western institutions making noises in defence of peace or human rights, whilst simultaneously funding and backing the perpetrators. Mixed messages and buck-passing abound. We are all implicated, with the British state (including Scotland) one of the chief financiers and diplomatic defenders.

The demonstration in Glasgow scored something of a coup by drawing together statements of opposition to Israeli activities in Sheikh Jarrah from the SNP, Scottish Labour and Scottish Greens, raising the profile of public support for the Palestinian cause in Scotland.

First Minister Nicola Sturgeon’s statement to the demonstration, whilst promising to do all in the Scottish Government’s power to stand up for human rights, included the familiar buck-pass: “With foreign affairs reserved to the UK Government I call on them to unreservedly condemn the unacceptable use of force we are witnessing. The UK Government and international community must not remain silent. Any violation of international law must be be investigated by the UN.”

There are of course things that any government, even those lacking many formal foreign policy powers, can do in the present situation. Both of the suggestions for concrete action suggested by Smith could be acted on, even in part, from Scotland. Sturgeon said the ‘international community’ must not remain silent. She could, then, contact the EU and call for them to cease funding to Israel. Scotland could reduce its diplomatic engagement with Israel to nothing by refusing to receive its consulate representation, and any other contact. And various means could also be pursued to reducing trade with Israel.

The UK Government’s Queen’s Speech (11 May) proposed legislation to “stop public bodies imposing their own approach or views about international relations, through promoting boycott, divestment or sanctions [BDS] campaigns against foreign governments”.

This proposal says much about the degradation to which the Palestinians have been subjected. They now lack the right to: vote for their rights, seek legal recourse either domestically or abroad, deploy civil and peaceful disobedience as through BDS, or to engage their legal right to self-defence when under violent attack.

But the Conservative plans to block BDS from within sections of civil society also indicate the very real forms of resistance that a devolved government could advance, should the will emerge.