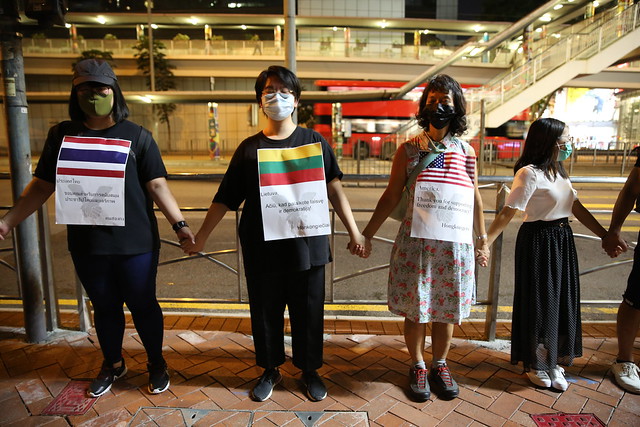 People power is winning in Hong Kong, as the city-state’s governing system – based on the old British colonial model but with Chinese state control bolted on – comes under severe strain

HONG KONG’S rulers have been under siege for over three months – from their own people.

The mass protests have become a permanent feature of the city-state, as have brutal clashes with the police, which have only acted to add new dynamism to a movement that started out being about an extradition law, and became about the whole society; the whole system.

Chief Executive Carrie Lam has declared that the Extradition Bill, which was suspended in June, will now be withdrawn entirely. The protestors have therefore won their original demand, but after weeks of police violence and detention without charge, the movement wants their civil rights upheld, something Lam is unwilling to concede. With seven dead and more than 1,200 detained, it’s unlikely we’ve seen the end of this historic uprising.

To understand Hong Kong you have to understand the history which led to its current official title, which reveals much about its unique governance system: “Hong Kong Special Administrative Region of the People’s Republic of China”.

Sitting on the Southern coast of China, Hong Kong became a British colony at the end of the First Opium War in 1842, when the Qing Dynasty surrendered. The British were then allowed to export opium to mainland China again, after it had been banned and eradicated in 1839 due to the enormous damage it was doing to public health.

Hong Kong became the British Empire’s administrative and financial centre in south-east Asia, with HSBC (now one of the world’s largest banks) emerging as the major financier of the opium trade into China.

READ MORE: Analysis: ‘We are not an island’ – the problem with HSBC’s very British internationalism

In 1984, with decolonisation having already taken place years before across most of Britain’s former empire, an agreement was reached between Britain and China, whereby Britain would transfer authority over Hong Kong to China in 1997, as long as China maintained the economic and political system of Hong Kong for the next 50 years.

This is how the “one country, two systems” governance model of Hong Kong was born: Hong Kong is considered to be part of the Chinese nation, with China controlling its foreign affairs, but Hong Kong remaining un-integrated into the People’s Republic of China’s model of ‘socialism with Chinese characteristics’.

Thus, this governance system is the old British colonial model with an element of PRC control bolted on. The Chief Executive is the head of government and can force the legislature to reconsider legislation. The Chief Executive is appointed by the PRC-controlled State Council, which makes the appointment based on nomination from the Election Committee, a group of 1,200 business, community and government figures.

READ MORE: How the explosion of the Chinese middle class will change the West

Even the legislature (which in theory can impeach the Chief Executive) is an odd combination of democractically elected representatives and ‘functional councillors’, selected from special interest parts of the economy. True to its Sino-British history, Hong Kong therefore lies somewhere between the City of London and the Chinese Community Party in its governance model.

Add into the mix the independence of Hong Kong’s legal system and the huge cultural gap between China and Hong Kong (Cantonese and English are the most widely used languages) and it shouldn’t be greatly surprising that ‘one country, two systems’ is ready-made for conflict.

The tipping point was the extradition bill introduced in February, which would have seen legal suspects transferred from Hong Kong to mainland China. Lam insisted this was to deal with a genuine loophole in the law which meant someone who lives in Hong Kong and was suspected of a crime in Taiwan, as was the case in a 2018 murder, cannot be extradited. But the Bill was widely seen as a way for China to exercise greater control, and the mass wave of resistance that emerged has forced Lam to back down.

“Regardless of what happens next, the anti-extradition uprising has once again shown that people power can win, even in confrontation with a super-power like China.”

The dimensions of this leaderless movement are interesting: while mass demonstrations have played a key role, of equal importance has been smaller but more militant actions such as the shutting down of a major international airport. Attempts to divide the movement between peaceful and violent protestors have largely failed, with the glaring violence of the police taking prominence in public debate.

The withdrawal of the Bill is a major defeat for Beijing, which is widely known to be the king-maker of Lam’s regime. In fact, a recording has emerged of Lam telling Hong Kong business leaders that she would have resigned already “if I have a choice”. As China has grown to be a major global power in the 22 years since the transfer of Hong Kong, it has also sought tighter control of the “special administrative region”. President Xi Jinping’s reign since 2016 has been one of a crackdown on the mainland, including the horrific, Orwellian treatment of China’s Uighur Muslim population. Hong Kong is a blemish on the image Xi has tried to cultivate of himself as a strong nationalist leader.

The PRC have indicated at certain times that they may be willing to send the troops in, an intervention which would surely bring to an end ‘one country, two systems’ by force. So far they have not done so, but regardless of what happens next, the anti-extradition uprising has once again shown that people power can win, even in confrontation with a super-power like China.