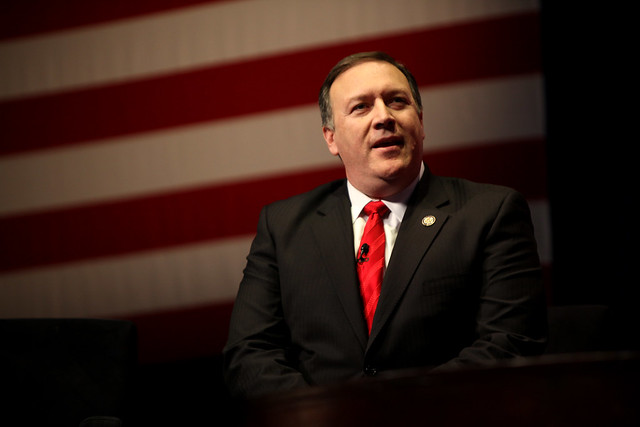 AS UK POLITICS becomes engrossed in the theatre of a Tory leadership contest, an altogether more serious development came to light on Sunday [9 June].

The Washington Post reported on a leaked recording of US Secretary of State Mike Pompeo appearing to say to an audience of Jewish leaders in New York that the US Government would intervene to prevent Jeremy Corbyn becoming Prime Minister of the United Kingdom.

Asked: “Would you be willing to work with us to take on actions if life becomes very difficult for Jews in the UK?”, the US Secretary of State responded: “It could be that Mr Corbyn manages to run the gauntlet and get elected. It’s possible. You should know, we won’t wait for him to do those things to begin to push back. We will do our level best. It’s too risky and too important and too hard once it’s already happened.”

It’s hard to see this remark from Pompeo, the highest diplomat in the land and former head of the US’s foreign intelligence agency, the CIA, as anything other than a threat to intervene in the domestic affairs of another democratic, sovereign state. Since the US Government has refused to offer any comment on the leaked remarks, never mind an apology, there’s little other conclusion that can be drawn.

Could anything be more serious for UK democracy? This is the most powerful state in the world, with a military bigger than the rest of the world combined, with a global state surveillance reach that we know from Edward Snowden’s revelations can see and hear into almost anywhere with a phone and a laptop at any time, and their top diplomat is implying that they will act to undermine the democratically elected leader of the UK if needs be.

And there is a context here, too. The remarks come just off the back of US President Donald Trump’s visit to the UK, where before he even landed he was attacking London’s Labour mayor Sadiq Khan, and advocating for Boris Johnson to be the next Prime Minister and Nigel Farage to be involved in the Brexit negotiations. Trump said he turned down a meeting with Corbyn and described him as a “negative force”. Add all this together, and it strongly suggests that the United States Government either is willing to, or is already, interfering against Corbyn and the prospect of him forming a government.

Yet, despite the seriousness of the Pompeo revelation, and the response from the Labour Party that it was an “entirely unacceptable interference in the UK’s democracy”, the UK state broadcaster the BBC has published not one article on the issue. Radio silence. Ditto the UK Government, which insists (despite vast evidence to the contrary) that it respects the domestic affairs of democracies around the world, but isn’t willing to defend the domestic affairs of its own country.

Imagine if a leak emerged of Russian President Vladimir Putin suggesting that he would “not wait” for Boris Johnson to come to power and pursue any of his bigoted agenda’s against minority communities, Muslims for instance, in the UK before the Russian Government “push back”. Rightly, there would be uproar about Russian interference in UK democracy, the government would be under pressure to do more than just issue tough-sounding statements, and the BBC would be covering it night and day.

Infact we don’t need to imagine it. We know that US politics has been besotted with the notion that the 2016 presidential election was stole away from Hilary Clinton because of Russian interference. The hypocrisy that the US constantly displays – look no further than it’s open attempts at a coup in Venezuela – is on show once again, and once again the Establishment is suddenly found to be looking the other way.

As writer George Monbiot stated on twitter in reference to the US and the Pompeo remarks: “They did it in Latin America, Africa and Asia. Now the US government wants to overthrow democracy in Britain. Still waiting for a UK government spokesperson to express their outrage. Hello???”

And this should be a concern for the Scottish Government too. We should be in no doubt that the US Government would also happily interfere to prevent or undermine Scottish independence if it fell like it was in its strategic interest to do so. Independence supporters should lock arms with democrats across the UK to tell the Trump and Pompeo: ’hands off’.

And if you are still in anyway unsure about whether the US really would interfere in the domestic democratic affairs of an ally, take it from the horses mouth: here’s Pompeo just months bragging about how the CIA “lied, cheated and stole” under his watch.

Pompeo is the real face of US imperialism. His intentions have nothing to do with protecting British Jews, or any other minority in the world, and everything to do with American global hegemony. How could it, when he presides over a regime which issued a ‘Muslim ban’ and assinuated that Mexican immigrants are all rapists and murderers? No one should be confused about what is really going on here.