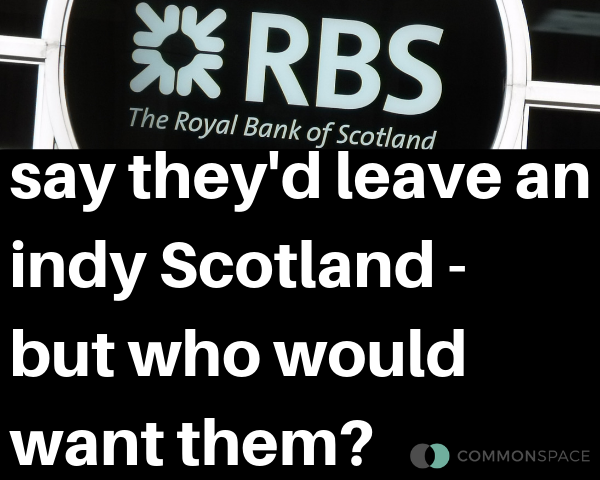 THIS week (5 August) Ross McEwan, the outgoing chief executive of the Royal Bank of Scotland, told a swanky press dinner that his bank would leave an independent Scotland for London.

The reasons he gave for moving headquarters are the boldest imaginable statement of the power of the big financial houses in modern Britain.

He said that in the event of independence, “the balance sheet size of this thing [RBS] would just be too big for Scotland. £730-odd billion – you can’t support it.”

What he meant by this is ‘you don’t have enough money to give us when we collapse again’.

There was a time when bankers and industrialists styled themselves as men (as typically they were) of destiny; of rugged individualism who held up the sky of contemporary society. The rich were the ‘wealth creators’ upon whom workers and the poor relied.

Today they make the routine, brass-necked assertion that they are always on the verge of collapse, and that when they do collapse they will be ‘too big to fail’, in the parlance of the 2008 financial crisis, and just as then the public will have to fork out to save the them.

It is a stunning admission of the complete evaporation of the moral case for monopoly capitalism. No more need for the pretence about geese laying ‘golden eggs’ or ‘trickle down economics’. The mantra of RBS appears to be – ‘we are a totally dysfunctional shambles, but we are also a hand grenade under your chin – so get ready to give us all you money when we screw it up again’.

So why should Scotland, or any country, even want to play host to this parasite?

McEwan is right, in a sense. A relatively small state, in the early years of its independence does not want to be shackled to the zombie of massive, calamitous finance capital.

RBS was of course one of the institutions centrally involved in the financial crisis in 2008, deploying wreckless lending practices that left it dangerously over-exposed.

After its dodgy dealings helped sink both the UK and world economy, it demanded governments drain their own coffers to keep it alive.

The British public spent tens of billions of pounds to save RBS, and much more on the wider financial sector. Across the western world, hundreds of billions were pumped in to keep these institutions alive – a sum which has only increased in the decade-plus of turbulence since. RBS executives admit we will never see all this money paid back.

They demand instead that the public sell of its remain shares in the bank, at a fraction of the value on which they were bought, at breakneck speed and with no consultation of the public themselves.

When asked, just 9 per cent of the public want the government’s scheduled sell-off to continue, while two thirds want the government to maintain a majority share. One third want the bank nationalised in its entirety and turned over to public service.

But then, the public don’t get to decide what happens to their property. The banks and their friends in the Tory party do.

While austerity devastated the UK, RBS officials fed themselves hundreds of millions in bonuses from the pilfered money. Even in 2010, as the bank lost £1.1 billion of taxpayers’ money, bank officials awarded themselves almost £1 billion in bonuses.

Were the bank to crash in an independent Scottish state, it is fair to assume that is where money for hospitals, schools and housing would go.

And an RBS based in Scotland wouldn’t be leeching off only the public purse.

Papers leaked from RBS in 2016 showed that thousands of small businesses customers had been helped into liquidation by the bank’s Global Restructuring Group, and then asset stripped by another wing of RBS. Small businesses in Scotland would be subject to this kind of predatory behaviour, and much else besides.

At the time of the financial crisis, some mainstream economists referred to the business activities of the big banks as ‘socially useless’. This is perhaps too kind, given the enormous destruction they created. But it is true that most citizens of an independent Scotland would have nothing to gain from the presence of RBS.

Perhaps some imagine that a post-independence RBS might be different. But all the signs from the SNP Growth Commission report indicate that Scotland would maintain the UK’s feeble financial regulations – purpose-designed to let banks off the leash.

In reality, these self-destructing, socially useless and economically mutilating monster-banks like RBS should be broken up and their wealth put to meaningful ends.

The very last thing that we should be worried about is their departure.