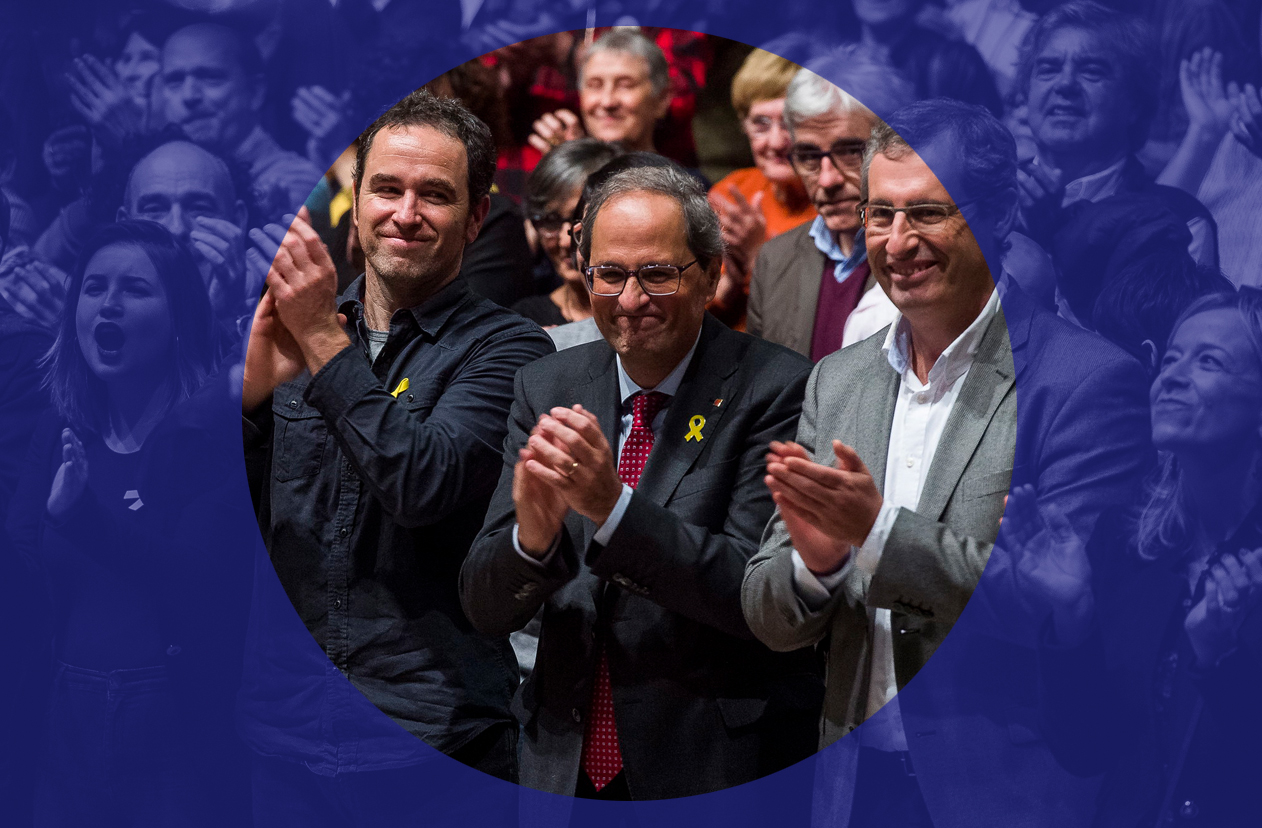 “Like the Catalan movement, Scots may face an allied UK and European apparatus increasingly disrespectful of democracy and focused on the interests of the already institutionally dominant.”

THE NEWS that Quim Torra has been removed from the office of president of Catalonia for 18 months by the Spanish supreme court underlines the characteristic reaction of the Spanish state to democratic threats. Torra now joins the annals of his antecedents, all but one of whom saw their administration cut short by Madrid.

The removal of Torra is only the latest in a long line of coercive measures, ranging from the law to the billy-club, employed since the 2017 Catalan referendum on independence. It is distinguished from that record only by the extreme pettiness of the charges – that he hung bunting from his office building in solidarity with his compatriot political prisoners.

In a speech to the nation after the court ruling, Torra distinguished the post-Francoist political regime from what he saw as equitable statehood: “The decision is clearer than ever. And you have to choose between democracy and freedom, or repression and imposition. A Catalan Republic grounded in civic engagement, or a Spanish Monarchy defined by armed forces and flags.

“I am very proud to be on the side of the democrats in this conflict. And I am very proud of the strength and commitment of the vast majority of Catalans.”

We should, therefore, not underestimate the historical particularity of the Spanish case. Nonetheless, even though Torra appealed to the Europe for absent help, we must also accept what is general in the Catalan plight.

Catalonia, after all, is about as established in the material interests, cultural traditions and popular imagination of European identity as any place can be. The wealthiest part of the modern Spanish state territory, it draws tourists from all over the world. Barcelona is one of the largest and most iconic cities in the EU. The suppression of the rebellion in Catalonia has been as high profile as it has been blatant in its brutality.

And of course, though the Catalan movement is marked by a great pluralism and by several political forces, it is formally led by centre-left and centre-right parties and has been for decades.

Figures like Torra are closely tied in to local business communities, the extended civic order and the international community. Torra himself hails from the Christian Democratic tradition, which has dominated western continental capitalism since the end of the second world war. His co-traditionists are the most powerful force in the EU (largely through the overweening influence of Germany). He and other centrist Catalan politicians are not revolutionary agitators – they are suit-and-tie politicians with a national grievance.

The very fact that such political figures can find themselves in such consistent and severe conflict with the central Spanish state is itself indicative of the peculiarities of the region’s politics which must be borne in mind. What kind of centre-right politician is willing to be jailed for their beliefs? Answer: one whose parents and grandparents faced jail or worse in the same cause of national autonomy.

So the drama of state repression is a signature of Spanish and Catalan history. Yet it still highlights the problems of democracy across Europe, and as they manifest in Scotland.

It remains the prejudice of the leading tendency in the Scottish independence movement that ‘the international community’ will respond to good behaviour. Recent days have seen the return of a rather narrow debate about independence plans ‘A’ and ‘B’ that, for all its misconceptions, has at least exposed the degree of dependence on the idea that a state willing to openly break international law (not to mention the crimes of empire) is somehow vulnerable to moral force alone.

Despite the officialdom enjoyed by Catalan leaders, not to mention a fulsome democratic mandate, the vaunted ‘international community’ has remained aloof, refusing to intervene against arbitrary infringements of an established democratic process.

In Catalonia as around the world, demands on the EU in particular are moving past trenchant to exasperated. Rory Steel, a Scottish solidarity activist who has organised to improve links between activists in Scotland and Catalonia told Source: “Spain’s revengeful crackdown on human rights and Catalan democracy has gone unchallenged by the EU yet again. If the EU wants people to believe its claim that it protects human rights, then they must begin measures to suspend Spain’s EU membership.

“This is already long overdue. Today’s decision to remove the democratically elected leader of Catalonia, Quim Torra, is just one authoritarian act of many that Madrid has inflicted.”

Though the devolved settlement is under pressure in the UK, from both the UK internal market designs of the UK Government and (pulling in the other direction) the divergence of devolved administrations over Covid-19 response, we are not likely to witness a sudden attack on electoral processes, nor a rounding up of elected officials by London.

But nor would a second bid for Scottish independence invite the support of establishment forces at home or abroad, no matter how well turned-out that bid may be. Like the Catalan movement, we would face an allied UK and European apparatus increasingly disrespectful of democracy and focused on the interests of the already institutionally dominant. And just as in Catalonia, the best defence would be mass politics and self-reliance.