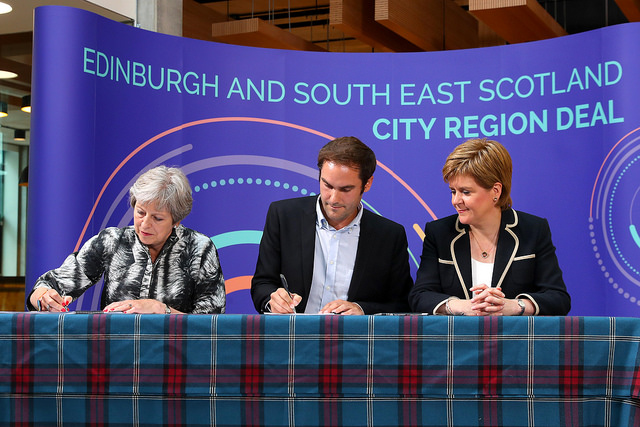 PRIME MINISTER Theresa May and First Minister Nicola Sturgeon met in Edinburgh yesterday (8 August), ostensibly to discuss a new city deal for Edinburgh and the South East of Scotland.

Inevitably, that business quickly gave way to the latest iteration of the ongoing standoff over Brexit and its potential economic and constitutional impact. Amidst a chaotic and uncertain Brexit negotiation process, both leaders are trying to maneuver for advantage.

We look at both leaders’ summit statements and what they mean for their respective political strategies.

1. “What the government has put forward in the Chequers agreement and the White Paper is a proposal that delivers on Brexit, that ensures we bring an end to free movement and the jurisdiction of the European Court of Justice, which protects jobs and livelihoods and is good for every part of the UK.”

2. “What I want to see is as we sit and negotiate that deal with the EU, I think it’s incumbent on the Scottish Government to support the proposals, to be speaking up for those proposals in Europe, rather than sowing the politics of division.”

READ MORE: Theresa May lays out ‘hard facts’ in her Brexit speech

Why May said it:

1. May’s first paragraph directly addresses the pro-Brexit dissidents in her own party, who are increasingly fractious since she imposed her Chequers deal on the cabinet in July. The resignation of Brexit ‘big beasts’ including former Brexit minister David Davis and former foreign secretary Boris Johnson undermined May’s authority with a section of her backbench MPs, among Tory party members and activists, and gave a minor boost to Ukip and other critics on the right.

So May’s first port of call is speak to a faction of her own party, before addressing the fears of anyone in Scotland.

2. Her second statement is directed at the Scottish Government, making demands of the government she knows they cannot and would not accede to – that they back the Westminster Government’s proposals against EU negotiators. This is really an address to those on the right in Scotland who the Scottish Conservatives are attempting to cultivate, and an attempt to portray the Scottish Government as disloyal to UK priorities.

3. This third statement is a favourite Scottish Conservative talking point, which is repeated at regular intervals. Public statements on the subject of Brexit and Scottish constitutional ramifications almost always include it. The ‘UK single market’ – or here ‘internal market’ – as an institution directly comparable to the EU single market doesn’t exist. But the hope is that sheer force of repetition will make it a talking point the SNP and the independence movement would have to respond to, should the constitutional situation become even more strained and demands for an independence referendum more assertive.

4. To round up, a statement riddled with fairly aggressive politicking, the necessary nod to consensus and the reassertion the UK national interest. Perhaps not including it would be considered impolite.

1. “With every day that passes, the prospect of a no deal Brexit or a Brexit with very, very little information about the future relationship seems to become more and more likely.

2. “Both of those outcomes would be completely unacceptable, absolutely disastrous for our economy, so I hope she can reassure me that neither of those things are going to happen.

3. “But if she can’t, then I hope she will outline her plan B, because we cannot simply take a step off that Brexit cliff-edge next March without knowing what comes next.

4. “If the PM continues on her current track, trying to pretend that the Chequers deal – which even within her own party seems to be dead – is the way forward, then there’s a risk we end up there and that cannot be allowed.”

Why she said it:

1. It’s par for Sturgeon and any politician in opposition to the Tory Brexit process to cite ‘uncertainty’ as a destructive consequence. But recent weeks have added weight to these attacks.

Comments from international trade minister and last of the three original Brexit ‘big beasts’ Liam Fox that a ‘no deal’ Brexit is now the most likely conclusion have been partly motivated by internal Tory tensions. But that doesn’t make them any less alarming to businesses and much of the public alike.

Sturgeon no doubt now feels well positioned to expose Conservative opponents to that anxiety, which she has partly helped to curate. Such anxiety has been further highlighted in the Scottish Parliament by the broad cross-party refusal to provide consent to the main piece of Brexit legislation in May.

2. Sturgeon knows May can provide no such reassurances. She’s too busy balancing the factional fight within her own party with her desire to arrive at something approximating her Chequers deal, which would amount to a relatively ‘soft’ Brexit – but one with bespoke qualities that the EU leadership are unlikely to accept.

3. Again, Sturgeon doesn’t expect a ‘Plan B’ as such to emerge from May’s nightmarish conundrums. But when it fails to emerge (in the short run at least) Sturgeon can continue to wave this in front of the rough political consensus she has helped to fashion, in front of the business community and the country as a whole.

4. Finally, Sturgeon looks to twist the knife, highlighting Tory party divisions and May’s own weak standing among her colleagues. Her final assertion that a dysfunctional Brexit “cannot be allowed” presents and image of intransigent strength. But whether Sturgeon can actually produce a coherent or lasting anti-Brexit bloc from elements, including big business, who are hostile to Scottish independence remains unproven and very uncertain. Especially should the ultimate answer to Brexit be a second independence referendum.