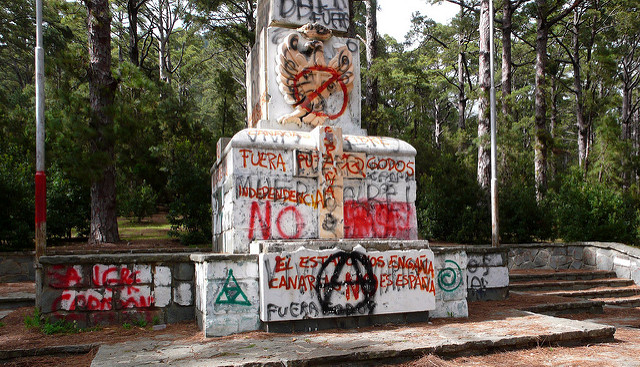 Ben Wray examines what’s behind the emergence of far-right in Spain as an electoral force, the first breakthrough for Falangists in the post-Franco era

THE regional elections in Andalucía, the largest region of Spain on its southern coast, on Sunday [2 December] has seen the far-right finally arrive on the Iberian Peninsula as an electoral force, with nowhere in Europe now free from the scourge of fascism’s revival.

Vox – a Falangist split from the PP in 2013 – won 12 seats, 11 per cent of the vote, up from 0.5 per cent in 2014. In parts of Andalucia which 80 years ago saw massacres by Franco’s falangists during the Spanish Civil War, which today suffers youth unemployment of over 50 per cent, those nostalgic for the return of the days of dictatorship have become serious players in local politics.

The election was a disaster for the left, with Andalucía being a stronghold for the centre-left PSOE for decades (they had governed in the region for the past 36 years), but despite remaining the largest party they saw their number of seats fall from 47 to 33. The radical left coalition around Podemos, Andalucía Adelante, saw its vote fall by six per cent, from 22 to 16 per cent,

Thus the left now commands less than 50 per cent of the vote in Spain’s poorest region, with the right-wing Ciudadanos doubling its vote from 9 to 18 per cent. PP, who fell from power in June this year after yet another corruption scandal, saw its vote drop to 21 per cent. Neither PP and Ciudadanos or PSOE and Adelante can command a majority in a region which, until the Eurozone crisis in 2010, was dominated solely by PSOE and PP.

EXPLAINER: What is Vox?

But it is the rise of Vox which will rightly draw most attention across Europe, ahead of further regional elections, European parliament elections next year and a General Election likely in the near future, with Pedro Sanchez’ minority PSOE government unable to pass a Budget.

How did Vox do it? The two obvious sparks for the far-right’s rise have been the increasing number of refugees from North Africa and the Middle East coming to Spain and the Catalan independence crisis.

50,000 migrants have arrived in Andalucía this year with Spain, rather than Italy or Greece, now the main destination for refugees travelling to Europe. Central to the pitch of Santiago Abascal, leader of Vox, is tough talk on deporting refugees and virulent opposition to “extreme Islam”.

The 2017 Catalan crisis led to the first Francoist protest movement in Spain since the dictator’s death, with PP and PSOE both accused of not being tough enough on the independence movement, despite the jailing of elected Catalan ministers and suppression of the independence referendum. The far-right has grown in strength out of this re-emergence of reactionary Spanish nationalism, and found a new target in President Sanchez, who has sought to exhume Franco’s body.

Underlying the flashpoints of the refugee situation and Catalan crisis is much deeper economic and political alienation with a weak recovery from the Eurozone crisis in 2010 and deep corruption of the Spanish state. This combination had led to the emergence of Podemos as a radical left anti-establishment force which pulled votes away from PSOE, then Ciudadanos sought to appeal to younger voters alienated by PP on the centre-right. Vox is a sign that the Falangist elements, which had never gone away and were always bubbling just under the surface of PP, have seen what has happened in France, Italy, even Germany, and wanted a piece of the action. Abascal appears to have been the leader to do it.

Election analysis of the Andalucían election by Europe Elects found Vox did “stronger in urban municipalities with high average age, high average income, high average education”. This rings true with the general analysis of the Vox base being generally older, upper middle class Francoists, fed up with the PP. But it has also won some votes from the new anti-establishment forces of Podemos and Ciudadanos.

What emerges is a fractured picture in Spanish politics, with strong pro-independence forces (generally progressive in nature) in the Basque Country and Catalonia, two Spanish parties of the left and three of the right and far-right. Spanish politics, previously a stable if corrupt entity in the post-Franco era, has exploded all over the political map.

As late as 2017, a study in the Royal Institute examined “the Spanish exception”: a country with immigration, deep inequalities and political turmoil, but no move towards the far-right.

“Very few European countries have proven immune to the appeal of right-wing populism. The exception is Spain: despite economic crisis and fast-eroding political trust, Spain has not seen any right-wing populist party obtain more than 1 per cent of the vote in national elections in recent years,” senior analyst Carmen González-Enríquez said.

González-Enríquez identified three factors which had prevented the far-right’s rise in Spain: the political demand for extreme right ideas was “very small”, with anti-immigrant sentiment rising but still “well below” the EU average; the political offer from Falangist discourse Falange “is obsolete and of little resonance to the Spanish population” and too associated with the explicitly Francoist elements “which has divided into many small groups”; and the political framework, which made it “much easier to gain a foothold as a concentrated local party than as a small nation-wide party”.

Vox has appeared to overcome at least some of these challenges, although whether it can break out of its upper middle class base and reach wider sections of voters across the whole of Spain is still to be seen. But the time for complacency about the rise of fascism in Europe should be long gone – Spain shows even the recent memory of Franco is no barrier to its resurgence. A Eurozone which embeds austerity and restricts state planning/intervention cannot address the economic anxieties which act as a breeding ground for the far-right to exploit.

And as a final note: it may be time for those on the Spanish left who saw Catalonia as the nationalist threat to have a re-think. Spanish nationalism is where the real danger for progressives lies.