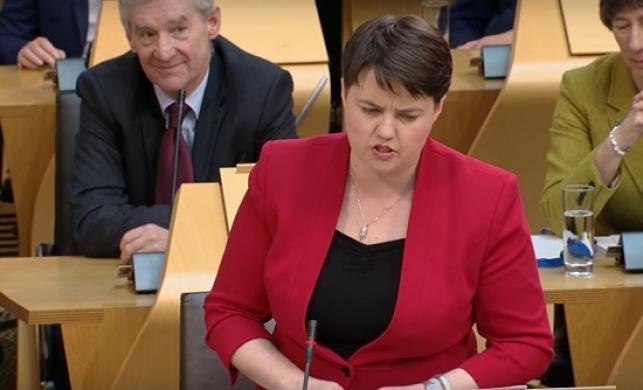 IN THE desperate September days before the 2014 independence referendum, when the British state suddenly realised defeat was possible, Davidson was asked during a debate what about if there was a No vote in the Scottish independence referendum and a Leave vote in the 2016 EU referendum. She said she wanted the UK to stay in the EU and secure a better deal, but that the referendum probably wouldn’t happen because the Tories were not likely to win the 2015 General Election anyway. “Not likely by the polls,” she said.

New Statesman journalist George Eaton reported this at the time as a sincere comment, saying: “She broke one of the iron laws of politics: never talk down your own side’s chances.”

The idea Davidson was remotely concerned at that moment with anything other than saying whatever was necessary to get the No vote over the line was wrong at the time, but in hindsight the notion is ridiculous. By the time the Tories won the General Election nine months later, everyone had forgotten.

Time is a valuable commodity for politicians – the longer the distance, the less they are held to account for their statements.

It’s almost three years since Davidson said that the UK Government should not block a Scottish independence referendum. 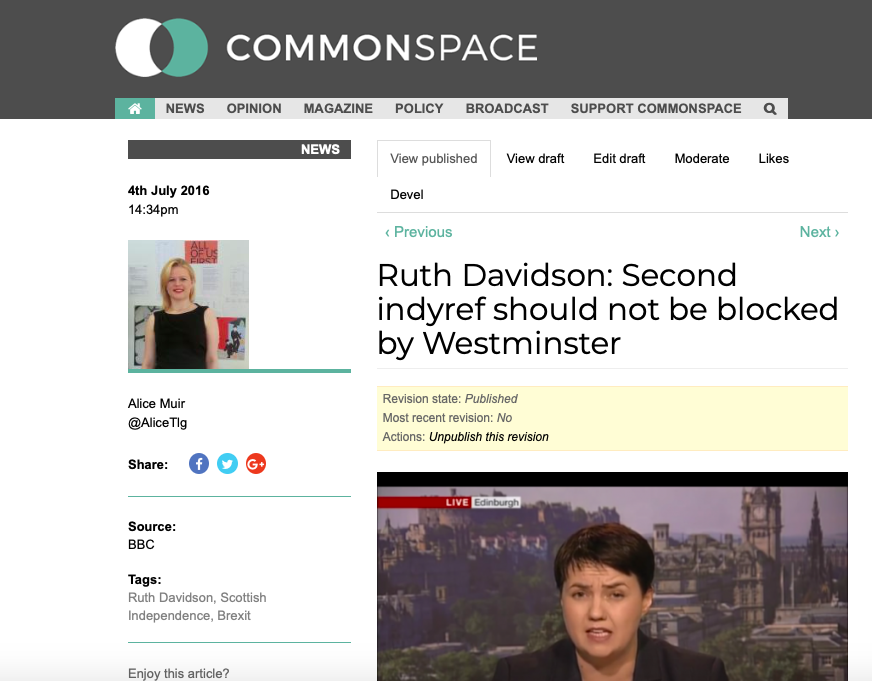 “Constitutionally the UK Government shouldn’t block it, no,” she said.

That was less than two weeks after the EU referendum result, when Britain voted to Leave and Scotland voted to Remain, and there was a surge in energy, including from non-typical sources, around the idea that Scotland’s right to national self-determination should be activated again. Davidson sensed the mood of the moment, and backed away from belligerence.

Three years on, with Brexit-fatigue well and truly set in and fossilised, the mood has most definitely shifted. With little swing votes to be won from seeking to acquiesce to Scotland’s democratic rights, Davidson’s u-turn on blocking a referendum – made on her return to work after maternity leave – is not surprising.

Given the Scottish Tory leader’s track record on saying one thing in the past and another in the present, her argument that there should not be a second referendum because Nicola Sturgeon in 2014, at that time deputy leader of the SNP, said the vote was “once in a generation”, is not without irony. The Scottish public can judge Sturgeon whichever way they want on her prior statements – it has nothing whatsoever to do with the democratic rights of the Scottish people.

READ MORE: Nicola Sturgeon: Legislation for indyref2 will be introduced in May

The facts are that a democratic mandate for an independence referendum was secured by the SNP in the 2016 elections, with the pro-indy Scottish Greens assuring that there is a majority within the Scottish Parliament to give effect to that mandate. Davidson has argued that Sturgeon promised only to pursue a referendum if they were significantly ahead in the polls, but the First Minister’s “triple lock” ahead of the 2016 election had no such stipulation. The triple lock on independence was: a) that circumstances would have to “materially change”, with the example given of Scotland voting to Remain in the EU and the UK as a whole voting to Leave, b) a mandate is won for a referendum in the 2016 Scottish elections, c) an independence majority in a legally binding referendum.

Of course the facts mean little to Davidson, it’s all about the politics, and she knows that her vote has hardened against any more constitutional upheaval, and there may be some votes to be won from Labour and the Lib Dems by presenting herself as the hammer of the nats. It so happens that that position will be perfectly alright to whoever replaces May as Prime Minister, who will be looking to put Brexit to bed and move on from anything which even smells like more referendums.

Davidson will be sensing that out of the Brexit crisis could come an opportunity. If a soft Brexit can now be secured, she can seek to sell herself to the Scottish people in 2021 as the great moderating force on her party, who can stabilise Scotland and the UK after the rocky ride of 2014 and 2016. She’ll argue that the alternative to Davidson as First Minister is the prospect of more constitutional rupture with the SNP, or Jeremy Corbyn’s lackey in Bute House. It’s a narrative that will never secure a majority, but her hope is that an anti-politics, ‘fed up with the lot of them’ mood could carry her to minority government.

It’s a long shot, but not impossible. And there’s a danger that two parts of the SNP’s strategy could play into her hands.

One issue is the continual playing up of the “chaos” of Brexit, which discredits the Tories, but also throws mud on all constitutional change in the process. If soft Brexit is secured and the UK ship is steadied, it leaves independence poorly positioned.

The second is Sturgeon’s latest ploy of not pushing for a section 30 order until closer to the 2021 Scottish elections, probably in about one year’s time. While this gives the First Minister 12 months of breathing space, it doesn’t build up pressure over a section 30 order in the mean time, while making the next Scottish election inevitably all about that when Number 10 officially turns down Sturgeon’s request. That may be an election battle which Davidson relishes.

What this points to is the need to re-state democratic principles firmly. It is a disgrace that both Richard Leonard and Davidson are seeking Westminster manifesto commitments from their respective parties to shut down Scottish democracy in 2021. They are saying regardless of how you voted in the 2016 elections or want to vote in the 2021 elections, Scotland’s right to self-determination is over until our parties at Westminster say otherwise. That anti-democracy message can only be countered with a vigorous defence of democratic rights.