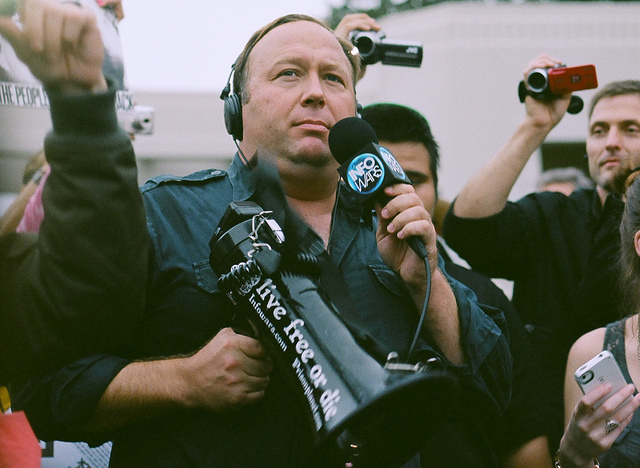 ALEX JONES, a US conspiracy theorist and rightwing activist this week had his ‘Infowars’ media operation effectively shut down by major social media companies.

Youtube, Facebook, and Apple’s iTunes have all unpublished channels and materials with audiences in the millions on the basis that they violate newly enforced codes of conduct.

The corporate takeover of the public square

The explosive growth of social media platforms over the past decade has fundamentally altered the face of the internet, the media, and how communication works in modern society.

As well as unprecedented forms of mass, participatory communication, these platforms are big business. Facebook’s net worth is currently $138.8bn, but its market capitalisation – i.e., what the market estimates the company’s worth to be – ranges between $346.4bn and $468bn. Investment bank Morgan Stanley has estimated Youtube’s value at $160bn were it an independent company, though it is currently only one arm of tech giant Google.

Their untrammeled expansion, and the regulatory complacency that powered it, was suddenly hit in March 2018 by the Cambridge Analytica revelations. Public fears about privacy and corporate and political manipulation, as well as complaints about widespread harassment and hate crime, forced sites to adopt stricter rules on content and enforce them. Facebook and YouTube claim Jones’ violations of these rules led to the clampdown. Today (8 August) Twitter declined to suspend Jones because they said he had not violated their rules.

READ MORE: Mick Cloucherty: Why there’s not too much sympathy for ‘Count Dankula’ in Glasgow’s comedy scene

The danger for the social media giants is they now face the danger of being inundated with complaints and perceived as biased should they not apply these codes of conduct equally. The danger for the public is that new rules are weaponized or applied censoriously.

On top of all that, the final repeal of Net Neutrality (which is supposed to guarantee internet service providers offer equal access to all online content) in the US this past June means there is a real feeling in the tech world that the Wild West days are over.

Alex Jones cut his teeth as a DIY online commentator who blended libertarian economic ideas with conspiracy theories about authoritarian plots – a US national tradition with roots in the 1800s, once referred to by historian Richard Hofstadter as the ‘Paranoid Style in American Politics’.

Paranoid Jones’ views certainly are, but even by the standards of conspiracy theories his are eccentric. His guiding theme is that a shadowy cabal aim to reduce the global population by 80 per cent.

While his ideas were always wild, Jones used to focus on opposition to what he deemed state authoritarianism, surveillance, police and military violence. But through the Obama years his ideas morphed into a more overtly reactionary creed. His main targets became immigrants, Muslims, members of the LGBT community, feminists and activists.

READ MORE: ‘68, ideology and the alt-right: Are the Left the conformists now?

He became a key cheerleader for Donald Trump during his 2016 presidential campaign – a favour Trump returned by appearing on his show and praising its host. Jones excelled himself with claims that then-President Barack Obama and Trump’s 2016 rival Hillary Clinton were “daemon possessed”, smelled of sulphur, and were preparing to launch a catastrophic nuclear war.

Throughout this entire period, Jones’ mainstay was attacking the left and victimising marginalised social groups. It was only after the Cambridge Analytica and related scandals erupted, and political and business pressure started to be exerted on social media companies, that Jones and his followers began to campaign against ‘online censorship’. Pathetic attempts to set up alternative social media sites for the far right milieu collapsed, demonstrating how limited the alt right’s reach is when deprived of the corporations upon which they traditionally rely.

One of the last acts in the campaign to save Infowars was an attack by a group of his supporters on a socialist bookshop in London. To the bitter end, Jones saw ‘the left’ as the threat, rather than the wealthy elite who now host so much of public discourse.

Its little wonder that what appeared from the outside as a coordinated expulsion from several leading platforms has allowed Jones to portray himself as a martyr for his conspiracy crank cause. He has told followers that Google is about to shut down all comment by “conservatives”, a claim destined to join his already enormous record of failed predictions.

Of course, Jones alleges his wild theories evidence or no, and an audience willing to believe that a shadowy conspiracy is trying to rid the world of men by lacing the water supply with estrogen, or that western civilization is under threat from “literal vampire pot-bellied goblins” is evidently willing to believe the worst anyway.

But what the shutting down of Jones’ operation does point to is the very real danger of corporate censorship of the internet. A censorship which the super wealthy have more cause to deploy against the left.

Jones and his co-thinkers are vulnerable to censorship and suppression because in their worldview a shadowy conspiracy, rather than rich and powerful individuals, corporations, states and institutions who operate in plain sight, are the threats to democracy and the expression of dissent.

And since a defence of private property and corporate ownership plays an important role in the far right’s offensive against the emergent socialist left in the US and parts of Europe, they are ideologically incapable of resisting these real threats. Indeed, large parts of the far right are directly funded by wealthy patrons.

Criticism of the media and of corporate influence online is rife and only likely to increase in coming years. At the heart of that criticism must be a demand for freedom of communication and expression unfettered by unequal wealth and ownership. That is a debate that the right cannot advance.