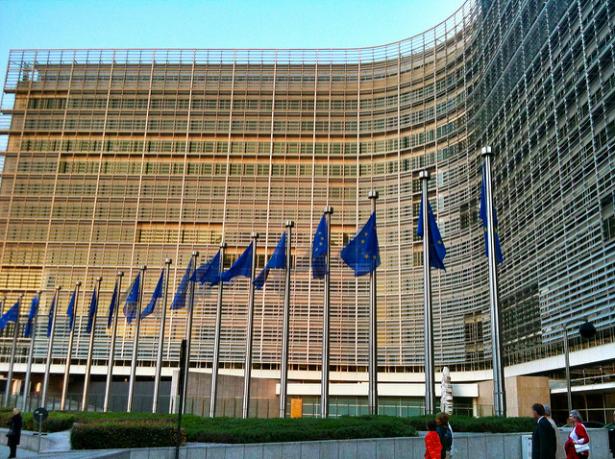 With the futures of British Steel and Bifab in doubt, and the need for a Green New Deal ever more urgent, should we have been having a different debate about the EU over the past decade?

AS MILLIONS of people across the UK vote today [23 May] in the European Parliamentary elections, it’s worth taking a step back from the maelstrom of British politics and reflecting on the debate we’ve been having which has brought us to this strange impasse.

Before the 2016 referendum, one issue dominated our discourse on the EU – immigration. Every issue – housing, jobs, pay, crime – seemed to get sucked down the vortex of immigration, which inevitably led to  questions over whether the EU and freedom of movement for workers across the 28-member state was the root of all our woes.

In one sense it is obvious why this happened – economic crises of the scale of 2008 often lead to hostile reactions to foreign influence, especially towards those at the bottom of the pecking order. Class discrimination was always a strong part of anti-migrant sentiment – no one was bothered about the ‘non-doms’, or foreign premier league footballers, it was the cleaner from Romania or the bricky from Poland who was the problem.

This economic narrative fitted together for many of a certain generation with a sense that culture was changing too fast, in ways that were destabilising. Brought together with the ‘War on Terror’ and rise in anti-Muslim sentiment, it developed into a reactionary story which depicted Johnny Foreigner as the original sin, and the EU as the sinner.

It’s remarkable how that sentiment shifted rapidly post-Leave vote, where suddenly Brexit itself and the debacle of negotiations were sufficient fuel for all the resentment and anger in anti-EU opinion. As we have reported before, immigration dropped like a stone as an issue of political concern amongst the British public, just as concern about ‘Brexit/EU’ rose to the top of the agenda almost overnight. 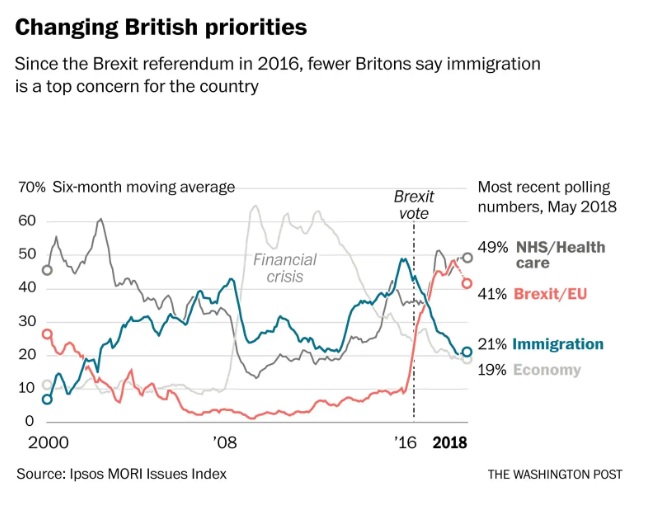 So in the past decade since the 2008 financial crash, the debate around the EU has had two phases: first the immigration phase, second the Brexit negotiations phase. But of course there’s a lot more to the EU than movement of workers and constitutional wrangling. Infact, migration is probably not in the top ten most important issues when it comes to the major challenges we face in the 21st century. On climate change, automation, the global financial system and other fundamental questions, it’s other aspects of the EU, not freedom of movement, that we should be paying attention to.

One of these is the EU’s state aid rules. Name a major challenge facing the planet which won’t involve strategic interventions into the economy by states? The question of how the state acts, and what the rules of engagement are for acting, are two of the major dividing lines in the intellectual history of economics, from Keynesianism which argued for the necessity of state intervention to sustain capitalist order, to socialism which argued for the state to democratically control the resources of the economy and distribute them to meet social need, to neoliberalism which argued for the state to restrict itself to a set of regulatory functions which allow the ‘free market’ to make ‘rational’ economic choices.

It’s the latter of these ideologies which is the basis for the EU’s state aid policy, which urges that “any aid granted by a Member State or through State resources in any form whatsoever which distorts or threatens to distort competition by favouring certain undertakings or the production of certain goods shall, in so far as it affects trade between Member States, be incompatible with the common market.”

Advocates argue that these rules prevent politicians from doing favours for their buddies in the private sector, thus discriminating against other companies, whether they be at home or abroad. ‘Fair’ market competition across the whole of the EU means the most efficient companies do best, making it harder for networks of patronage to emerge between government and captains of industry.

Built in to this idea is that capitalism is inherently fair, efficient and dynamic as long as the state keeps out of the way, but we know from the history of capitalism that that isn’t the case: powerful corporations which have built up resource control over decades and even centuries, including from the plunder of third world countries, are able to use that power to squeeze rivals, opponents and the planet to maximise profit extraction. Land can be bought up not to use productively, but simply to prevent competitors getting hold of it. Companies can be far too concerned with short-term decisions which please shareholders to think about investing in the research and development necessary to advance technologically.

In fact, as Marriana Mazzucato’s the Entrepreneurial State shows, capitalism has relied on the state for its dynamism, because it has the size and longer-term perspective which can allow it to make major technological breakthroughs, like the internet, or almost all the parts which make up the iPhone.

Furthermore, if we look at the economy through the lens of climate change, the idea that the state should not intervene strategically to control and direct key aspects of production and investment is positively deranged. No one serious today thinks that the rapid emissions reductions the world needs over the next decade can plausibly happen if we wait for green capitalism to do its thing.

Looked at in that way, it is a major problem that state aid rules essentially forbid a Green New Deal, which is all about the state intervening selectively in the economy to overhaul infrastructure, make housing and transport energy efficient and so forth.

There are exceptional allowances for the use of state aid, which include “to remedy a serious disturbance in the economy of a Member State”, which was used to bailout the banks in 2008, or “to promote the development of certain economic activities/areas”, but a contentious decision ultimately goes to European courts, which corporations often win and have used to drag out cases for years to delay government action.

There are, therefore, many grey areas when it comes to state aid, and for politicians blaming Brussels’ rules can be a convenient excuse for doing nothing. Thomas Fazi and Bill Mitchell have argued in the book ‘Reclaiming the State’ that part of the reason domestic politicians supported the construction of the EU in its current form was exactly for this purpose: if your hands are tied, you can’t be blamed. Fazi and Mitchell call it “the politics of depoliticisation” – deliberate restriction of the space for democratic action over the economy to suit corporate interests.

Lauren Dingsdale, a prospective Labour candidate in Middlesbrough and former lawyer specialising in European Competition Law, has argued on Twitter that this is exactly what the Tories are up to in the case of British Steel, with Business Secretary Greg Clark repeatedly referring to EU state aid rules to down-play his power over the future of the company.

“My big concern is that the Tory Government and the Tory MP in the area Simon Clarke will simply cite state aid as an easy reason not to intervene,” Dingsdale said.

A BBC ‘Reality Check’ piece on state aid rules and British Steel sheds more light on the specifics, stating that when it comes to the possibility of nationalising the firm, as Labour have argued for: “A government can own a company under state-aid rules – but it is not allowed to keep it going if it would otherwise fail.

“So if a government could convince the European Commission that buying the business would be a sensible move that any investor would make for a profit, it would not be classified as state aid.

“That might have been a difficult argument to make with British Steel.”

Many other EU countries intervene in their own economies to a far greater extent than Britain does but do not always fall foul of state aid rules, finding a way around them. It would be silly to say the Tories have not been more interventionist because of state aid rules – neoliberalism is the ideology of choice for the Conservatives, they don’t need to be cajoled into it.

But for Labour, who say they want to transform the British economy, the fact that state aid rules are not one of their six red lines to support the government’s Brexit Deal shows the extent to which issues like immigration have dominated the thought even of parts of the left in Britain.

The SNP also complain that EU state aid rules hold them back, but the last time they detailed their proposals for EU reform in 2014, state aid rules didn’t get a mention.

That’s directly relevant to the case of Bifab, the energy manufacturing firm in Fife that was mothballed last year before a take-over of the company backed by the Scottish Government kept it alive. The company is still on the verge of closure if no new contracts can be found. There just so happens to be a £2 billion contract in an offshore wind farm site just ten miles off the Fife coast. But French energy giant EDF own the site, and it looks like they are going to give most of the contract to an Indonesian firm rather than Bifab. Nicola Sturgeon has said she will do everything she can to intervene – as long as it’s within the limits of EU state aid rules.

Imagine for a second a different debate since the financial crash in 2008, one where we realised that corporate capitalism could no longer be allowed to own and control the world’s resources, and that people – via governments – must get their hands on the levers of economic power. Housing, jobs, pay, crime – all of the issues that have been looked at through the lens of immigration could have been looked at through a much more accurate, more potent lens of who owns and controls the economy, and in whose interests. That would have led us to a discussion of the EU’s state aid rules, and whether it was necessary to change them, and what was the best political strategy for changing them. It’s not too late to have that debate now.

CommonSpace relies wholly on small, regular donations from you: our readers. Become a donor today to support our work.