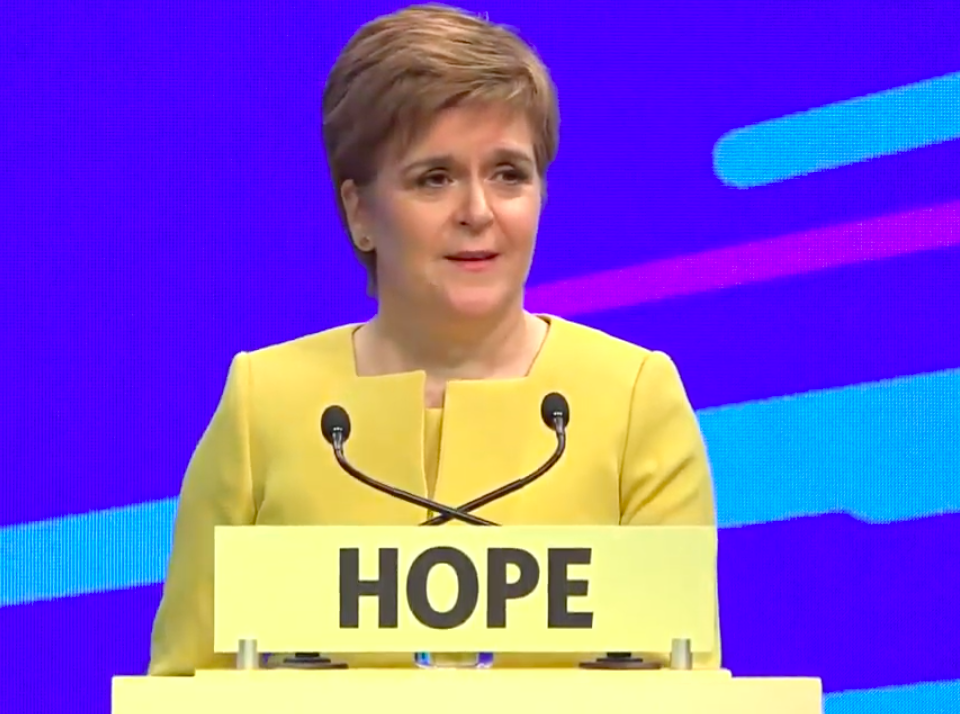 HOW do you address the problem of a Commission that divided your party and damaged your brand? You set up another one.

That appears to be SNP leader Nicola Sturgeon’s answer, after announcing a new Social Justice and Fairness Commission in her speech to the party faithful at spring conference on Sunday, following fast on the trail of the Growth Commission, which was passed on Saturday but only after an amendment was backed by members which turned a report which sought to use Sterling until an independent Scottish Government “chose to do something differently” to one which sought to establish a Scottish currency “as soon as is practicable after independence”.

Sturgeon did not mention the Growth Commission by name in her speech (only referring to “Andrew Wilson’s work”) and made no re-statement of her tweet which followed Saturday’s debate, which implied that the amendment was supportive of the GC report’s controversial ‘six tests’ on setting up a Scottish currency.

The proposers of the amendment have made clear since then that that their amendment was not compatible with the six tests, and Sturgeon was wise to avoid going over that murky territory again, instead seeking to restore independence’s social justice credentials.

READ MORE: Nicola Sturgeon: Legislation for indyref2 will be introduced in May

“The fact is this,” she said. “Independence will mean little if it does not ensure a safe, warm home for everyone to live in, a fair chance for everyone to get on in life, and bring an end to the shameful Westminster system which in 21st century Scotland leaves people without enough money to feed their families at the end of the week.

“We are one of the wealthiest countries in the world. But we will only be a truly rich society when we ensure that not a single man, woman or child has to rely on a food bank to eat. That is the prize of independence.”

The new commission was presented as building on the work of the GC report, attempting to “set out how the proceeds of economic growth in an independent Scotland can be shared much more fairly”, but it almost goes without saying that no clean-cut separation can be made between a government’s economic growth strategy and its approach to social justice and fairness – they are entirely inter-twined.

It is perhaps an acceptance that there is at least a perception that the Growth Commission report is seen as not especially socially just or fair, but if this new commission is to be meaningful it will have to do more than seek to put a social justice gloss on the GC report, and show exactly how they are going to deliver the transformation Sturgeon advocated in her conference speech. That will surely have to eat into some of the GC’s policy terrain, which has already been augmented significantly as it’s made its way through the party. The obvious first test of the new commission will be its remit – will it be given the opportunity to put forward plans on areas as influential to the functionings of a new Scottish state as Wilson’s commission has?

READ MORE: #SNP19 Currency advocates hit out at claim their amendment is compatible with ‘six tests’

We have been here before with anti-poverty commission’s. Naomi Eisenstadt was appointed by Sturgeon as her independent ‘poverty tsar’ in 2015, but after reports making a series of recommendations she left nearly 18 months ago, with an unclear at best legacy of legislative change. Of course there is a difference between a poverty adviser for devolved government and a commission for independence, but deeds will always be a better indication of what a politician is willing to prioritise to make things change than words.

In that vein, there was a welcome and urgently needed policy shift on regulating Airbnbs, while it will be interesting to see what the declaration of a climate emergency will mean practically – it’s difficult to see how it could be credible alongside continued support for new north sea oil & gas explorations.

It will be interesting to see what the summer door-knocking campaign on the economics of independence, which aims to distribute 2.4 million household guides into the hands “of every potential voter”, will prioritise. Sturgeon’s speech suggested it will be focused on the potential of specific Scottish industry sectors like renewable energy and tourism, rather than the macroeconomics of the GC report.

Then Sturgeon added a bit of meat on the bones of her new indyref2 strategy outlined earlier in the week, with legislation to be brought forward in May. The question of a section 30 order – already rejected by the UK Government – is a bridge Sturgeon doesn’t want to try to cross at the moment, but it is not going away.

All in all, her speech was one that appeared to indicate an awareness of the troubles of her own making in the form of the Growth Commission report, and thus sought to re-position her independence vision as one that is about social needs, not fiscal rules. Time will tell if it reflects a genuine awareness that she allowed Wilson to steer the party too far away from social democracy with the GC report, or if it is merely an attempt to put a social democratic window-dressing onto the GC report’s neoliberal architecture for a new Scottish state.