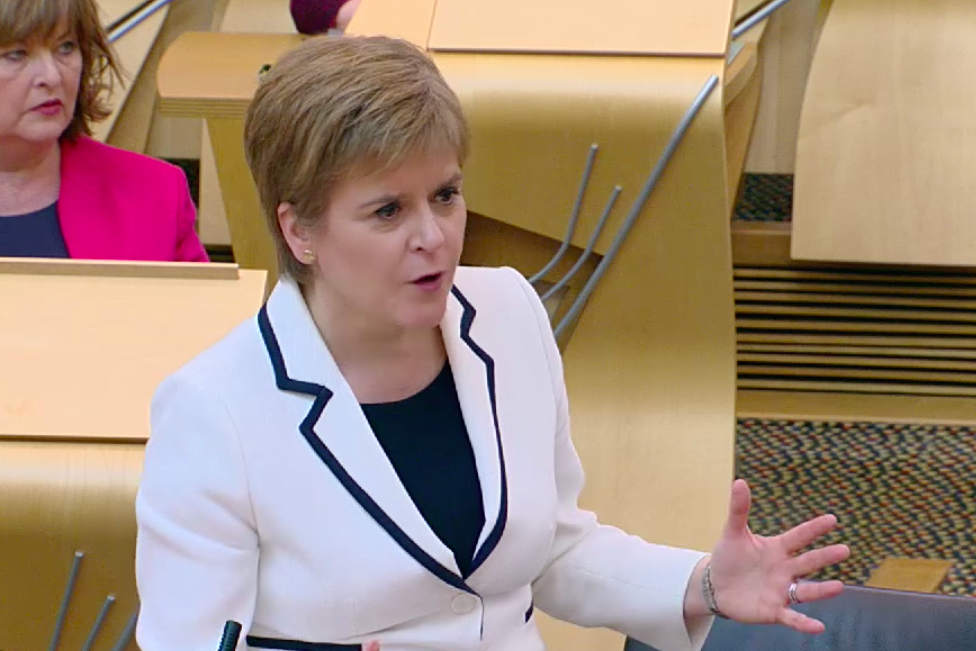 DON’T get too excited. First Minister Nicola Sturgeon’s speech to the Scottish Parliament today stating that she would pursue an independence referendum before the end of this parliamentary term, in 2021, is not the same thing as saying she will definitely hold one. The no small matter of a Section 30 order, which Sturgeon again reiterated that she believed was necessary to have a legally binding referendum like in 2014, is a hurdle that still must be overcome.

The UK Government is currently opposed to granting the Scottish Parliament such an order, and will likely remain opposed at least until a change of government happens. Even then, it would probably require a minority Labour Government relying on SNP votes for a section 30 order to be wrangled out of Westminster before the next Holyrood elections. So a very specific set of political developments is likely needed to get from here to indyref2 after today’s speech, developments which are no means impossible, but are most certainly not inevitable.

The First Minister chose her words carefully when outlining how she would take forward her indyref2 plan. She would not immediately call for a section 30 order, instead she would pursue the legislation for a second independence referendum through the Scottish Parliament, and then only when she thought the time was right for a second referendum would she make the request to the UK Government for the powers to hold the referendum itself.

What this does is prevent Theresa May from quickly rejecting a section 30 order, which would lead to the obvious question to Sturgeon of: ‘what now?’ Instead, she can keep a section 30 order in play by delaying the request until later, and in the meantime argue that the uncertainty over what will happen with the UK Government is legitimate reason to believe a section 30 order could be accepted at a future date, under different circumstances, even if the Tories are implacably opposed now.

That gives Sturgeon breathing room to re-energise her indyref2-hungry party ahead of European Parliamentary elections in May and a divisive currency debate at SNP conference this weekend. It also gives her the space to push the constitutional ball into the unionist court, which is what the second part of today’s announcement was all about.

What this does is it allows Sturgeon to resist the charge that she’s obsessed with an independence referendum by legitimately saying that she is offering unionists to engage in a different constitutional path. Whether that different path could become an alternative path to indyref2 is unclear, but when asked by Tory MSP Miles Briggs whether she was open minded about dropping indyref2 in this parliament, she responded by saying that she was “open minded with no pre-conditions”.

She alluded to her thinking here near the end of her speech, when she said that if unionists did not engage in her offer to seek devolution consensus “support for independence would grow”. Thus, the SNP leader is offering up the carrot of devolution talks with the stick of pursuing indyref2 harder if the opposition don’t bite.

All of this makes sense from the point of view of Sturgeon managing her dual position as leader of a pro-independence party and First Minister of Scotland, but it does raise some strategic questions when looked at solely from the point of view of independence: holding off on pushing for a section 30 order may be politically convenient for the First Minister, but does it actually help build pressure on the UK Government to deliver on it? Waiting until an undefined time gives the SNP leader room for manoeuvre, but there is only two years left now until the end of this parliamentary term – if the latest indyref2 could legitimately be held is about six months before the end of that term, and getting the legislation through Westminster may take another six months, that means there is still only about one year before she has to make the section 30 request anyway. And does it not get easier for a UK Government of whichever stripe to say ‘no, wait until after the next Holyrood elections’ the closer we get to those elections?

These are all questions which are difficult to answer given the many known unknowns of Brexit and the UK Government, but they are legitimate questions nonetheless.

We finally have indyref2 movement – but there’s a long way to go.