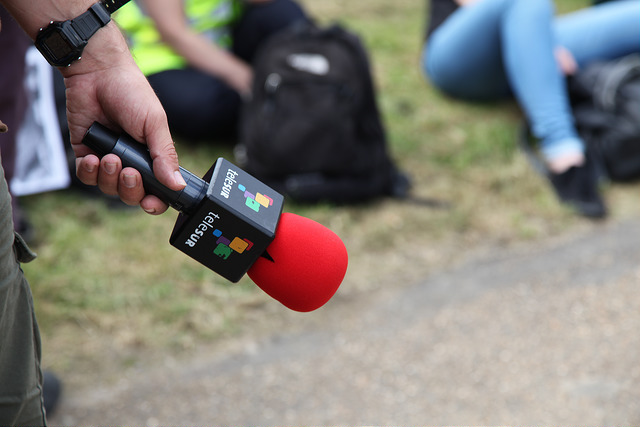 FOR THE SECOND TIME this year, the Facebook page for the news network teleSUR English has been taken down by the social media behemoth’s moderators without specific explanation, drawing further attention to the overwhelming power of the private interests behind dominant online platforms to place limits upon the flow of information.

The advertising-free Latin American news network, funded jointly by the states of Venezuela, Bolivia, Cuba, Uruguay and Nicaragua, reported that its presence on Facebook had been deleted yesterday [14 August], without any specific reason being provided by Facebook’s administrators. The English-language page for teleSUR was previously removed temporarily in January of this year, again without explanation.

“This is an alarming development in light of the recent shutting down of pages that don’t fit a mainstream narrative,” stated Telesur English in a post on their website.

According to teleSUR, their single, cryptic communication with Facebook since the deletion has been a message informing the network that the removal was due to a violation of Facebook’s terms of use, without specifying precisely what violation had taken place. “Continued misuse of Facebook’s features could result in the permanent loss of your account,” warned the ‘Facebook team’.

According to Pablo Vivanco, Telesur’s former director, the network had been “even more careful” with its social media posts since the last time it was vanished by Facebook’s administrators, and claimed to have broken “absolutely none” of Facebook’s terms. In the absence of any official rationale for this act of apparent censorship, concerned onlookers elsewhere in the media – many rallying under the hashtag #BringBankTeleSUREnglish – quickly formed their own suspicions.

In December of 2017, the Intercept reported that Facebook had finally and explicitly admitted to deleting pages at the behest of the United States Government, following their removal of the social media presence of Chechen dictator Ramzan Kadyroy. Speaking to the New York Times, a Facebook representative stated that these accounts were deactivated because Kadyroy “had been added to a United States sanctions list and the company was legally obligated to act.”

Considering that the government of Venezuelan President Nicolas Maduro is also under US sanctions, and coupled with the perennial enmity between the US and Cuba, it appears credible that Facebook’s reasoning for taking down teleSUR English may be rooted in similar politically-motivated diktats from the State Department.

Further evidence for Facebook’s obsequious relationship with Western power came in May, when it was announced that the company was partnering the pro-Nato, Washington DC-based think tank the Atlantic Council, in an effort to combat election-related propaganda and misinformation on social media, following concerns over potential Russian involvement in the 2016 US presidential election.

However, even prior to this, Facebook already had a murky history with state-sanctioned censorship: in 2016, Facebook hired Jordana Cutler, former advisor to Israeli Prime Minister Benjamin Netanyahu, as the company’s head of Policy and Communications for Israel;  this was quickly followed by meetings between Facebook executives and Israeli government officials. It is likely that these meetings were held in response to threats from the Israeli Government that failure by Facebook to voluntarily adhere to Israeli deletion orders would lead to the enactment of laws that would compel the social media giant to do so, or else be heavily fined or potentially blocked within Israel.

In the aftermath of these meetings, many Palestinian groups and activists critical of Israeli policy found themselves removed from Facebook, prompting Israeli justice minister Ayelet Shaked to reportedly boast: “A year ago, Facebook removed 50 percent of content that we requested. Today, Facebook is removing 95 percent of the content we ask them to.”

Critics of teleSUR have often condemned the network as a propaganda outlet for the leftist governments which provide its funding. Yet if the pursuit of ideological agendas at the expense of journalistic integrity is at the root of such criticism, then those concerned should be far more worried about the power of Facebook and the other online platforms which have made themselves so indispensable to today’s struggling media industry.

Commenting in the aftermath of the deletion of the teleSUR English Facebook page, journalist Abby Martin, presenter of the teleSUR show The Empire Files, observed: “Tech companies, working in concert with think tanks stacked with CIA officials and defense contractors, shouldn’t have the power to curate our reality to make those already rendered invisible even more obsolete.

“TeleSUR offers an alternative perspective that challenges US imperialism and gives a platform to leftist, working class voices from Latin America, a region where the US empire wants to reinstate hegemony.”

The iconoclastic Martin is an illustrative example of the difficulty posed by teleSUR to the self-satisfied mindset of the conventional media, chiefly because she has spent a career refusing to live up to its preconceptions. Formerly a presenter for RT’s Breaking the Set, Martin garnered much attention when she condemned Russia’s revanchist 2014 invasion of Crimea live on a Russian-funded broadcaster. She then deeply frustrated much of the Western media by refusing to stick to their expected script, arguing to a baffled and enraged Piers Morgan that he was “beholden to advertisers that [he] cannot criticize” as much as any RT journalist is constrained by the edicts of the Putin regime.

Strangely enough, the Atlanticist commentariat who had injudiciously rushed to embrace Martin as a reborn Cold Warrior went distinctly quiet once they realised her critiques of unjustified military intervention and media self-censorship were not limited by their preferred geopolitical boundaries.

Thus, when she transitioned to teleSUR – on which her new show was allowed a considerably broader editorial scope and provided greater in-depth analysis – she arrived with a well-earned reputation as nobody’s puppet. Other journalists familiar to Western audiences that have produced work for Telesur include Richard Seymour and Tariq Ali – both undoubtedly writers of strong opinions, but who nevertheless could hardly be accused of toeing a party line.

Its defenders would argue that teleSUR, by virtue of being funded by multiple states, strikes a balance between the perspectives of each of them, although it understandably articulates those views these respective nations share; a suspicion of American power, a fierce adherence to anticolonialism and a celebration of revolution throughout the global South. While teleSUR is generally sympathetic to the animating political projects of the governments which fund it, figures such as Noam Chomsky have argued that such an outlook is a necessary corrective to the paucity of balanced coverage they receive elsewhere in the media, large segments of which are openly dedicated to their overthrow, legally or otherwise.

Further complicating the arguments surrounding Facebook’s deletion of teleSUR English are the spurious comparisons some have made with the shutdown of alt right conspiracist crank Alex Jones’ InfoWars platform by several social media sites. This should be addressed only to emphasise the obvious difference between the two cases: teleSUR has never accused the families of dead children of being paid-up crisis actors, nor has it ever speculated about the influence of Satan and his goblin hordes upon our political discourse. As the journalist Adam H. Johnson observed on Twitter: “Banning the former is an ethical and legal no-brainer, attempting to ‘curb’ the latter is a naked power grab by govts and large corps.”

CommonSpace’s David Jamieson correctly argued earlier this month that it is perfectly possible to oppose a spittle-flecked crackpot like Jones and his wilful disregard for every standard of journalism, while simultaneously expressing concern about the largely unaccountable power that social media giants exert over our lives and the media that is permitted to inform them.

Since the rise of Donald Trump, when the nebulous concept of ‘fake news’ became simultaneously a weapon, an insult, a rallying cry and an alleged mortal threat to liberal democracy and journalistic integrity, social media platforms have been under increasing government pressure to curb its spread, even if such questionable material remains ill-defined. That teleSUR English barely fits the ever-shifting criteria of fake news barely matters in this context. What does matter is that the ability of companies like Facebook to approve and veto any and all media at will, with the cooperation of their preferred governments, has now become the norm.

This should worry us, because as Politico’s Jack Schafer observed, “Mark Zuckerberg is no arbiter of truth.”