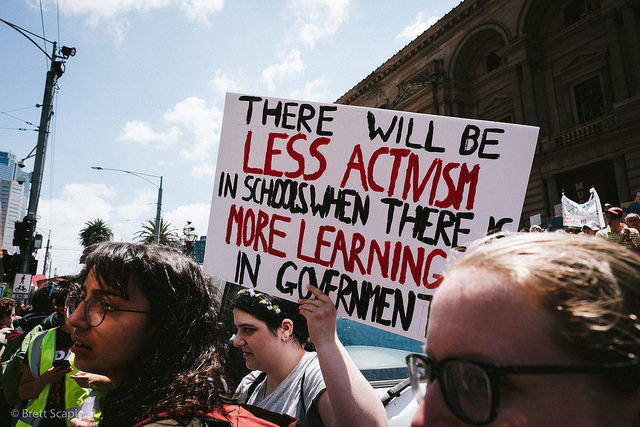 DID I ever tell you kids about the early 2000s?

It was a weird time. Some readers might remember the mass walkouts from British schools organised in protest against the Iraq War in 2003. As simultaneous demonstrations took place around the UK, some 3,000 school pupils brought “chaos”, as the Scotsman newspaper breathlessly put it, to Edinburgh’s city centre – meaning, in practice, that traffic was disrupted for about an hour.

Once the streets of Scotland’s capital were safe once more from adolescent anarchy, subsequent press coverage would posit that the young people involved cared little for the nuances of geopolitics or anti-imperialism, and had either been tempted by the opportunity to bunk off school, or – my favourite – had been brainwashed by Tommy Sheridan, a theory which in retrospect gives rather too much credit to the former SSP leader’s powers of persuasion.

Those who participated in last week’s ‘Youth Strike 4 Climate’ may find such condescending appraisals familiar from some of the media reaction to their own expressions of non-violent civil disobedience in Glasgow, Ullapool, Fort William and Forres. The right-wing Spectator magazine – always in favour of telling young people what they can and cannot do, usually in the name of intellectual freedom – ran no less than three screeds of outrage on the strike, each more swivel-eyed than the last.

Ross Clark wheeled out a variation of the 2003 ‘brainwashing’ analysis, arguing that teenage climate activists had been “traumatised” by a relentless stream of apocalyptic climate change propaganda. To back up this scrupulous psychological diagnosis, Clark recalled a scary film he watched as a child, before deciding that a “balanced education” – presumably one which includes some exhaustively discredited bunk science – might have saved impressionable young minds from the fear of a “slightly warmer world.”

Next came a contribution from Toby Young, a failed entertainment journalist who woke up one morning and decided he was an expert in education policy. Tragically, no one corrected him.

Young apparently believes that a single unexpected day of missed classes is enough to bring the entire curriculum to its knees, which might help explain why his tenure as CEO of the West London Free School was so mercifully brief. In this vein, Young goes on to wonder why the strike was not scheduled for the weekend, so as to avoid the education ruination brought about by a day off.

If for nothing else, Young can be forgiven for his ignorance on the finer points of political activism – though lack of expertise has never noticeably slowed him down before – but it is generally preferred that protests are executed in order to have the maximum impact. The idea of holding a demonstration that will cause no disruption and attract little attention kind of misses the point.

Finally, the Spectator’s hat-trick of priggish condemnation was completed by the Scottish commentator Stephen Daisley, who argued that those school pupils participating in the Climate Strike should be “promptly suspended” in punishment for their truancy.

This possibility has been floated elsewhere, and has already experienced blowback – the Scottish Greens have urged schools to hold back on exacting disciplinary measures against those who participated in the strike, which Ross Greer characterised as fully in keeping with the Curriculum for Excellence’s goal of turning young people into responsible citizens.

Unsurprisingly, Greer’s opinions carry little weight with the Spectator crowd, hence their evident desire to witness punishment, their lust for teenage suffering, and their disgust for educational authorities which seemingly had neither the inclination nor the will to dole it out.

However, events on the scale of the Climate Strike pose a challenge for those who prefer not to spare the rod. School discipline often functions only through isolating offenders; if the recommendations of the UK’s armchair disciplinarians were to be followed, the weakness of that system would be exposed.

Teachers – and nobody knows this better than they – are few, and their students are many. Precisely what happens when hundreds or thousands of pupils are suspended simultaneously? What would it look like if the roughly 75,000 young people across Europe who took part in last week’s strike were placed in detention? One hopes they brought enough chairs.

Children and teenagers spend much of their time, perhaps grudgingly, under the authority of their teachers and the educational institutions they attend. That authority relies on a social contract of sorts; young people may be officially powerless, but the power that compels them is often far more fragile than it might appear.

Here is the first lesson the Climate Strike has taught a new generation of activists: if there’s enough of you, they can’t touch you. As an act of political self-defence, mass-mobilisations work. Some may prefer that lesson went unlearnt, but that’s their problem.

Daisley argues that children cannot expect special treatment. Put aside, for the moment, that vast swathes of law have been written outlining in very clear terms why children can, should and do expect special treatment; Daisley’s argument is predicated on the idea that, if these young strikers wish to be taken seriously, they must also expect to be treated the same as any other group engaging in political protest.

Except, of course, they are not the same. That the strike required so-called ‘truancy’ at all is evidence that the young do not enjoy the same rights and privileges as their elders.

A conventional strike would be impossible, as those younger than university age have no trade union to represent them. They do not enjoy the relatively few legal protections for industrial action that exist under post-Thatcherite UK labour laws. There is no universally accepted scenario under which school pupils can down tools (or rather, textbooks). The injustice of that – particularly when the young are just as vulnerable, or more, as any other demographic in society – is something that should be revisited.

In the meantime, a more immediate lesson can be learned. It is entirely possible that most of the strikers are not regular readers of the Spectator – as I understand it, teenagers generally have better things to do with their time – but if they were to glance across the apoplexy that greeted their orderly, civil and well-coordinated protest, it will be hard to avoid the impression that this is what awaits all who take part in such actions.

The young will not need the unfairness of their situation explained to them, but others may require reminding: take to the streets and make your voice heard, and you will be called disobedient truants, brainwashed dopes and irrational, unrealistic dreamers whose views should stay in school – even if, as in the case of the Parkland survivors behind the #NeverAgain movement, that is where they faced death.

Take no such action, and you – along with, more often than not, your entire generation – will be dismissed as politically unengaged, apathetic, and therefore undeserving of greater political representation or, in case anyone asks, the right to vote.

However, in a discourse where they can expect to be damned no matter what they do, the young do have one advantage. To take a recent example, the seven MPs in search of a principle who yesterday announced their independence – from both the Labour Party and political reality – care far more about the opinions of the commentariat than any of the Climate Strikers; they have to. Bereft of a significant political constituency or a cast-iron cause, they have no other choice. The young activists who attracted so much attention last week, on the other hand, can afford not to care what ageing columnists think.

There’s a freedom in that, and power too. So if they take one bit of advice from a media establishment they have largely outgrown, I would humbly suggest it be this: while they learn to use that power, they should also learn to enjoy it. You’re only young once, after all.