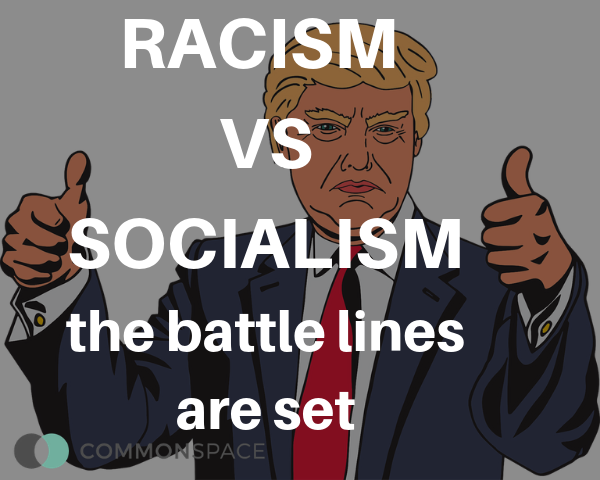 US President Donald Trump kicked-off his re-election campaign on 14 July by denouncing four Democratic politicians who he said should “go back” to their own countries.

The four Congresswomen, Ayanna Pressley, Ilhan Omar, Alexandria Ocasio-Cortez and Rashida Tlaib, are all US citizens and members of US minority communities.

They are also broadly identified with the left of the party, described collectively as ‘the squad’ for their left-wing interventions into public debate. Ocasio-Cortez in particular has become the spokesperson of the US radical left in high politics, second perhaps only to US Democratic Presidential nomination hopeful Bernie Sanders.

Trump’s messaging, not ‘dog-whistling’ so much as open racial animus, must have been well received by his base, because he escalated his rhetoric again the next day.

He tweeted: “We will never be a Socialist or Communist Country. IF YOU ARE NOT HAPPY HERE, YOU CAN LEAVE!”

Trump went on to say repeatedly that they were “anti-Israel” and “pro-Al Qaeda” and implied they were suspicious in their sympathies over the 9/11 attacks.

What we are witnessing is a re-division in US politics, explicitly associating racial ‘undesirables’ and demands for social and economic change.

Trump hasn’t invented this. Throughout the last two hundred years from Europe to the US, working class attempts at economic reform have been dismissed as the work of foreigners, Jews, and other supposed racial inferiors.

In this sense Trump has identified a synthesis that few in the establishment of the Democratic party or on the right of Labour would dare admit – throughout the modern era, the fight against racial inequality and for a wider social and economic transformation have been indivisible.

The US Civil War, which ended in the formal abolition of slavery, was in part started by an alliance between radical abolitionists and slaves. The dividing lines of twentieth century European politics were forged during the Dreyfus Affair in France, with the radical left rallying against state and elite antisemitism. Genocidal antisemitism was smashed during the Russian Civil War, by the working class and socialist movement. From the US civil rights movement to the struggle against the National Front, members of oppressed communities and the radical left again formed effective alliances.

It is this same commitment to anti-racism that ties the radical left to the cause of Palestinian freedom.

The re-division leaves Labour and Democrat ‘centrists’ on the fence

The idea that these forces can be decoupled is false. A view, mainly held in parts of the European centre left, may hold that it can appeal to a mythical, specifically ‘white working class’ through the socially conservative chest-puffing or some salutary anti-immigration policy positioning or rhetoric. All this is likely to achieve is the re-enforcement of the legitimacy being attained by the far right.

Meanwhile most ‘centrists’ – really those on the right of parties like Labour and the Democracts, and in the ranks of media that share their ideological outlook – frantically attempt to decouple the issue of racial oppression from wider political orientation.

Their cottage theory, that racism is a free-wheeling ideological force as likely to infect the left of public opinion as the right, arms those on the far right who are desperate to normalise racism and to weaponise it to increase their influence and scatter any progressive alternative.

Ultimately, many who adopt this stance – especially those who share a class position with Trump or Johnson – will view developments on the left as more threatening than those to their right. Others, who simply accepted that the Clintonite style ‘resistance’ was the natural alternative to Trumpism, but who are now faced with a choice between radicalism or the Democratic and media establishment, will break left.

This sharp redefinition of politics creates opportunities for an insurgent left, if it is successfully harnessed.

The four congresswomen have been placed in prime political position. And not just by Trump and his attacks. ‘The Squad’ are also the target of attacks from the Democratic party establishment, not least Nancy Pelosi, speaker of the House of Representative and guardian of the party’s ‘sensible’ flame.

She has clashed repeatedly with the faction over their refusal to back Democratic manoeuvres which they see as overly compliant with Trump’s policies. She has chided their social movement backers as “twitter world” and poured cold water on ideas for structural reform of the US economy.

A far-sighted strategy would see the four re-imagine themselves as an alternative leadership, engaging not just ‘high-political’ but mass movement politics. Certainly, the right of the Democratic party show no sign of being able to undercut Trump’s own base in the way Sanders’ campaign has.

But nor should they depart from race as an issue. It is deeply structural in a country whose turbulent history has been in large part defined by struggles for racial emancipation. Instead, embracing Trump’s framing of an alliance of socialism and racial equality would speak to many millions across a deeply broken and alienated society.