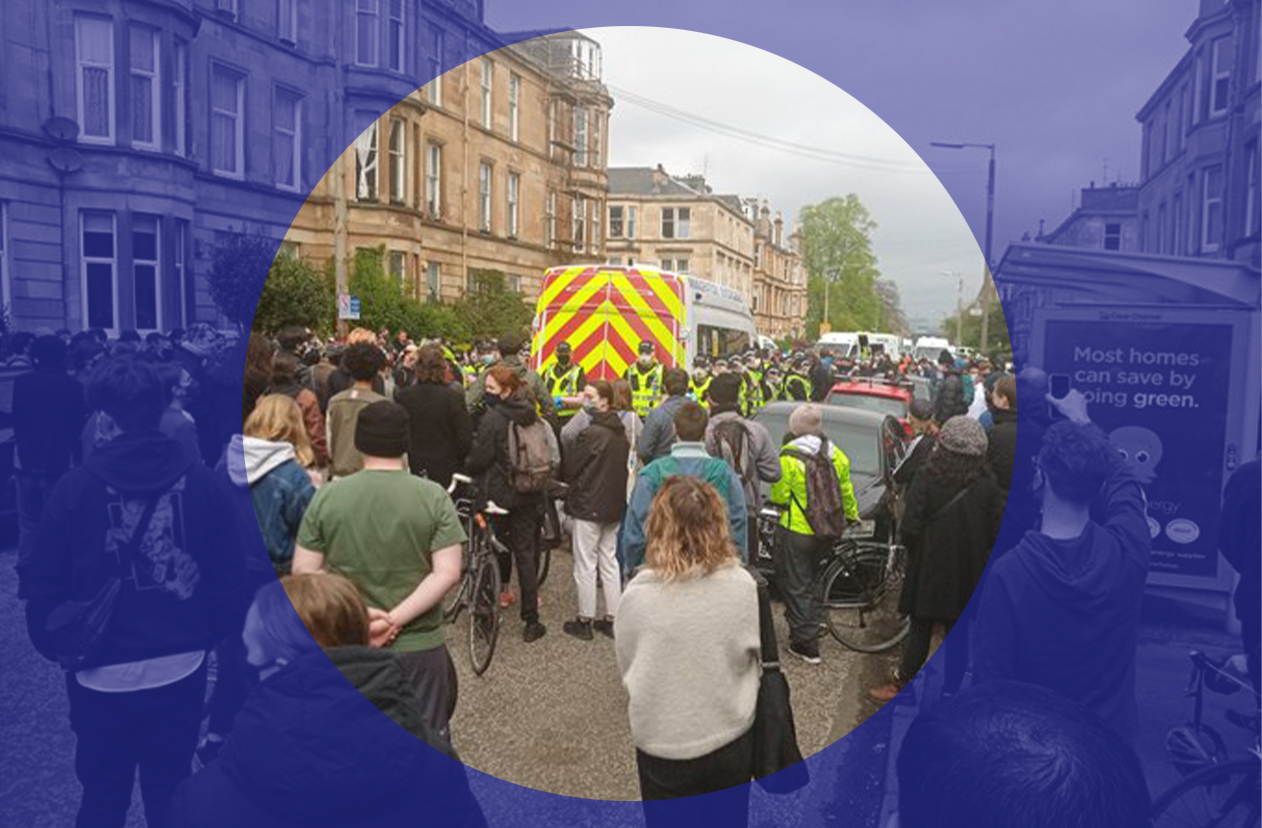 “This is only the beginning of what could prove an explosive few years. That’s the message from Kenmure Street.”

“WE ARE civilised people. Go back to your police stations in peace”.

This was the plea of one local resident over a megaphone to dozens of police surrounding a van in Kenmure Street, Glasgow. The van contained two of his neighbours, picked up the morning of 13 May, the second day of the Muslim holy time of Eid al-Fitr.

At lightning speed, suggesting a very high degree of organisation on behalf of anti-eviction and tenants groups in the city, the van was surrounded by protestors who refused to allow it to leave. Within hours, several hundred local residents and supporters were swarming over Kenmure Street in the Pollokshields area, creating a stand-off with an escalating Police Scotland force, who rapidly assembled to deal with the protestors.

As chants of “these are our neighbours, let them go” echoed up and down the street, residents appeared at their windows and doors to join in. For several hours, officers stood in silence or instigated the sporadic shoving and jostling of peaceful protestors.

Scottish Justice Secretary Humza Yousaf today criticised ”this UK Border Force Operation, in Polloksheilds, the heart of the Muslim community, on Eid” as “a demonstration of the UK Govt’s hostile environment.”

This is not wrong. What he forgot to mention was that the vast majority of officers present were from Police Scotland, and that it would clearly have been impossible without their support. In other words, the ‘Hostile Environment’ policy, organised chiefly by UK Home Secretary Priti Patel, can only operate in Scotland with the cooperation of devolved institutions – chiefly, the Scottish Government’s tailormade national police force.

Police Scotland confirmed their attendance with a short statement: “Around 9.55 am this morning, Thursday, 13 May, 2021, police were called to an address in Kenmure Street, Pollokshields, following a protest by a large group of people.”

Why such a provocative act in the Muslim community on Eid – is it ignorance, or a direct attempt to humiliate or insult? The truth is probably that border police often launch their operations to coincide with family festivals or even weddings or birthdays, because the are more likely to know the whereabouts of various members of the community at this time.

In any event, it represents an astonishingly brazen act – an attack on the heart of Scotland’s Muslim community during Eid, as violence escalates against Gaza in Palestine. Indeed, many people at the protest were organically drawing the issues together; a Palestine flag appeared, and one local Muslim resident used a megaphone to call on his community to set aside Eid celebrations until the standoff was over.

To wild applause he said: “The British state tell people from Afghanistan, Syria and Iraq to ‘go back home’. You have destroyed our homes.”

One of the local community organisers then pledged to resist every eviction, indicating an awareness that this is only the start.

The UK Government Queen’s Speech (Tuesday 11 May) unveiled a range of measures to simultaneously crack down on protest and enhance Theresa May’s infamous Hostile Environment policy. This is what draws together announced plans to introduce voter ID (despite a tiny degree of voter fraud in the UK’s well-established electoral system), ban public sector bodies from engaging in Boycott, Divestment and Sanctions (BDS) of foreign powers (principally Israel), increase crackdowns on protest rights, and ramp up deportations.

The Tories, having strengthened their electoral position profoundly in recent years, are not resting on their laurels. They are determined to repress objectors and dissident elements, all while presenting themselves as the defenders of British patriotism.

What they fear is what they have always feared: that no matter how becalmed opponents appear now, there could be some future convergence between dissenting elements. We are, after all, about to enter years of aggressive social and economic restructuring and turmoil in the aftermath of the pandemic and its economic fallout.

This convergence was already apparent in Kenmure Street, with opposition to the Hostile Environment mingling freely with ideas about foreign policy, a new suspicion about the police, and concerns about the housing crisis. As the protest wore on, trade unionists began arriving with their banners.

The Scottish Trade Union congress released the following statement: “The scenes unfolding at Kenmure Street are nothing short of disgraceful. The forced eviction and detainment of asylum seekers, on Eid of all days, shows the contempt and cruelty levelled by the UK Government to those seeking asylum.

“The STUC applauds all who went out today to support their neighbours and resist immigration raids and deportations.”

Meanwhile, the Home Office fell quiet. Immigration minister Kevin Foster abandoned a scheduled interview. The Home Office refused to answer calls for talks from the Scottish Government, according to Yousaf. He is in a tight spot as well, since this new campaign of evictions will likely see him caught between the British state and public opinion time and again.

This is only the beginning of what could prove an explosive few years. That’s the message from Kenmure Street.

UPDATE: It has now been confirmed that the two men in question have been released.

A statement from Police Scotland said: “In order to protect the safety, public health and well-being of all people involved in the detention and subsequent protest in Kenmure Street, Pollokshields, today, Chief Superintendent Mark Sutherland, has, following a suitable risk assessment, taken the operational decision to release the men detained by UK Immigraton Enforcement back into their community meantime.”

Writing on Twitter shortly after, First Minister Nicola Sturgeon commented: “Today’s events were entirely down to @ukhomeoffice actions. @policescotland were in an invidious position – they do not assist in the removal of asylum seekers but do have a duty to protect public safety. They act independently of ministers, but I support this decision

“Both as MSP and as FM, I will be demanding assurances from the UK government that they will never again create, through their actions, such a dangerous situation. No assurances were given – and frankly no empathy shown – when I managed to speak to a junior minister earlier”.

Following their release, the two detainees were marched to the local mosque in triumph, surrounding by a crowd of supporters.