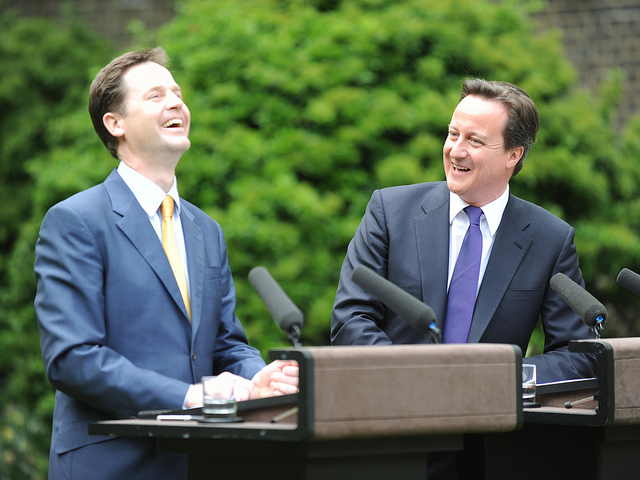 CommonSpace editor Ben Wray finds that the pro-austerity, anti-public ownership and anti-grassroots democracy messages coming from the Independent Group indicate a set of politicians united by a pining for 2010

THE Independent Group’s policy platform appears to be taking shape.

As the three former Tory MPs joined the eight ex Labour MPs in joining the new group on Wednesday [20 February], Anna Soubry was asked about her time as former Business Minister in the Coalition and Cameron Government, where she oversaw the longest wage decline in living memory and the rise of food banks in every town and city in the UK.

“I believe we did the right thing in the Coalition government in particular,” Soubry said.

“I have to say I think the things we did to the economy were absolutely necessary at the time.

“I think the Coalition government which I served in did a marvellous job.”

So that’s that then. It took two days for the Independent Group to become the authentic voice of David Cameron and George Osborne circa 2010. Theresa May may well be upholding the age of austerity the two Bullingdon boys begun, but she is decent enough to be embarrassed about it – Soubry is still proud of what just about every economist in the world knows was the wrong economic policy at the wrong time.

Two days before, shortly after announcing their split from Labour, Chris Leslie, who was briefly shadow Chancellor before Corbyn’s leadership victory in 2015, spoke to the New Statesman, and explained why he opposed his former party’s policy of bringing utilities like energy, mail and the railways back into public ownership.

Leslie said: “It speaks to the controlling instinct of the hard left because there is a sort of view that John McDonnell sitting in the Treasury can mandate how many tractors are sold, or what trains should leave Euston at what particular time of day, or what should be the price of a stamp. The problem with the Marxist ideology is that it assumes this omniscience on behalf of the central controller.”

What? John McDonnell wants to dictate train times from the Treasury because of his Marxist ideology? I wasn’t aware that before the Tories privatised Royal Mail in 2013, George Osborne was sitting in Number 11 Downing Street setting the price of second class stamps. And who said anything about tractors?

“Perhaps most insidious was Leslie’s views on grassroots politics, arguing that MPs should decide who the party leader was, not members.”

Leslie’s flippant attempt to equate modest social democracy with stalinist collectivisation was followed up by opposition to a 50 per cent top rate of income tax rate and abolishing student tuition fees, saying “who’s going to pay for it?” The Scottish Government just about manages Chris, despite being 10 years into the age of austerity.

Perhaps most insidious was Leslie’s views on grassroots politics, arguing that MPs should decide who the party leader was, not members.

“Everybody has genuflected to membership,” Leslie said, speaking like someone who has both been in the Westminster bubble since he was 24 and had a vote of no confidence against him by his local party branch.

So what can we gather so far about the Independent Group, and it’s bold (and boring) slogan ‘Change Politics’? Pro-austerity, anti-public ownership, anti-taxing the rich, pro-tuition fees, and against grassroots democracy and mass party memberships. Funnily enough, the change in politics looks an awful lot like what politics used to be like before the 2014 independence referendum, before Corbyn’s election as Labour leader and before Brexit.

READ MORE: Analysis: Why the EU has become the dividing line of Tory politics – even if it costs them the union

That gets to the heart of what unites Soubry and Leslie – they both remember a time when politics was a game solely played by elites, and that just so happens to be a tie when both MPs had much more power than they do now.

The Independent Group does not, at least yet, stand for any change – it stands for politics going back to the good old days when everyone bought into Osborne’s rubbish about maxing out the credit card, Labour still thought Blairite triangulation politics was how to beat the Tories and no one really got angry about the disaster of neoliberal capitalism. Even – god help us – when people agreed with Nick Clegg.

This isn’t changing politics – this is an attempt to turn back time. But history moves forwards, not backwards – consequently, it will almost certainly leave the Independent Group behind.