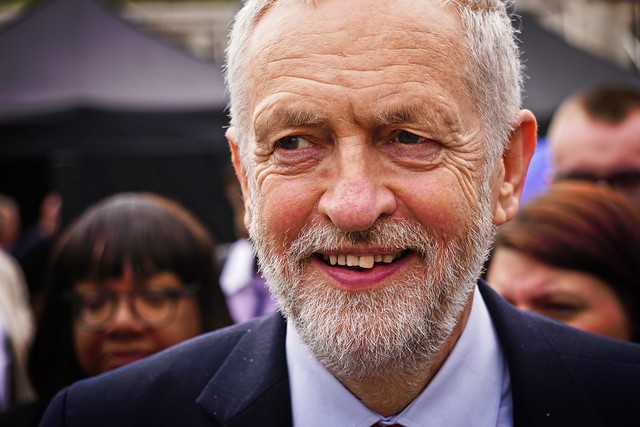 The right to hold indyref2 is now a key dividing line in the fight for control of the Labour party – the independence movement should not be ambivalent about its outcome, Ben Wray finds

SCOTTISH LABOUR has been reeling after shadow Chancellor John McDonnell’s Edinburgh Fringe intervention last week, where he said the Scottish Parliament should decide on whether Scotland has an independence referendum.

That perfectly reasonable position led to a meltdown, where the party north of the border appeared to be divided three ways – for the Corbyn/McDonnell position, against, and leader Richard Leonard paralysed in the middle.

After a meeting on Monday, reports suggest the MSPs appear to have, on the whole, settled into a firm opposition to the UK Labour leadership stance, with Leonard – elected as leader on a Corbynite ticket – apparently toeing the line that Scottish Labour oppose the Scottish Parliament deciding on indyref2. The MSPs are now set to invite Corbyn and McDonnell to Scotland to reassert the Scottish party’s autonomy.

The leadership duo may well respond something along the lines of: ‘Fine, but it’s the UK Government which decides whether to accept a request for a Section 30 order from the Scottish Parliament, and when we are in power that will be our decision.’

Of course, that is not a position which the UK party’s deputy leader Tom Watson would countenance. In a video on the subject over the weekend, Watson backed Leonard over McDonnell, opposing a second independence referendum, while avoiding the actual issue of debate – which is who has the right to decide on holding a referendum – opting for well-rehearsed platitudes instead.

Watson’s intervention revealed how the right to indyref2 question in Labour is now intractable from the wider left-right divide that sees Corbyn and his deputy regularly at odds with one another in a battle for control of the party. While there is a temptation for independence supporters to stand back and take glee in a divided Labour party, it should now be obvious that the Yes movement very much has an interest in the outcome of this battle. If Scottish Labour and the PLP oust Corbyn and McDonnell or neuter their leadership on the indyref2 question, the prospects for a second independence referendum look very dim indeed.

Such a statement may be surprising to those who take The Guardian’s now regular ‘the end of the union is nigh’ pronouncements seriously, but there is an obvious contradiction in the thinking of the guardianistas – while their liberal alarm bells are ringing off the hook about a Boris Johnson government descending into authoritarianism over Brexit, they conveniently cannot see that the same Johnson can deal with indyref2 demands the same way as her predecessor did: by just saying ‘No’.

Opinion polls can build pressure for indyref2, but they can’t actually deliver it. Nicola Sturgeon has all but ruled out any other approach than seeking the UK Government’s consent to hold a legally binding independence referendum, so she is reliant on a new version of the 2012 Edinburgh Agreement emerging. How likely is that?

Britain is a vastly different place from 2012. Cameron only agreed to hold a referendum then because he was convinced it was the best route to exposing and defeating Scottish nationalism. When the Edinburgh Agreement was signed, Yes was on just 28 per cent in polls. No Tory Prime Minister will ever be so naive again, especially not one in the Brexit era when the UK is already in the midst of an existential constitutional crisis.

And let’s remember, a section 30 order was already requested by the Scottish Parliament in April 2017 and was instantly rebuffed by Theresa May (“now is not the time”). Leaks from a ‘union cabinet’ in the dying days of Theresa May’s government last month was revealing as to the attitude of ministers. They were already looking past Sturgeon’s present challenge to the 2021 Holyrood elections, while one Minister feared that a future minority Corbyn government could acquiesce to demands for indyref2 in exchange for supporting a Labour government in power. It was taken for granted by the Cabinet that the Tories would continue to reject any requests from Edinburgh for indyref powers.

Nothing has changed under Johnson’s regime in that respect, or is likely to. And the Leonard and Tom Watson position is that a future Labour Government should turn down an indyref2 request regardless of the result in the 2021 Scottish elections. The reality is that Sturgeon’s indyref strategy onlu looks like having a chance of succeeding with specifically a Jeremy Corbyn Labour government at Westminster.

McDonnell’s intervention has widely been interpreted as opening the door to a Labour-SNP pact, with an Autumn general election now a real possibility. Sturgeon indicated in a column in the Sunday Mail on Sunday [11 August] that she was open to such an agreement, describing McDonnell’s position as a “refreshing change” and speaking of “the opportunity to play our part in locking this right-wing Tory party out of government”.

READ MORE: Analysis: ‘Union Cabinet’ shows the British state at its most desperate

Such sentiment is refreshing from the First Minister, who has at times appeared much more interested in cultivating allies in the People’s Vote alliance who are steadfastly opposed to allowing a second independence referendum to happen than Corbyn and McDonnell. Indeed, it was only one week when Sturgeon told the Guardian that Corbyn “will bear almost as much responsibility as Theresa May or Boris Johnson” for No Deal if it happens.

It would be interesting to know from Sturgeon what her first question would be for Corbyn as PM over a confidence-and-supply arrangement negotiations: would it be about a section 30 order for indyref2, or would it be about his Brexit strategy? Surely it would be the former, but with the first minister – who said yesterday that she’d happily work with an all-women anti-Brexit emergency cabinet, including Tory MPs, floated by the Greens’ Caroline Lucas – that is not clear.

It’s understandable for Sturgeon and the independence movement not to be too favourable to Corbyn’s leadership (or any leadership) of the unionist Labour party, but it would be utterly naive not to realise that there is no outcome of a General Election that would be more favourable for delivering indyref2 than Corbyn at number 10. When it comes to British prime ministers, the independence movement needs to get their heads around the fact that Corbyn is by some distance the best they are going to get.