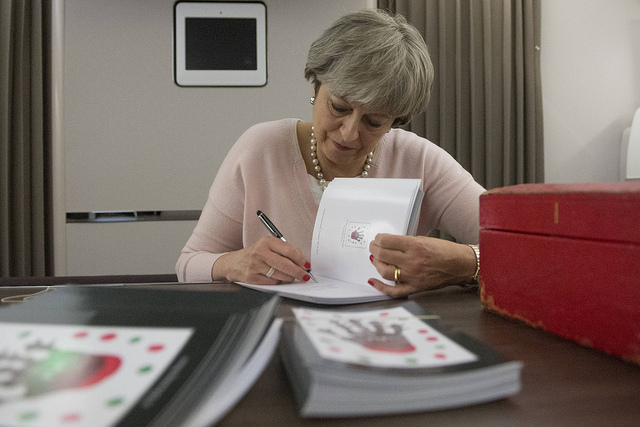 CommonSpace editor Ben Wray finds that the last few days at Westminster provide undeniable evidence that May is engaged in a massive No Deal sham – but have Labour MP’s noticed?

THE first few days back following the Christmas holidays has been clarifying as to where we are at in the Brexit process. So clarifying, in fact, that we really should start narrowing down our ‘what if?’ questions when it comes to analysing the political possibilities going forward.

Political is the key word here. There is so much chatter about the technicalities of the Brexit process – the deadlines, the parliamentary rules and procedures, etc – but all of that misses the fact that politics has primacy here: all rules can be re-written, all deadlines changed, if the powerful will it to be so.

So when it comes to the possibilities of No Deal, the only important question is what are the political interests and balance of forces?

Any serious analysis of UK politics would come to the obvious conclusion that the prime minister is engaged in a massive charade – No Deal is not politically possible and won’t happen.

READ MORE – Analysis: May survives – 3 things to look out for now

On Tuesday we saw Yvette Cooper MP’s amendment to prevent No Deal Brexit passed by the House of Commons. While the motion’s power is not all that significant, it showed clearly that there is an anti-No Deal majority in the House of Commons. This is crucial. Parliament can’t currently agree on anything except that they don’t want No Deal.

It has been argued that a parliamentary majority against No Deal doesn’t automatically mean No Deal will be avoided as the government, not parliament, controls the business of the House, and current legislation means that if nothing happens then on 29 March No Deal will happen. While technically all this is true, it is going to be next to impossible for the government to resist parliament’s political will, and as we saw on Wednesday, the actions of the Speaker, John Bercow, is increasingly empowering parliament to control House business, with the UK Government forced to come back to the House just three days after the inevitable failure of the meaningful vote on May’s deal next week, to prevent the prime minister running down the clock.

So parliament doesn’t want No Deal, the institutions of parliament are operating against No Deal; what about the government? The Business Secretary Greg Clark has today written in Politico arguing that “we can’t go on like this”, stating No Deal needs to be ruled out by the end of the month at the latest to prevent global investors from pulling billions out of the UK.

“In recent weeks, confidence from investors has been shaken,” Clark writes. “Debates in the UK Parliament are monitored closely, and with mounting alarm, in boardrooms around the world. The dire prospect that we could tolerate trading with our largest and closest market on WTO terms – the most rudimentary that exist between any nations on earth – is bewildering to them. And when hundreds of millions of pounds are having to be diverted by companies from productive investments into defending themselves against the risk of a no-deal exit from the European Union – through piling up stocks, reinventing warehouses and planning shutdowns of production – investors have every right to object.”

Clark is not being helpful to the prime minister here, but let’s be clear – he is no lone wolf in the Cabinet. The majority of the Cabinet voted Remain. So did the prime minister. These people are class warriors for British capitalism, and as such they are pragmatic and attentive to their interests. They are a world away from the ideological imaginary of Jacob Rees-Mogg and co, the hard-right Brexiteers who have already lost when they tried and failed to oust May in December.

So if all the institutions of the British political establishment are going to resist No Deal, the only way it could possibly happen is if that same establishment couldn’t find a way of agreeing on how to stop it from happening. The government is (at least for the moment) not going to go for a second referendum, but it could seek to extend article 50. May has hinted at this, and there has been rumours that tentative discussions have started between UK and EU officials on that.

READ MORE – Analysis: Roar of the feeble lion – why the Tory Right are going nowhere

Every EU state would have to agree to such an extension, but the EU Commission has indicated in the past it would be open to such an extension as long as there was a clear purpose behind it, and for a number of very good reasons. The EU doesn’t benefit from No Deal, neither economically or politically – as we’ve argued on CommonSpace previously, if Britain is to leave the EU, Brussels wants to keep it as locked into the EU’s orbit as it can. Extending Article 50 is another indication to the rest of Europe of just how difficult it is to leave the institution, and so not to even think about trying. And of course an article 50 extension opens up the possibility of Britons just getting fed up with the whole thing and moving towards a Remain position.

So whichever way one looks at it politically, No Deal is not going to happen. If that is accepted, it has major political implications. May is banking on the possibility of No Deal to instil sufficient fear into MPs to get them to vote for her deal.

This includes Labour backbench MPs. The Prime Minister wants to play a game of chicken with them by running down the clock, watching UK stock markets plunge and engaging in lorry exercises and other pantomime No Deal preparation activities. But the events of the last few days should have shown that this is all a ridiculous farce and shouldn’t be taken seriously by any MP. It’s understandable that MPs want to look like they are acting responsibly and being the grown-up, but there’s nothing grown-up about watching a fictional drama with a ridiculous, unrealistic plot line and believing it to be real life. Any Labour MP that indulges the charade will just become another character in May’s ludicrous bid to hold onto power. Surely they realise that by now?