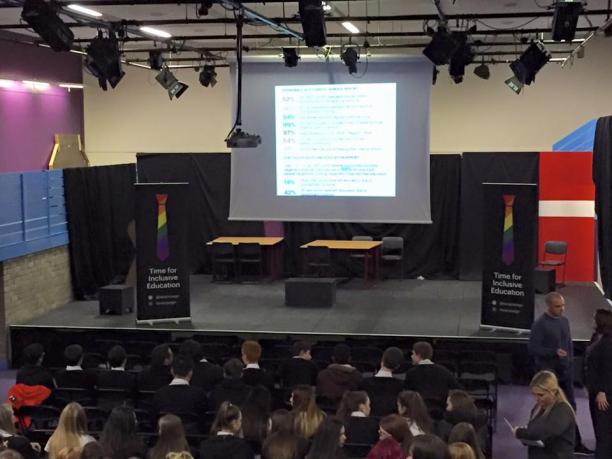 THE Time for Inclusive Education (Tie) Campaign reaches its greatest milestone today (8 November), with the announcement by Education Minister John Swinney of a new approach to tackling the bullying and exclusion of LGBTI students at school level.

But how did this campaign get here? What are the dynamics and practices of the Tie Campaign? CommonSpace takes a look.

Liam Stevenson and Jordan Daly met each other through the independence referendum, organising Yes meetings together. During the campaign, Daly, a recently graduated school student, confided his inability to come out during his school years due to the pervasive atmosphere of homophobia.

This effect of political radicalisation is well documented in social movement literature, with the bounds of, say, a constitutional debate breaking down and a whole range of social issues being addressed anew.

This can be both a deeply personal and intensely public experience, with issues kept covered by stigma for so long suddenly besieged by the mass enthusiasm for social change.

Off the back of Daly’s experiences and the politicised mood of the referendum era, the pair organised a petition to the Scottish Parliament calling for measures to make school level education inclusive for LGBTI students, by tackling endemic bullying and isolation, and educating young people about the unaddressed spectrum of sexualities and gender identities that exist in society.

Although the initial petition was thrown out on a technicality, the campaign was now in motion. How campaigns respond to initial obstacles make or break them.

What would follow over the coming months was the campaign’s crucial period of diversification in three directions.

But just as importantly his promoted the stories and voices of young people who approached the campaign. Many of these were included in its lobbying materials sent to elected representatives and around the country, the moral urgency of which were difficult to ignore.

In addition, it began the work of spreading its message to young people, assembly hall by assembly hall in schools across the country.

Second, TIE began to create an eventually vast network of civil society connections. These would include LGBTI and other equalities groups and campaigns, celebrities, student and youth organisations and perhaps most importantly trade unions. Unison was the first to vote in support for the campaign, the Scottish Trade Union Congress followed suite quickly after.

This created significant leverage for the campaign both in wider society and among politicians, most crucially within the SNP itself, particularly after the party’s Youth and Student sections pushed for the party to adopt Tie’s cause.

Indeed the skeleton, unpaid operation rapidly exceeded the activities of an entire nexus of state and third sector organisations.

The slur repeatedly hurled at the LGBTI community and its campaigners over the decades by the Right has been that it represents an attempt at ‘social engineering’. Not content with attaining or defending formal equality for members of marginalised groups, it in fact seeks to change the cultural and moral basis of society itself.

The Tie movement has itself been the target of such attacks from fringe political and religious elements. But rather than retreat into a language of universal human rights and a purely formal legal recognition that has been associated with the LGBTI movement, the Tie campaign has embraced demands for a radical change in societal attitudes and their reproduction through institutions like state education.

Indeed deeper change in society than formal legal equality has always been an important strain of radical LGBTI thought. From its very inception, Tie had been inspired by the history of LGBTI struggles throughout modern history. It is a remarkable testament to that demand that “LGBTI history” and “LGBTI literature and lives” are included in the working group recommendation for teacher training, and that “and an awareness of the history of LGBTI qualities movements” what should be taught in schools.

This represents the evolution of demands for LGBTI campaigners from struggles for formal equality which have characterised recent efforts (and have been entirely necessary for the movement), to an attack on the cultural foundations of oppression.

This includes arming young people with the knowledge that fighting for justice changes society for the better. An this is perhaps the greatest monument to Tie’s success.