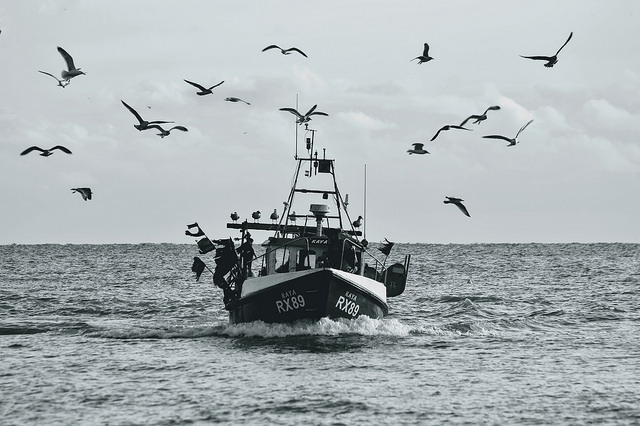 CommonSpace editor Ben Wray finds no one seems to want to talk about the big substance issues affecting Scotland’s fishing communities, the three most important being inequality, ownership and technological change

FIRST Minister’s Questions on Thursday [29 November] saw another round of turgid debate on the future of Scotland’s fisheries.

It went broadly along these lines: Jackson Carlaw from the Scottish Tories said that First Minister Nicola Sturgeon wanted to keep Scotland in the EU and thus not become an independent coastal state, and therefore was letting down Scotland´s fishers. Sturgeon replied in turn that Theresa May’s deal would not ensure that the UK had full control over UK waters and kept open the need to agree quota shares between the UK and the EU, thus the Scottish Tories had broken their promise and were letting down Scotland’s fishers.

Both the SNP and the Scottish Tories want Scotland out of the Common Fisheries Policy (CFP), so of course in the sense that neither is actually trying to deliver their fishing policy because both have bigger priorities, Carlaw and Sturgeon are both right.

But this evident fact is not why the SNP, the Tories and wider Scottish political discourse is letting down Scotland’s fishing communities. In reality the vast majority of people in coastal communities where fishing is or was an important part of the economy are reasonable and will understand that fishing does not supersede all other economic and political considerations.

READ MORE: Fiona MacInnes: Why it’s time to wake up, smell the fish, and really take back control

What lets those people down is the political tokenism of the debate. The means by which it is judged whether the Tories and SNP are defending Scotland’s fishing communities is defined so narrowly – in our out the CFP; UK independent coastal state or not – that the actual substance of the issues affecting the fishing communities is ignored altogether.

Primary case in point: inequality. The SNP and Tories both talk of Scotland’s fishers like they are one homogenous group who rise and fall together. The truth could hardly be more different.

As GreenPeace’s investigative journalist unit Unearthed reported in October: “In Scotland – the biggest fishing nation in the UK, with two-thirds of the quota – the domination of the fishing industry by Rich List families is most pronounced.

“Five Rich List families control a third of Scottish quota and have minority investments in companies that hold a further 11 per cent. This means, in total, companies holding close to half (45 per cent) of all Scottish fishing quotas are wholly or partly owned by five wealthy families.”

If that stunning inequality in the fishing industry was not bad enough, Unearthed’s report also shows how many of those families were at the centre of a major corruption scandal just six years ago.

“More than half (13) of the top 25 quota holders have directors, shareholders, or vessel partners who were convicted of offences in Scotland’s £63m ‘black fish’ scam – a huge, sophisticated fraud that saw trawlermen and fish processors working together to evade quota limits and land 170,000 tonnes of undeclared herring and mackerel,” Unearthed stated.

Judge Lord Turnbull said at the time that the case was “an episode of shame” for the fishing industry.

This should be right at the centre of the debate about the future of Scotland’s fishing communities. Instead, no one – not the Tories, not the SNP, not the official organisations which claim to speak on behalf of all of Scotland’s fishers – appear interested in talking about it.

Because while the past decade or so has been a very hard time for many fishing communities, it has been boom time for the rich families which dominate the industry, and due to automation are increasingly less reliant on fishers than they are on their control of the quotas to catch the fish. The big business UK fishing companies that have survived and now dominate the whole sector are actually extremely profitable within CFP, significantly more so than their EU counterparts on average.

The UK, which has the second highest fishing quota in the EU, negotiates its quote with other EU Fishing Ministers, but how the quota is allocated within the UK fishing industry is decided by the UK Government.

Thus, the UK Government is directly responsible for the enormous inequality in the sector. Its plans for fishing post-Brexit would as it stands see no redistribution of fishing quotas. Why are SNP and Tory MPs and MSPs in coastal seats not up in arms about this?

To be clear, there is a genuine debate to be had about the CFP. The system of Total Allowable Catches (TACs) to ensure quotas are maintained has seen mountains of fish go to waste, something that is neither environmentally friendly or socially useful.

Over-fishing was a major problem, especially in the first half of the 20th century, but it had actually stabilised prior to the CFP. However, fish stocks in some specific areas that were in danger of collapsing entirely, like North Sea cod, have only begun to increase in recent years. Ensuring sustainability must still be of the upmost importance, but it is not necessarily the case that this can only be done through the CFP.

“Any sober look at the fishing sector and coastal communities would tell you that the issue of inequality, ownership and technological change is much more significant than quota shares and TACs.”

The basic principle behind the CFP – that waters are a common resource and fish do not belong to any one nation-state territory, moving freely between them – is a sound one, but the EU has also purchased fishing rights in African coastal areas for EU trawlers to catch in, and the application of the CFP principles is not always applied fairly, with Spain known to be a state that regularly breaches the rules.

But all in all, any sober look at the fishing sector and coastal communities would tell you that the issue of inequality, ownership and technological change is much more significant than quota shares and TACs.

Labour shadow environment secretary Sue Hayman has called for “urgent action to use the powers that [the UK Government] has domestically to redistribute fishing quota to deliver a fairer deal for smaller boats”. It’s unlikely this is going to come from a Tory Government, which would be more likely to use increased control of UK waters unsustainably than to share out the profits more equally. But maybe a Labour government would, or an independent Scottish Government, in or out of the CFP?