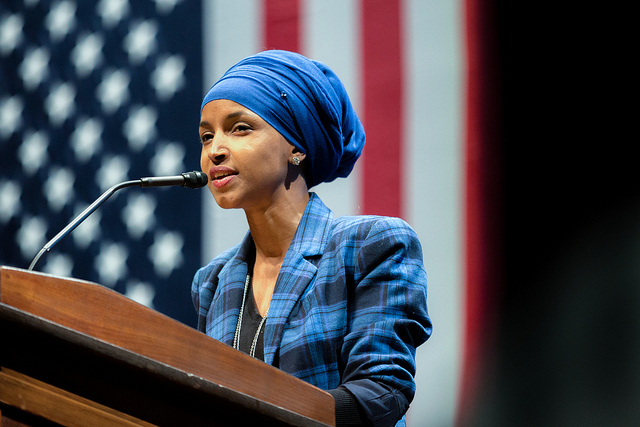 In combating both prejudice and disingenuous attacks, leftists in the United States have achieved greater success than those in the UK

As those who have followed news from the United States will already know, political attacks on the Congresswoman Ilhan Omar – a former refugee from Somalia, one of the first Muslims elected to the US Congress, and a stalwart critic of both US foreign policy and America’s consistent support for the Israeli Government – have escalated into a carefully orchestrated firestorm following remarks made last month, in which Omar discussed the political influence of those who argue that “allegiance to a foreign country” is acceptable.

This was recognised almost universally as an implicit critique of the powerful pro-Israel lobby within the US (not to mention a pertinent subject for discussion in a country that has been driven to hysteria by the possibility of Russian influence in its domestic politics). It was also, almost immediately, made subject to disingenuous and intentional misreadings by those who consider any criticism of Israel an act of unspeakable, unforgivable heresy.

Hastily, House Democrats cobbled together a resolution formally condemning antisemitism which, while not naming Omar directly, has been interpreted across the political spectrum as a rebuke to both her statement and her argument, and was expected to be voted upon on Wednesday. That vote did not come to pass.

The resolution is now expected to be voted on today [7 March], but only after being updated to include similar language on anti-Muslim bias and “other forms of religious bigotry.” That such references had to be included at the last minute, as an afterthought – and only after Omar was subject to repulsive Islamophobic and racist invective by the Trump administration and the GOP, as well as daily death threats – arguably tells you all you need to know about House Democrats’ priorities. However, the fact that such a backtrack occurred at all stands in testament to the tidal wave of support that Omar has received, but which the Democratic establishment seemingly never saw coming, or at least presumed could be safely ignored.

Many have, not unreasonably, detected echoes of the controversies surrounding antisemitism accusations against the UK Labour Party in the attacks on Omar. The fact that the 14 members of the Conservative Party who have been suspended for Islamophobic comments have hardly received the same level of press coverage as Labour’s ongoing ‘crisis’ further demonstrates that not all breeds of prejudice matter equally to those politicians who draw a line between anti-capitalism and antisemitism, or those pundits who condemn bigotry from a magazine that has published defences of the Wehrmacht. However, the case of Omar has highlighted as many distinctions as similarities between US and UK politics.

Amidst all the hue and cry, this week’s developments have offered a curious challenge to a widespread assumption regarding the insurgent Western left typically identified as having coalesced around both Corbyn’s leadership of Labour and the rise of Bernie Sanders as a viable presidential candidate.

Swathes of socialists throughout both the US and the UK have often perceived the Corbynite Left’s success in gaining control of Labour as an advance on the achievements of Sanders, who is sometimes painted by admirers and detractors alike as a kind of ‘Corbyn-lite’. More than a few American socialists wonder whether the ‘Corbyn doctrine’ is replicable within US politics, with the implicit assumption that the UK Labour leader – who remains, at present, a socialist leading a non-socialist party, who has not even managed to budge his party’s on-paper support for Trident, and whose last election manifesto was economically to the right of the SDP’s in 1983 – is fundamentally more radical than the ‘Cold War social democrat’ now making his second play for the White House.

One can understand how such a conclusion was reached. In both taking the helm of the party and successfully rebuffing repeated attempts to dethrone him, Corbyn apparently exerts more control over Labour than Sanders does over the Democratic establishment, the many loyalists of which will still sneer that he is not a ‘real’ Democrat, considering his prior, long-standing independent status as, ironically enough, a kind of dual-loyalty in itself.

And yet, recent events have thrown a wrench in this analysis. By most superficial measures, the Democratic establishment which has repeatedly tried to torpedo Sanders’ ascendancy is more powerful and better organised than the bumbling clown-car of Corbyn’s opponents within Labour (not to mention – why bother? – the newly established 1997 tribute-act known as the Independent Group). So why has that same Democratic establishment been so spectacularly chastened, while the controversies surrounding accusations of antisemitism under Corbyn continue unabated, with no end in sight?

A good starting point would be to recognise the individuality – politically and personally – of Omar herself. Despite become a focal point within the American Left that has become so emboldened since Sanders went from being a Vermont novelty to vector for existential change in American politics, she is not a foot-soldier for Bernie, nor are the attacks upon her purely a proxy war over his candidacy. Indeed, Bernie’s initial reticence before eventually intervening in her controversy elicited much condemnation from his ideological supporters, as did the apparent equivocations made by the democratic socialist congresswoman Alexandria Ocasio-Cortez while defending Omar. The conclusion this suggests is that the American Left – which, contrary to the condescending assumptions of self-satisfied Corbynites, needs no lessons from the UK in radicalism – has shown more independence of thought and action than their British counterparts, and is far more willing to hold its figureheads and celebrities to a higher standard.

By contrast, Labour’s antisemitism controversies have calcified much of British political discourse into a test of one’s loyalty or opposition to Corbyn: are you with us or against us? It will not come as a surprise – though many with regard it as inconvenient – that accusations of anti-Jewish prejudice, whether made in bad faith or not, are often treated as a matter of damage limitation for the Corbyn ‘project’ by its defenders, and as a weaponised tool by its enemies. The issue at hand is sidelined in favour of political priorities, and becomes a kind of sport – and if one side loses this round, well, there’s always the next time. This is no way to combat racism of any kind.

Yet drawing an equivalency between criticism of the Israeli state and antisemitism is not, contrary to the insularity of UK politics, a problem simply for Labour – recognising this is why so many dedicated pro-Palestinian activists (who care more about the suffering of Palestinians than the party’s success) have been drawn into the debate, and have often argued their case with more eloquence than Corbynite careerists.

As last year’s Spring SNP conference demonstrated in its humiliating rebuke of John Mason’s apologism for Israeli violence in Gaza, the SNP rank-and-file is overwhelmingly sympathetic to the Palestinian struggle; should this feeling ever be accurately represented in the SNP leadership beyond occasional bouts of careful rhetoric from the First Minister, it would be complacent in the extreme to assume the tactics employed against Corbyn would not be levied north of the border. Indeed, they already have – albeit without much success – following the Scottish Greens’ 2015 vote in favour of right of return for Palestinian refugees and condemnation of Israel’s numerous violations of international law.

The massive and heroic defence of Ilhan Omar was not predicated on whether it will be of use to the Democratic Party, or to Bernie Sanders, or any other cynical calculation. In abiding by principle alone, it has forced both those who hope to achieve power with the American Left’s backing, and those who hope to suppress it, to show greater honesty and bravery than they might have otherwise. An independent, unapologetic American Left, beholden to nothing but its own beliefs, has once again asserted itself – as it has repeatedly since 2008 – and has shown the necessity of such an ideological current, in defiance to those who demand that socialism requires fealty to party or personality.

That is the lesson the United States has shown those in the UK whose imaginations cannot extend beyond the parameters set by the Labour Party. It remains to be seen whether they will learn from it.