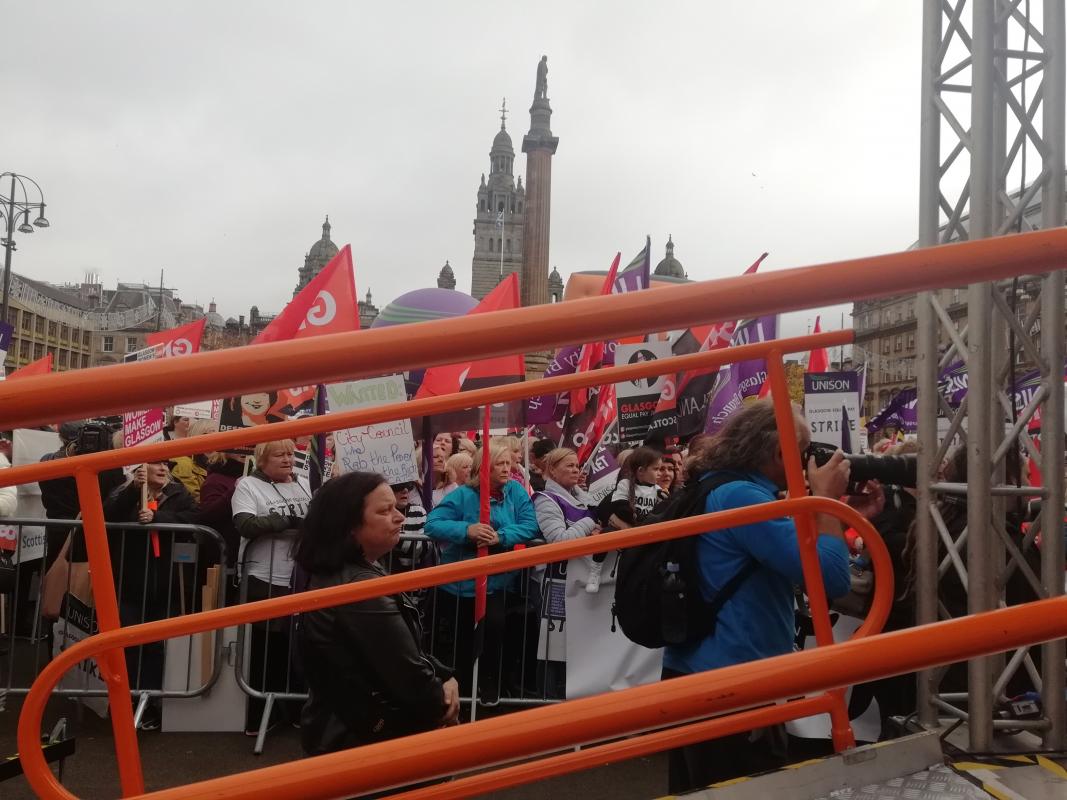 Reporting of the Glasgow Women’s Strike has focused on the political dynamics, but the issues it raises are global and systemic – how to achieve gender equality in practise.

COVERAGE of the Glasgow Women’s Strike thus far has focused on the national political dynamics with strong suggestions that the unions’ full attention on the issue was only sharpened as a consequence of the SNP taking over leadership of Glasgow City Council in May 2017.

The political counter argument is that the dispute over gender pay discrimination originated during Labour’s 40-year domination of Glasgow city politics, years before SNP leadership of the council.

This tribal debate, however, obscures the fundamental issue of the strike: gender equality. Compared with a global social and cultural movement to end gender discrimination, the SNP v Labour grudge match merely draws attention to how both parties have failed to grapple with the fundamental challenge of gender and work in the 21st century.

The response of Susan Aitken, leader of the Glasgow City Council and SNP-councillor, to the strike is the prime example of politicians’ inability to grasp that gender equality is the foundational issue exposed by the strike. Aitken has relied on a playbook of common anti-strike rhetoric, emphasising that the walk out would endanger the public, would delay any possible deal, and was a result of the continued misrepresentation of workers’ interest by union leaders.

READ MORE: ‘This is not a fight about party politics’: Women’s equal pay strike rocks Glasgow

Aitken has said “I’m not entirely sure the women know the basis on which they are striking” and “what they [the strikers] now want is not at all clear”, at best a line which seeks to divide union leaders and strikers, and at worst the belittling of working class women, many of which have never been on strike before.

The source of the strike flows back to Glasgow City Council’s attempt to end pay discrimination in the workplace in 2006. The Workforce Pay and Benefits Review (WPBR) sought to equalise the council wide gender pay gap by integrating administrative and manual roles in a single pay and grade system. Male-dominated manual roles such as refuse collection were deemed as the same value as female-dominated roles such as carers, cooks and cleaners, and so these jobs were classified in the same grade with the same pay.

One of the problems with the WPBR scheme was pay protection. To bring pay in to line across the same grade, the council planned to reduce pay in some-male dominated roles with the introduction of the new scheme. Pay protection was brought in by the council to effectively maintain the higher pay for male-dominated manual roles. Initially planned for only a short period, pay protection ended up lasting for over three years. When faced with the reality of implementing a solution to move toward gender equality, Glasgow City Council instinctively sought to defend the rights of traditionally male roles.

The implementation of WPBR, and the long-running legal disputes that it has caused, remains the responsibility of the Labour-led council of the time. The Labour council spent £2.5m in legal fees fighting these challenges instead of facing up to the problem. In light of this, it is understandable that Jeremy Corbyn and Richard Leonard’s messages of support on social media for the strikers yesterday is seen as distinctly hypocritical. But the Glasgow women’s strike exposes the issue of how society values women and work, a much deeper issue than partisan party politics.

This is about institutional inertia and gender bias. Susan Aitken may be the figurehead for the Glasgow City Council, but the day to day operation of the council is carried out by career civil servants. Speaking on the Today Programme yesterday, Unison organiser Peter Hunter openly acknowledged Aitken’s frustrated attempts to release a 2010 Equality and Human Rights Commission report on WPBR has been kept secret by the council. The STUC have also highlighted what they see as the institution of the council frustrating the direction of the new SNP leadership, stating: “the reason for the strike is clear – the claimants have lost faith in the willingness of senior officials to deliver Councillors Aitken’s instructions”. It seems a deeply entrenched institution in the civil service, used to 40 years of Labour leadership, is now working to maintain deeply entrenched institutional sexism. Again, this raises a systemic issue, not a narrowly partisan one.

Close the Gap, a policy research team examining women’s participation in the labour market in Scotland, called the issue of equal pay “the perennial problem”. In wake of the Glasgow women’s strike, there has been talk of the example being followed in other councils in the UK, other industries and in other countries. The Glasgow women’s strike is a window into a global question of how gender pay equality is achieved and how a legacy of injustice is addressed.

Emma Ritch, executive director of Engender, told CommonSpace that the strike is explicitly about how women’s work is valued. “Across economies, we see female-dominated occupations like cleaning, catering, clerical, caring, and retail undervalued and underpaid. Sexist attitudes about how much to value, for example, a childcare worker versus a refuse collector are baked in to pay systems, giving rise to unlawful pay discrimination.”

Ritch emphasises that this is an issue not linked to one party-political dispute: “Women from across the political spectrum have advocated for pay equality over the last few decades, and for solutions to the difficult, technical problem of unpicking and remaking pay systems to value women’s work appropriately.”

The message from yesterday’s march should be loud and clear. This is a strike for equality.