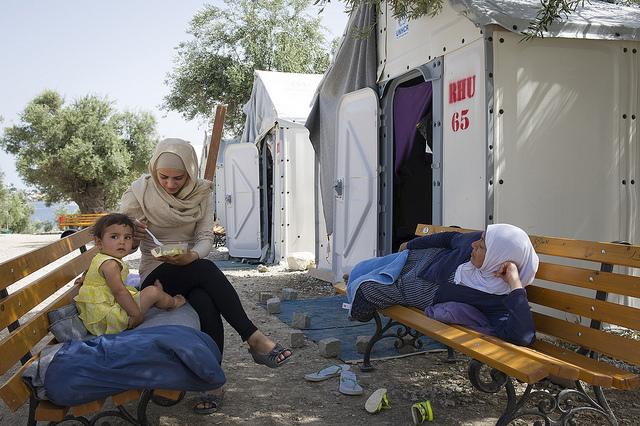 On #WorldRefugeeDay, CommonSpace editor Ben Wray says that while Donald Trump’s family separation policies towards migrants seeking to enter the US has touched a nerve, the problem of how we treat immigrants and refugees is much deeper than one President and will require systemic changes to address

DONALD TRUMP’S splitting up of families seeking to enter the US has touched a nerve. Opposition to the family separation policy is so widespread that even Trump is saying he is against it, though he is unwilling to use his power to end it, saying Congress must pass legislation for an alternative way to process those entering the US ‘illegally’.

On Twitter #TrumpConcentrationCamps is the most used hashtag to describe what is going on, as images of migrant children lining up to enter sinister-looking makeshift dorms go viral. Even the BBC’s report casually compares Trump’s policy to that of the Nazis.

But while it may be reassuring to know that western populations can still summon a bit of outrage on behalf of the most vulnerable, that we have not become so desensitised to the plight of those deemed to be illegal as to entirely ignore their suffering, the sudden consensus emerging, from the CEO of Google to the head of the GOP in the Senate Mitch McConnell, should make us suspicious – is Trump really the problem here?

After all, look to the southern edges of Europe and you will find treatment of refugees who have reached European shores which is every bit as disgusting as the Donald’s, and all licensed by Brussels.

The EU did a grubby deal with Turkey to deport refugees to the country in return for cash and visas for Turks.

Refugees stay in EU-funded camps in Greece that are massively overcrowded, dangerous, with no clean water and human faeces everywhere, waiting for an asylum decision from a service that is massively under-resourced.

Eva Cosse of Human Rights Watch said this unbearable situation is a deliberate policy from Brussels to discourage refugees from coming to Europe.

“It’s like the EU is saying, ‘Don’t come here, because if you do, this is what you’re going to suffer’,” Cosse argued. “Overcrowded, very dirty, very unsanitary camps, sleeping literally on the concrete, on the ground. And this is happening in the European Union. It’s unimaginable.”

And the EU’s policy of making the refugee crisis someone else’s problem works. Turkey, Bangladesh and Uganda alone received over half of all new refugees in 2017.

“International responsibility-sharing for displaced people has utterly collapsed. Rich countries are building walls against families fleeing war, at the same time as less money is available for aid to people in conflict areas,” said Secretary General of the Norwegian Refugee Council Jan Egeland.

When you look at it like that, we do not have a Trump problem, we have a world governance problem. The number of people displaced from their homeland has increased for the sixth year in a row. 68.5 million people were forced to flee their country in 2017, the same amount of people as the population of the UK.

But if the rich West is not willing to take responsibility for this crisis now, and is becoming ever more virulently hostile to doing so as the challenge increases, what on earth is going to happen when the coming climate refugee catastrophe is fully unleashed upon us?

Some estimates suggest that by 2050 there could be anywhere between 150-300 million people displaced from climate change alone, the most prominent places being Africa and south-east Asia.

This will dwarf the current refugee crisis, which already scientists believe was partly driven by the movement of climate refugees into Syrian cities in 2006-2011, with no infrastructure in place to provide food, water and housing for them.

And of course, we are talking about a climate crisis forged in the industrialised West, but which will be felt most harshly by those in the global south who bear least responsibility for it.

Trump may have pulled out of the Paris Climate Agreement – but let’s be honest, what were and are European governments doing to enforce it anyway? Like the refugee crisis, the climate crisis is another one on which Europe has decided to look the other way, making it someone else’s problem.

Comparisons on Twitter have been made between Trump’s migrant incarceration policy and the 2006 dystopian thriller Children of Men.

One of these images is a picture of America’s internment camp for immigrants, the other is a scene from dystopian future film Children of Men.

The US is in breach of UN Human Rights conventions, and is doing so under “a law” that does not exist.

In the film, refugees are “hunted down like cockroaches”, and Trump used similar dehumanising language yesterday [19 June] when said immigrants “pour into and infest our Country”.

Our dystopian future is here now on the US-Mexico border, but it’s also in the EU refugee camps on Lesbos and other Greek islands, and it’s at Dungavel detention centre here in Scotland as well. Trump or no Trump, systemic change will be needed to alter that.