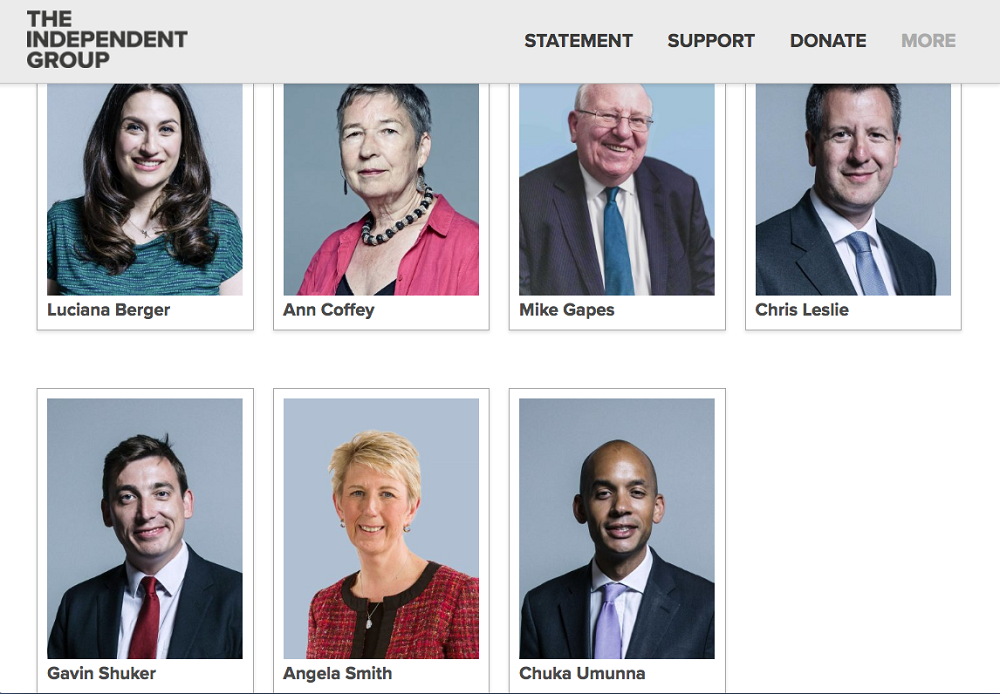 The new group is unlikely to be able to generate success for their own project, but is that what the split is really about?

THE long-trailed quitting of the Labour party by a group of centrist MPs has finally occurred, but more as a whimper than a bang.

Chuka Umunna, Luciana Berger, Chris Leslie, Angela Smith, Mike Gapes, Gavin Shuker and Ann Coffey all quit claiming to have been forced out by a mood of intolerance in the party.

But what are the prospects for the success of their new Independent Group, and how much can we draw on previous splits in Labour’s history to understand this development?

The un-magnificent seven are no gang of 4

Many commentators are drawing comparisons with the breakaway SDP, which was formed by four former leading members of the Labour right in 1981, including two sitting MPs, Roy Jenkins and David Owen.But there is really no comparison to be made here.

The ‘gang of four’ had experience in senior political and institutional posts, a coherent vision of the kind of political force they were trying to achieve and took 26 MPs with them out of the party. They enjoyed substantial momentum, partly generated by an enthusiastic press. Despite this, their project failed and petered-out throughout the 1980s. The party merged with the Liberals to form the Liberal Democrats, itself now at a very low ebb.

Survival for a political element under Britain’s First Past the Post system is hard enough when you have talent, charisma, a strategy and organisation. The Independent Group appear to have none of this. They have no backing in the unions. They have the backing of no local Labour party; indeed some of them have been the subject of no confidence votes in their (former) local parties.

They did not choose to organise a split in the membership. To be sure, their support in the membership is very marginal. But it could at least have filled a modest room for the launch. The decision instead to launch the new outfit – which is a private company rather than a political party at this stage – to a press pack shows a complete lack of political nous, and a misunderstanding of the populist political moment.

The statements made by the seven make it clear that their political frustrations are not those of the country. They did not substantively address the crisis millions are facing – the housing shortage, food and energy poverty,  the decrepit nature of the country’s infrastructure, its gross regional inequalities of wealth and power or abusive employment practices and precarious working environments.

Bizzarely, they didn’t spend much time even discussing Brexit and the wider constitutional crisis. Instead they focused remorselessly on what they perceived to be their own mistreatment within the Labour party.

This is a narrative that has been cultivated by a small group of Labour MPs and their friends in the media. It is not something which has emerged from a major movement of public opinion.

This is an incredibly unsympathetic image to present to the country, with two main tributaries. The first is that Umunna and company are not labour movement figures as such. They lack much or any experience of political organisation, of leading people into political action. They were mainly bred in the era of New Labour, an era party ideologues claimed would last forever at the end of history.

The second is the very ideological nature of the project.

Is this really about changing politics?

There were no policies at the launch. Besides the overweening emphasis on the MPs themselves, there was only the vaguest of ‘value’ statements. These include promises of a ‘mixed economy’ and a representation of perceived ‘British’ interests, affirmations of British national pride and so on. Almost all parties claim these values. Another value calls for MPs to be ‘accountable’ to their constituents, prompting Shadow Chancellor John McDonnell to call for by-elections in their seats.

The nebulous character of these value statements leads observers to ask for the political records of the 7 MPs. They are supporters of privatisation and an agressive foreign policy, making it unclear how they will contest for leftwing votes.

The launch of the Independent Group was so uninspiring, and so apparently lacking in definition and purpose, that it is worth venturing that the new outfit isn’t about realigning British politics as such, but attacking the Labour party.

Indeed, the only glimpses of passion during the press conference where when the seven got to deride the party and its leadership in the most aggressive terms.

Coffey said “antisemitism is rife and tolerated” in Labour, Leslie that the party has been “hijacked by the machine politics of the hard left”.

Gapes took this to ridiculous lengths, boasting of his lifelong faction fight with the left, from his student days struggling against “Trotskyists” to his current hobby of “fighting battles on Twitter”.

But besides this there was next to no criticism of the government which has stalled the Brexit process, which has presided over nine years of austerity, and which is struggling under constant parliamentary defeats. All the focus was on attacking Corbyn and the left.

The function of this new manoeuvre is clearly a continuation of the internal Labour faction fight.

It serves both as a stick to beat Corbyn and a possible electoral platform to damage Labour in key marginals, by orientating on Brexit. We can expect the new group to focus much of its activity of attacking Labour and the left more broadly, whilst paying little attention to the right.

Interestingly, no Scottish Labour MPs (or other elected politicians) joined the split.

Ian Murray, the only Scottish Labour MP to survive the 2015 General Election, led by Jim Murphy – a politician he shares much more political ground with – has long been a trenchant critic of Corbynism.

It may partly be the memory of the electoral beating Labour took under ‘centrist’ leaders that exerts a disciplining effect on the Labour right in Scotland. It may also be that the political context in Scotland insulates them from some of the factionalism. Though the left controls the party in Scotland and factional tensions do persist, it is sufficiently small and damaged by recent events that different factions must all serve in its front bench, and energies are mainly focused on trying to extricate the party from its marginalisation. There is also a problem that the new outfit would have to contend with a very crowded field in Scottish politics.

That said, Ian Murray’s letter responding to the split was among the most hostile of the Labour leadership. It is certainly the case there is a constituency for the Independent Group’s anger towards Corbynism in the Scottish party, and splits here are not impossible.

Yet there may still be one more restraining factor. The above discussed narrative of the Independent Group is that of a professional politics and media bubble. It’s possible therefore that politicians at a greater distance from the Westminster world may be able to see its limitations.

Donate today to get the media you deserve.