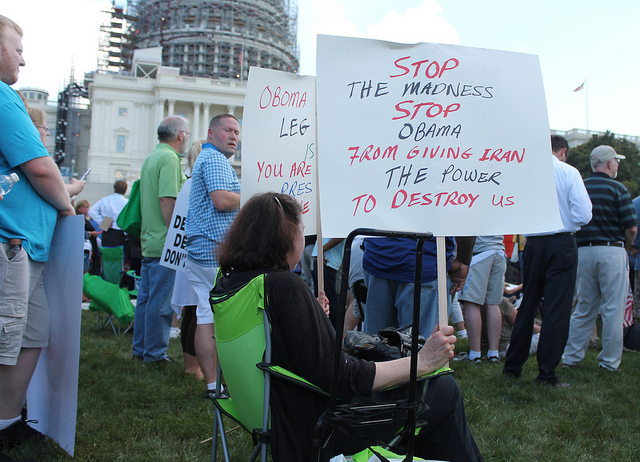 US’ success in unilaterally ripping up the Iran deal and re-imposing sanctions despite European protests shows it’s wrong-headed to think the American Empire is entering a Last Days of Rome scenario, Ben Wray finds

JUST one day before the midterm elections in the United States, Donald Trump has shown that when it comes to hard power, America is still the world’s policeman, regardless of how just or unjust its actions may be.

Trump’s re-imposition of sanctions on Iran unilaterally breaks the legally binding Iranian nuclear deal signed by Barack Obama, the other UN Security Council permanent members and the European Union in 2015. Even though it’s the US, not Iran, who has broken the nuclear accord, the so-called “rules based liberal order” will in practice line up behind Washington, as there is almost no major corporation in the world which values trading relationships with Iran over America.

In the immediate aftermath of Trump’s announcement that he was pulling out of the Iran deal, there was tough talk from Brussels that they would honour the Deal with or without the US. German Foreign Minister Heiko Maas said a new international payments system should be established so that it was possible to avoid the use of Dollars in trade with Iran. There was talk of EU corporate giants prepared to continue Iranian investments even if it meant being cut off from the US market.

Almost nothing has materialised. The Dutch aviation company KLM was the first to succumb, saying it would end its airline to Tehran before US sanctions kicked in. No new international payments system has been established. EU leaders say they are still committed to the deal, but admit that they are now trying to salvage 30-40 per cent of EU-Iranian trade. EU leaders have not even be able to squeeze out of the Trump administration exemptions for basic food and medicines, The Guardian reported on Friday [2 November], with the head of one NGO saying the decision put thousands of lives at risk.

READ MORE – Analysis: After Belhaj apology and the Trump Iran pull-out, will the UK go on being America’s great British poodle?

“To date, they have not managed to put in place a mechanism for sidestepping the sanctions without antagonising the Trump administration,” The New York Times reports.

The US unilateral cancellation of the Deal is just the latest litmus test of what the most powerful economy with the most powerful military can get away with on the international stage, after it joined Syria and Nicaragua in being one of three rogue states to pull out of the Paris Climate Agreement. The answer is clear: when it comes to the global order, there is one rule for the US and one for the rest.

Angela Merkel and Emmanuel Macron may dispute this, but so far their bark has been bigger than their bite. The now infamous picture of the two leaders leaning over a table at the G8 summit in Quebec while Trump leans back smirking looks in hindsight less like an image of European defiance and more desperation, seeking to coax the US President into playing by the rules of western liberalism but without having any means by which they can force him to do so.

Macron in particular looks not just like a diminished figure at national level (his poll rating has dropped to a new historic low) but also internationally, having spent months trying to flatter Trump into coming on board with his worldview, and failing entirely, instead just lending legitimacy to the Donald’s Presidency.

READ MORE: 4 ways that the United States under Trump has proven it is a rogue state

The hard facts are that, Trump or no Trump, the 2008 recession which was sparked by a US housing crash has, 10 years on, left the EU worse off than across the pond. Whereas Obama responded to the crash with economic stimulus, the economic governance mess of the Eurozone, with its strict fiscal and monetary rules and structural imbalance between Southern and Northern Europe, meant it went through a crash far longer and deeper than the US one.

Add to that an increasingly assertive Russia and a European defence system reliant on Washington-led Nato, and the EU – where unlike the US is a union of nation-states not a federal system with a strong central state – is not in a position to challenge US global hegemony.

China is in a stronger position (although there is good reason to believe that it is heading for its own economic slowdown) and Xi Jinping has attempted to position himself and the Chinese Communist Party as the defenders of globalisation, something which may sound improbable but considering it remains the workshop of the world makes some sense.

But look at the fundamentals of the global capitalist economy and the US remains in a very powerful position to dictate terms. Its navy controls every major seaway; over 70 per cent of global trade passes through the Atlantic and Pacific – the US is the only economy in the top 10 to border both oceans; 55 of the top 100 global corporations are American (see graph below); it remains the global reserve currency for international trade. 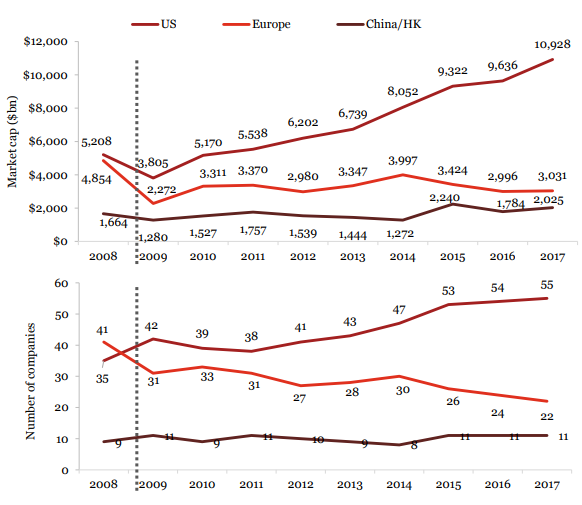 As for the UK, the immediate consequences of Brexit seems to be to reaffirm our poodle status, deferential in almost everyway, but we are a loyal dog that is less useful to its master than any time in the post-war era. Sad.