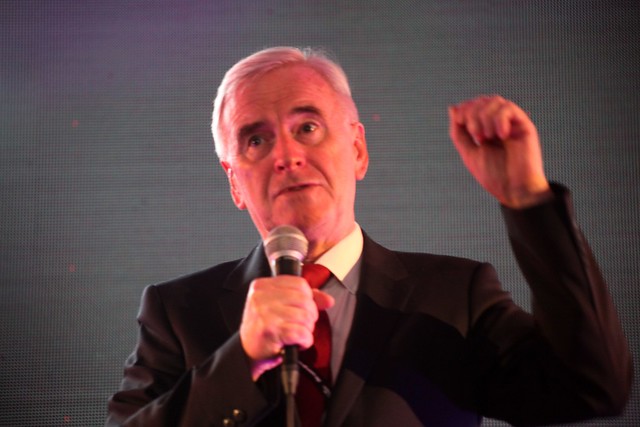 The Corbynite inner circle has indicated its openness to a second vote before – for it to mean anything, a commitment will need to be secured

FOR the embattled ranks of Scottish Labour, it was an epic betrayal; for those invested in the future of the Union, an act of supreme, unforced recklessness; for enemies of the Corbynite project within Labour, further proof that the party high command has lost touch with political reality.

For John McDonnell… It was Tuesday.

In practical terms, this is business as usual for the mercurial shadow chancellor. Everyone is yelling at him; vague plans not yet enacted are nonetheless being treated as definite and disastrous in equal measure, and all he’s done is echo what Jeremy Corbyn has already repeatedly said. The dubious pleasure of being interviewed by Iain Dale hardly seems fair recompense.

McDonnell’s airy admission at the Edinburgh Literature Festival this week that a future Labour government would not stand in the way of a second Scottish independence referendum elicited an outrage from the traditional unionist ranks that may be understandable, if not entirely justified.

Corbyn himself first gave Scottish Labour palpitations on constitutional affairs in 2017, when he told the Press Association: “If a referendum is held then it is absolutely fine, it should be held. I don’t think it’s the job of Westminster or the Labour Party to prevent people holding referenda.” Later that year, the Labour leader made an awkward U-turn while launching the party manifesto, describing a second referendum as “unwanted and unnecessary”. And yet, at the 2018 Labour conference, Corbyn indicated that he was not “ruling out” giving consent for another vote.

READ MORE: SNP calls on Richard Leonard to ‘get on the right side of democracy’ as Scottish Labour leader butts heads with John McDonnell over indyref2 comments

While McDonnell’s latest view is admittedly less cryptic than these earlier instances, it is still within a recognisable tradition. Such gnomic pronouncements have been made before, with little impact – but, crucially, never within this context. McDonnell’s comments came a mere day after the Ashcroft poll revealing majority support for independence amongst Scottish voters, and the hysteria this engendered in the Union’s self-appointed champions was evident in their reaction to the shadow chancellor.

Scottish Tory leader Ruth Davidson said that McDonnell would “happily sell Scotland down the river” – an informed perspective, since Davidson is currently up a certain creek without a paddle.

Within Labour, Douglas Alexander, former cabinet minister-turned-Trivial Pursuit answer, accused McDonnell of parroting SNP propaganda by referring to a parliament located in England as an “English parliament”, while Edinburgh MP Ian Murray – he of the Amazing Butcher’s Apron Dreamcoat – blustered that the Labour Party is an “internationalist party founded on a vision of solidarity”. He carefully overlooked that it was also founded on the idea of Scottish home rule.

The commentary has been fun too, if you enjoy contortionism: writing in the Guardian, Jonathan Freeland argued that McDonnell had offered the SNP too much in exchange for their notional support for a Labour government: “In politics, it’s possible to have logic, and even principle, on your side – and still get it badly wrong.” That certain columnists regard logic and principle as entirely optional – even surplus to requirements – will not come as a revelation to some readers. Nevertheless, declaring yourself against democracy and rationality isn’t a great rallying-cry for anyone other than Salvador Dali.

READ MORE: Chapping at the door: Interpreting the Ashcroft poll

Chief amongst McDonnell’s critics – in prominence, if not necessarily political influence – was Scottish Labour leader Richard Leonard, who many saw as having been stabbed in the back by the shadow chancellor’s remarks. Within 24 hours, a combative Scottish Labour press release announced that Leonard had met with McDonnell to tell him that a second referendum was “unwanted” and “unnecessary”. The release carefully avoided any mention of what McDonnell said in response.

This afternoon, it became clear why. According to comments reported in the Herald, McDonnell doubled down on his earlier statement, albeit with one important clarification: “What I said yesterday,” he added, “that was not picked up, is actually what I want is a Labour government, and let us demonstrate as a Labour government what we can do to transform people’s lives.

“And if, after a few years, people want to come back and say they want to test the water on an independence referendum then fair enough, that’s up to the Scottish people and the Scottish Parliament. I’m not here to block a democratic exercise by any means.”

The key detail – “after a few years” – adds some detail to the scenario McDonnell’s original comments hinted at; not only does it anticipate that a potential Corbyn government would have some time to establish itself and put policies into action, but it would appear to refute the timeframe envisaged by First Minister Nicola Sturgeon with her plan to secure a second independence referendum before the next Holyrood elections in 2021.

However, McDonnell further clarified that while Labour would campaign against having a referendum – Scottish Labour need something to fill their hours – Labour would not use any “parliamentary devices” to block it, undercutting Sturgeon’s claim that “the big bad English” are preventing Scotland from holding a second vote. Essentially, all options are on the table.

Undoubtedly, this gives the SNP cause for both hope and scepticism. The latter will be fed by the reactions from some Labourites to McDonnell’s statements. As these have shown,  the ability of Corbyn and his inner circle to crush dissent within the party is much exaggerated, largely based on their success in seeing off ham-fisted attempted coups and little else; the zombies may not have eaten them yet, but the living dead are still lumbering about outside the bunker, with time and a thirst for social democratic brains on their side.

Therefore, it should not be taken as a certainty that Corbyn or McDonnell will be able to convince Labour MPs, or even the rest of the shadow cabinet, that a second Scottish referendum is worth supporting. If a minority Labour government wants the security SNP support could provide – a confidence-and-supply arrangement that can stand the test of time for the non-specific “few years” McDonnell anticipates – then it will need to convince the SNP that it can be relied upon to deliver a Section 30 order without being consumed by internal recrimination and chaos.

Now for that ‘hope’ stuff. For some time, and particularly since Lord Snooty and his pals arrived in Downing Street, the SNP has been wrestling with the intractability of its situation: it has a mandate, but nowhere to stick it. In other words, although Nicola Sturgeon is ostensibly devoted to pursuing a second referendum before 2021, she has no means of achieving it beyond requesting a Section 30 order from a Conservative government that has nothing to lose from denying her – place your bets on how many Tory voters will be offended by the negation of Scottish democracy – given that she has already ruled out a Catalan-style wildcat vote.

Between this Edinburgh rock and a hard place, McDonnell’s comments give credence to the route hypothesised by the Scottish political journalist Jamie Maxwell in July. Writing in Al Jazeera, Maxwell suggested that an informal coalition between Labour and the SNP could be achieved if Corbyn transferred the legislative authority necessary for a second referendum to Edinburgh, in exchange for SNP MPs backing Corbyn’s social and economic reforms when they were brought before the House of Commons. Indyref2 could even be delayed, if Sturgeon agreed not to implement it immediately.

Maxwell acknowledges that an obvious criticism of this synopsis is that it would undermine any chance of a Labour revival in Scotland. But since McDonnell seems happy to do that before a general election has even been announced, that possibility doesn’t seem to be as much of an issue as one might think.

Variations on Maxwell’s scenario have understandably been much discussed over the past 24 hours, and it still contains a great many steps and potential pitfalls which could derail the whole enterprise. Should McDonnell’s comments represent a genuine shift in UK Labour policy however – again, an uncertain premise – the short-term effect could be less predictable that some might think.

READ MORE: Analysis: What could Labour’s new position on Brexit mean for Scotland?

There has been some loose talk that McDonnell’s explosive intervention has effectively ceded Scottish unionism to the Scottish Conservatives and Liberal Democrats; those blithely drawing such conclusions should remember that while Willie Rennie and his parliamentary colleagues may be consistently shrill in their defence of the British state, the Ashcroft poll reveals the fastest growing party affiliation for Yes supporters is… the Lib Dems.

As for the Scottish Conservatives, now playing host to a one-woman production of The Life and (Political) Death of Colonel Davidson, both their MPs and the bulk of their membership have made it painfully clear that their sympathies lie with the Johnsonite Right of the UK party, who see the end of the Union as a price worth paying for a Tory Brexit, rather than their erstwhile superstar Scottish leader. Neither of these situations suggests safe hands for the Union’s future. So while warnings from Common Weal’s Dr Craig Dalzell over the failure of the Scottish Government to get on a war footing have definite merit, it’s worth noting that their would-be opponents in indyref2 are even more shambolically ill-prepared.

In these strange days, certainty is in short supply for anyone. Labour want to know when they will be fighting the next general election. The Scottish independence movement want to know when they can expect their next shot at the dream. Unionists want to know that divisive constitutional questions have at last been put to bed. McDonnell’s statement hints at much, but assures nothing. Still, as one of the shadow chancellor’s favoured authors once put it: “There is great chaos under heaven – the situation is excellent.”