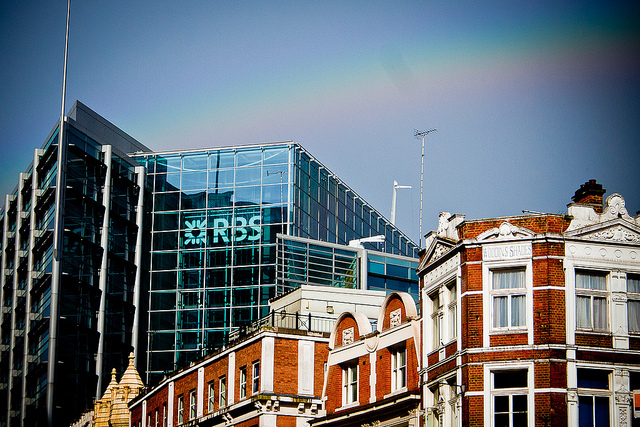 RBS have once again been forced to pay a fine for reckless and potentially criminal behaviour. The list of offences is a long one, it’s owned by the state – but still our politicians are silent

If this was an individual, say Fred Goodwin, there would be no need to demonise him, his record would speak for itself. But because it is a faceless institution, and a very powerful one at that, and because that institution holds a gun to the public’s head shouting things like ‘mess with us and we’ll move abroad’ and ‘you don’t want another crash do you? Well then do what we say’ our politicians do nothing.

Now throw a final point into this scenario. As well as all the bad things this institution does and threatens the public with, the politicians – who (are supposed to) act on behalf of the public – have a majority stake in this institution. They own it. They legally have the right to make it do what they want to do. But still our politicians do nothing.

This scenario is real, and the institution I am talking about is RBS. CommonSpace has today [16 August] detailed the latest in a long list of offences dating back before the financial crash, where RBS bankers talked openly about selling bunkum mortgages and bringing down the US economy.

We also reported on new polling which shows the general public have had enough of the banks, and that RBS is rated as the joint-worst bank in the UK. By large majorities, the public know that RBS and its ilk have not been punished for the pain they have caused the country and are likely to cause similar pain in the future.

Still our politicians sit silent. The list of politicians demanding serious action in the UK is shorter than the list of offences RBS has committed over the past 20 years. One of the last worries on the mind of RBS executives tonight will be what politicians are going to do to rein them in.

The ideology of what Yanis Varoufakis calls bankruptocracy – rule by bankrupt banks – starts at number 10 Downing Street but it peters all the way through our political class. They live in fear of the money markets punishing them for trying to do the only rational thing, which is to stop bankers using money creation via credit to exploit the people and compete with one another in a big game over who can earn the biggest bonus for that new yacht this year.

Out of control finance has not been reined in after the crash because politicians are terrified of what reining it in would look like, when they should be terrified of consumer debt reaching new peaks and new bubbles emerging in things like car loans, as well as out of control house price inflation. None of this is sustainable in any way shape or form, but our politicians don’t seem to get it.

And I do mean all of our politicians, or at least the ones with power or any serious chance in the near future of getting it.

In the 2017 General Election Jeremy Corbyn was pushed on why the party’s manifesto does not include nationalising the banks, despite his personal views in favour of that in the past, and Corbyn’s first line in response was: “Some of our banks are perfectly run as it is, actually”. Really? Which ones, Jeremy?

The SNP’s Growth Commission is a banker’s paradise, not only putting our whole fiscal regime into the hands of the City by using pound sterling informally, but also embracing the UK’s rulebook on financial regulation – the very rulebook that has allowed the likes of RBS to do what it’s done and continue to do – wholesale.

As the 10 year anniversary of the Lehmann Brothers collapse which set off the biggest financial crash in 70 years approaches next month, let’s ask our politicians about the whole banking system, but especially about state-owned RBS: What would they have to do for you to stand up to them?´