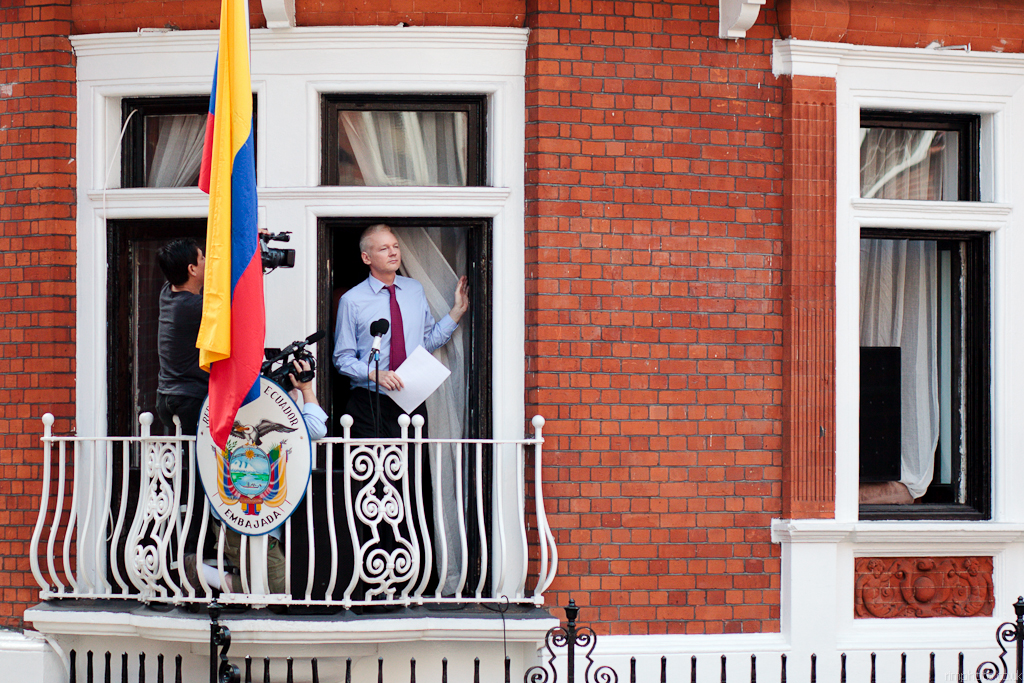 WIKILEAKS founder Julian Assange has been dragged from the Ecuadorian embassy in London [11 April] and arrested for failing to surrender himself to British courts in 2012.

Most ominously, he was taken to a London Police station and immediately re-arrested under the terms of an extradition warrant relating to the activities of his website, which publishes documents leaked from the US and other powerful states.

The issues that surround Assange’s initial decision to seek refuge in the embassy are complex and controversial.

His potential extradition to the US is not. It is an unmitigated threat to vital democratic freedoms – badly needed in our dangerous times.

Assange founded Wikileaks in 2006, at the convergance of two historical moments.

The first was the War on Terror, a military drive targeted at the Middle East as part of a strategic programme to reassert US dominance in 21st century. The Afghan and Iraq wars from 2001 and 2003 respectively were a major international shock.

The other moment was the dawn of the internet and digital age. Despite the enormous advance of information technology, the media had simply not kept pace with war developments. There was a pervasive sense that the full truth of the war and its destruction was being controlled and manipulated by states.

The year Wikileaks launched was the height of the Iraqi resistance to the US and UK occupation of the country. Just four years later, in 2010, Wikileaks released footage that showed a massacre of Iraqi civilians by US forces using a helicopter gunship.

It was only one piece of footage from masses of data leaked by Chelsea Manning, a US soldier and Iraq intelligence analyst, who is thought to have leaked over 700,000 documents, videos and diplomatic cables including the infamous ‘Iraq War Logs’ and ‘Afghan War Logs’ which unveiled the brutal reality of the west’s war drive.

Manning was quickly arrested and court marshalled in 2013 under the espionage act. She remained in prison until 2017 when she was pardoned by the outgoing President Obama.

Many leading figures of the US establishment have vowed revenge against Manning, Assange and the wider Wikileaks operation.

On 31 August 2010, Swedish police questioned Assange on two separate allegations of molestation and rape, both of which he denied.

In November, Swedish prosecutors issued an international arrest warrant so he could be questioned on suspicion of rape, sexual molestation and unlawful coercion, prompting Assange to hand himself over to police in London in December, where he was arrested.

He was bailed with help from Wikileaks supporters, but in November 2011 lost an appeal against his extradition to Sweden. He entered the Ecuadorian Embassy in London in June 2012, requesting political asylum. The next month, the Ecuadorian government granted him asylum, saying it “believes that he may become a victim of political persecution”.

Assange has maintained throughout his seven year stay in the embassy that he and Wikileaks were the victims of a “witch hunt”.

Throughout that period, lawyers for the women who levelled the allegations at Assange insisted it was they who were being denied justice.

All accusations against Assange would eventually be dropped. Sexual assault investigations were abandoned in 2015 because time ran out for charges to be made.

Lawyers for the women who made an accusation of rape against Assange protested in 2017, when Swedish prosecutors determined that “all prospects of pursuing the investigation under present circumstances are exhausted”.

There is no doubt that the women who made the accusations have been denied natural justice.

Assange continued to refuse to leave the Embassy based on his belief, he said, that he would face extradition to the US due to his Wikileaks activities.

For the longest time there was a furious debate in the media, between and among both Assange’s defenders and detractors as to whether this was a realistic possibility or simply a ruse for the Wikileaks founder to evade justice.

During his time in the embassy, Assange continued to release information, including files from the Democratic National Committee during the 2016 US Presidential elections, that some believe helped swing the election for Trump. His politics are mainly oppositional to various forces, and hard to discern. Some say he has proved a poisonous influence in political affairs, others that (even besides the serious allegations made against him) he is an egotistical and destructive personality.

But none of these matters have any bearing on whether he ought to be extradited to the US.

Of course, Assange is not being extradited to the US for anything relating to the original Swedish allegations, still less over his political orientation, but over federal charges of conspiracy to commit computer intrusion in connection with Manning.

Indeed, those charges pose stark questions for everyone pursuing the cause of greater democracy and press freedom.

Information and democracy in a dangerous world

The precedent being set is a lethal one. But this is not just about abstract principles.

Just weeks ago Manning was a free woman, campaigning on the issues raised by her long incarceration. In March she was returned to jail due to her refusal to co-operate further with secret proceedings of a grand jury investigation into Wikileaks.

With Assange facing potential extradition, to face investigation into the Manning leaks, who knows what dangers she now faces?

Nor does this end with her. We do not know, and can not know, just how large is the network of informants and whistle-blowers who have supplied Wikileaks with information. Assange’s extradition could lead to a chain reaction, with whistleblowers and journalist sources facing repercussions around the world.

President Trump’s Department of Justice justified its extradition of Assange on the accusation that he encouraged Manning to leak files, and that he also attempted to help Manning crack a password. The latter was rejected under President Obama out of fear that it would undermine press freedom. The former is standard practice in investigative journalism.

The suspicion of many journalists is that Assange is really being threatened with extradition for publishing his information. The implications for all publishers are stark.

Finally, after the Iraq and Afghanistan war logs were leaked in 2010, the veil was briefly drawn from the crimes of the world’s greatest powers. Since then, those powers have launched a determined attempt to stop the leak, and punish those who enabled it.

Democracy is needed in the 21st century, and that requires as free as possible circulation of information.

The extradition of Assange, which still must be agreed by UK courts, would surely represent a major blow to that cause.