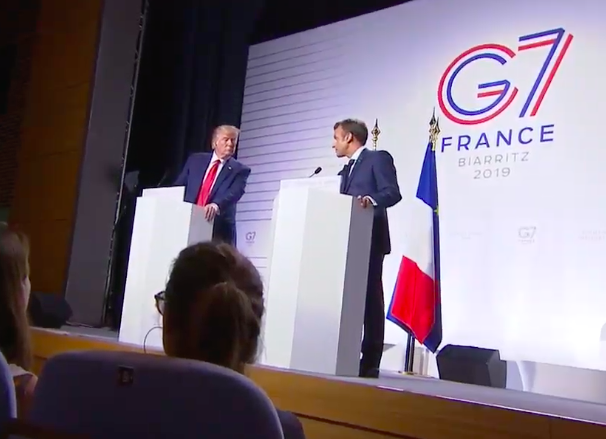 The G7 in Biarritz will not be able to hide its cataclysmic failure from history, with additional contempt surely reserved for the ultra-narcissist Trump-Johnson axis, CommonSpace editor Ben Wray finds

“WE TALKED about: ‘Where’s England, what’s happening with England, they don’t use it anymore’. It’s very interesting, we discussed that.”

These are the words of Donald Trump at the press conference to end the G7 in the French Basque Country, recollecting his discussions with UK Prime Minister Boris Johnson. We don’t know how Johnson responded – but you can imagine.

These inanities make up the high-level politics of Anglo-America in the Trump-Johnson age. The lungs of the world are burning (literally), but the priority of the UK and US is to flatter one another in one of the most narcissistic displays ever to grace the world stage.

“He really loves your country…This is the right time for Boris,” Trump added, completing a few days of unbridled boosterism of the Tory Prime Minister.

If your country and your government is being love-bombed by Trump, you’ll have to have taken leave of your senses if it doesn’t raise some serious questions about your role in the world. For this is the same Trump that has, within the last week, asked national security chiefs about the possibility of using a nuclear bomb to disrupt hurricanes, tweeted approvingly about being described as the “king of Israel” and the “second coming of God”, and got the huff with the Danish prime minister when she refused to discuss selling him Greenland. That’s the man that the Johnson government is not just following in behind, but actively pinning its hopes on for the country’s long-term future.

READ MORE: The meaning of Trump

History will not be kind to the Trump-Johnson axis, or this G7 summit. Yes, a fund was agreed to support belated government attempts to put out the fires in the Amazon, but the sum, $22 million, is so derisory as to diminish the symbolism of the act. And, with the clock ticking on climate breakdown (the one year anniversary of the IPCC report which gave us until 2030 to cut half of global emissions is nearing), there was no agreement among the G7. Nothing of substance whatsoever.

Asked about empty-chairing the Biarritz working group on climate change, Trump claimed, in Orwellian fashion, that he was “an environmentalist”, but said that he was not going to lose America’s “tremendous wealth…on dreams, on windmills which, frankly, aren’t working too well.” No other G7 leader has even bothered to admonish him for this. When future generations look back on this conference, their contempt will have few limits.

It’s the first time since 1975 that no joint communique has been agreed at such a gathering of the most powerful states. Trump’s unilateralism has put the brakes on such consensus, even if the G7 tried to put a brave face on the outcome.

Macron, as the host leader, inevitably made the running in terms of the agenda and trying to salvage something from the event. At the press conference to conclude, he sought to depict himself as overcoming great odds in Biarritz, saying there was “a lot of nervousness at the outset” and “a lot of tension and we had a lot of conflicts”, but ultimately progress had been made.

What progress? Macron identified three main things in his press conference remarks: Iran, a China-US trade deal, and a global tax on digital platforms. None of this is solid at all, but the French President does appear to have brought Trump to the table on these issues.

He could easily walk away from said table again with one tweet, but it doesn’t seem totally insignificant that after being on the brink of bombing Iran a matter of weeks ago, the US President is now willing to state that “I think eventually we’re going to make a deal with Iran”, even saying their could be a meeting between him and Iranian President Hassan Rouhani within “weeks”. Iran is undoubtedly under intense economic pressure from US sanctions, while the US doesn’t want the Persian state to accelerate uranium enrichment – there is a deal to be done, even if Trump’s national security advisor John Bolton and Israeli Prime Minister Benjamin Netanyahu won’t like it.

On China, it’s not exactly clear a lot of progress has been made, even rhetorically. Trump as usual delivered his mixed messages on the possibility of the trade war ceasing. On the one hand he said that he thought a deal would be done with General Secretary Xi Jinping, but on the other hand he reiterated his critique of the US’ long running trade deficit with the Asian powerhouse, saying “we have to balance our trading relationship, at least to an extent”. It’s unlikely that both are possible in the immediate term, but Trump is under more pressure than before due to signs of a slow down in the American economy, with a presidential election just over a year away.

On taxing global digital platforms, Macron appears to have made genuine steps forward. The French Parliament passed legislation in June for a tax on 3 per cent of global tech companies revenues in France. The French President said that the the US had agreed to develop an international tax on the global tech monopolies, and that when it does so he will remove the French legislation and reimburse the companies. Given the majority of the tech giants are American, this sounds like a bit of a coup for Macron, but the details will be important. It does show that getting things done internationally usually take unilateral moves at the national level to bring other parties to the table. Those that argue, for instance, for a global nuclear weapons ban but are opposed to unilateral disarmament could learn a thing or two from Macron’s Facebook Tax.

None of these details can disguise the big picture of the G7, which is that the world is governed by a few powerful countries that, at best, appear only faintly interested in the sustainability of human life on earth. It’s among the anti-G7 protestors in near by Bayonne, defying Macron’s authoritarian ban, that hope for the future lies.