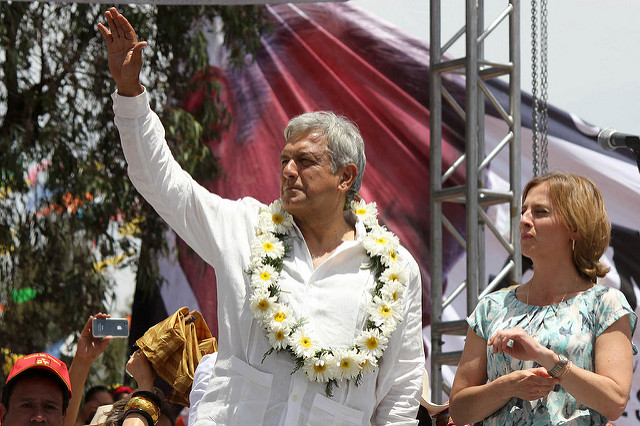 Mexico delivered a historic victory to Andrés Manuel López Obrador, who has promised to tackle the nation’s endemic corruption. But beyond the rhetoric and media distortion, what can be expected from his administration?

56 OUT OF 89 MILLION eligible voters participated in Mexico’s general election of 1 July – an unprecedented turnout that has cemented the landslide victory of the country’s new president Andrés Manuel López Obrador as not only overwhelming, but historic.

With more than half the vote, the candidate popularly known as AMLO emerged triumphant with the biggest margin in a presidential contest since Mexico’s transition to democracy.

The achievement was made all the more extraordinary due to the unusual nature of the coalition which the 64-year-old former Mexican mayor represents. Collectively known as Together We Will Make History, the electoral platform comprises the centre-left National Regeneration Movement (MORENA), the leftist Labor Party (PT) and the conservative Social Encounter Party (PES). Despite being disparate bedfellows, the parties are united by two chief factors: all seek to transform Mexico’s status quo, and none have ever been a party of government.

In light of Mexico’s electoral history, this might explain why much public perception has framed AMLO’s victory as a revolutionary moment. The legacy of the somewhat counterintuitively-named Institutional Revolutionary Party – which dominated Mexico under one-party rule from 1929 until 2000 and held links with criminal cartels – is still painful and relevant in Mexican politics, as is the disappointment felt by many when their successors – the right-wing National Action Party, or PAN – failed to challenge the country’s endemic corruption or significantly reduce poverty.

It was against this backdrop that the AMLO’s coalition was formed, registering as a political party in 2014 and quickly racking up significant victories, winning gubernational races in the states of Tabasco, Morelos, Veracruz, Mexico City and Chiapas. Nevertheless, AMLO himself is no neophyte, having previously stood for the presidency in 2006 and 2012.

Political violence saw over 130 candidates and campaign workers of various parties murdered after the campaign began in September of 2017.

But while AMLO’s momentum was fuelled by a mass-desire to alter the status quo, his campaign still had to contend with its current reality: political violence saw over 130 candidates and campaign workers of various parties murdered after the campaign began in September of 2017. Days before the election, 20,000 election ballots were stolen by armed robbers, and the vote itself was carried out under close monitoring to prevent widely-expected attempts at fraud. Despite such circumstances, the election of AMLO has been broadly accepted as legitimate by both Mexico and the international community.

However, those observing this transformative moment in Mexican politics from that international community might have encountered difficulty in getting an accurate view of AMLO and what kind of president he is likely to be, thanks to both misleading portrayals in much of the Western media and sensationalist rhetoric from AMLO’s political opponents in Mexico.

As one might expect, given the broad church of the coalition he heads, AMLO‘s policy platform is relatively moderate – its characterisation as a left-wing movement is largely attributable to its campaign pledge to roll back the widespread privatisation which has eviscerated Mexico’s water, education and energy services since the 1980s. There is also a vague hope, as yet largely unaddressed by AMLO, that his administration will de-escalate the militarised Drug War which has left over 100,000 dead since 2006.

Yet beyond bold rhetoric about governing on behalf of the nation’s humblest citizens, AMLO’s most radical immediate pledge is to reverse the previous government’s controversial education reforms, which in any other context would be an unremarkable (though popular) commitment. This stands in sharp contrast with the prevalent caricature of AMLO by excitable commentators.

Since he first stood for the presidency in 2006 on promises to “put the poor first”, AMLO’s conservative opponents have frequently likened him to the great boogeyman of oligarchical Latin American capitalism, Venezuela’s late former president Hugo Chavez – comparisons which have escalated since the beginning of the Venezuelan economic crisis. The fact that AMLO is plainly not a Bolivarian socialist has not swayed such detractors; invocations of Chavez have become a popular tactic throughout Latin America against any figure of the Left, regardless of their policy position, and were used against leftist ex-guerrilla candidate Gustavo Petro in Colombia’s presidential election only last month.

In further proof that his radical reputation is much exaggerated, AMLO has sought to calm Mexico’s bullish business community by promising that “no expropriations, no nationalisations” will take place.

Behind these fevered warnings of a crazed communist in moderate’s clothing were predictable motivations from predictable quarters: prior to the election, Mexican business leaders warned that an AMLO administration would wreck the Mexican economy, which is the second largest in Latin America, and engaged in such a flagrant propaganda campaign that the National Institute of Elections was eventually forced to intervene. Despite this, in further proof that his radical reputation is much exaggerated, AMLO has sought to calm Mexico’s bullish business community by promising that “no expropriations, no nationalisations” will take place, and that any new social programmes will be funded purely through savings from the elimination of corruption.

Many Western appraisals of the insurgent candidate have been similarly inaccurate; by running what was has been described as a ‘populist’ campaign – by virtue of the fact that AMLO, in a piece of sneaky, demagogic trickery, was promising things that were popular – there was no end of hot-take merchants ready to judge AMLO as the Mexican equivalent of Donald Trump. The difficulty with this analysis is that the two presidents have precisely nothing in common, and despite a cursory tweet of congratulations from POTUS to AMLO, it is expected that the Trump administration’s racist, authoritarian policies towards both Mexico and the migrant community will soon chill relations between the two governments.

Despite his win being generally celebrated by Western leftists, AMLO’s victory was not unanimous, either amongst the peoples of Mexico or the Mexican Left.

Despite his win being generally celebrated by Western leftists, AMLO’s victory was not unanimous, either amongst the peoples of Mexico or the Mexican Left. In 2017, Mexico’s National Indigenous Council announced the creation of the Indigenous Council of Government, a electoral platform intended to give voice to Mexico’s 525 often-disenfranchised indigenous communities, including those with close ties to the Zapatista National Liberation Army (EZLN), the left-wing revolutionary insurgency which has been engaged in both armed and political struggle with the Mexican Government since the 1990s.

The CIG announced that it would field a candidate in the 2018 election, prompting speculation that this would represent the Zapatistas’ first foray into electoral politics. While this attracted little attention outside of Mexica, AMLO – who has always had a tense relationship with the EZLN, and has publicly blamed them for his loss in the 2006 election – condemned the announcement, but this did not stop the CIG, along with the National Indiginous Congress (CNI) from promoting Maria de Jesus Patricio Martinez, or ‘Marichuy’, as their presidential candidate and campaigning on an explicitly anti-capitalist platform.

However, in May Marichuy was disqualified from the election over insufficient signatures, and it was announced that the indigenous groups backing her would enter into no alliance with any other party. While neither the CIG nor the CNI called for abstention, many indigenous communities organised spontaneous boycotts to express their anger.

AMLO may have won the attention of international admirers as well as the faith of Mexican voters, but if he is to convince those suffering the most from Mexico’s current status quo, he has considerable work to do.