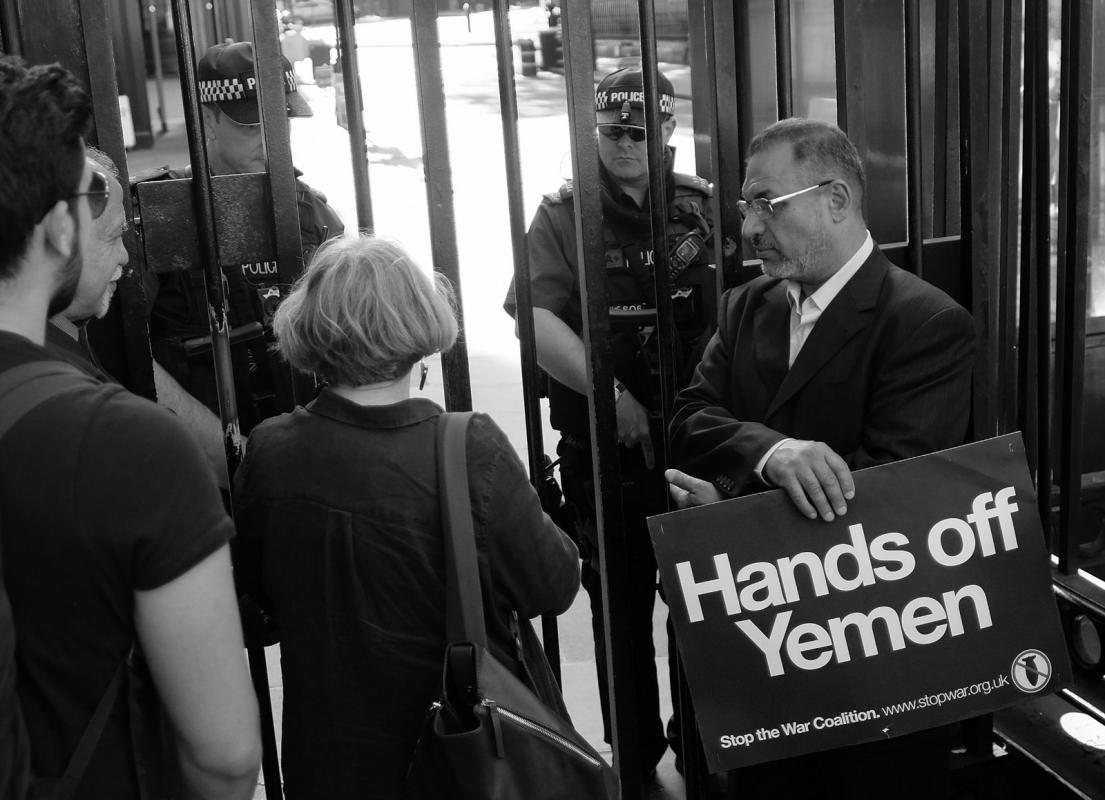 How does the UK aid the bombing campaign against Yemen, and why does the UK Government see itself as having interests in the conflict

THE DEBATE about Scottish Enterprise’s funding of Raytheon arms merchants, whose hi-tech weaponry has been used to such devastating effect in the relentless bombing of Yemen, has thrust the Yemen war back into the spotlight in Scotland.

But why is the UK state and economy so deeply involved in a conflict few in the UK know much about? And what does it mean for the future of Scottish politics.

The bloody geopolitics of the Middle East

Yemen today is the biggest humanitarian crisis in the world. Unknown thousands have been killed and millions displaced. 17 million face hunger as famine and epidemics of disease grip the strategically important country on the southern tip of the Arabian peninsula.

It is also the exemplary battlefield of two deeply intertwined processes tearing the region apart: the general destabilisation fostered by the Arab Spring and its consequences, and geopolitical competition between the Gulf dictatorships and Iran. Behind both processes lies a wider geopolitical power politics, with the US and its Western and regional allies struggling for control over a complex region.

Though the conflict has roots in Yemen’s history of imperial intrigue, which have fostered suspicion between its various regions and people’s, the latest round of violence was triggered by the collapse of the rule of Pesident Ali Abdullah Saleh, who handed over power to his deputy Abdrabbuh Mansur Hadi in 2011. Hadi’s inability to solve the country’s crisis led to his being chased out of the capital Sana’a by the predominantly shia Houthi rebel movement. Days later a coalition of Gulf and African allies, led by Saudi Arabia began bombing Yemen.

Saudi Arabia feared that the Houthi’s provided its rival, Iran, with a proxy force on its southern border. The Saudi-led alliance secured backing from Western powers including the US, Britain and France.

Between these three powers many of the tragedies of the Middle East have been authored. France and Britain the two chief post-colonial powers, and the US the new global power.

Since the end of the second world war, the US and its allies have worked to bolster Saudi Arabia with military aid and extensive business relationships. This offers the US and its allies a ready source of oil, but more importantly and powerful strategic ally to extend its influence across much of the region.

This partnership became even more mutually valuable after the Iranian revolution in 1979 toppled the US-backed dictatorship there. Since the revolution, the Western powers have struggled to contain the new Iranian state, whose resources and sphere of influence make it a serious rival to Saudi Arabia.

Yemen is the latest and most deadly flashpoint in the proxy conflict between Saudi Arabia and Iran – backed by the Western powers and Russia respectively – but also representing their own regional state interests.

As the US’ chief military and strategic ally worldwide, the UK offers its own special contributions to the Saudi led offensive against Yemen.

The UK is a major global producer of arms, particularly hi-tech weaponry like those being deployed in Yemen. The UK has sold close to £4bn in such weapons to Saudi since its campaign began in 2015. Britain’s arms sales to Saudi increased by eleven thousand per cent in the three months following the onset of bombing. These are political, and no merely commercial transactions. They are sanctioned and blessed by political authorities, which are aware of the mounting humanitarian catastrophe. Such arms deals are a major lever used by the UK state to bolster its allies in conflict, and through them to advance its own interests.

In addition to the huge shipments of arms, and the international diplomatic cover provided by the UKs friendship with Saudi, the UK also provides direct military advisers. These included senior officers in the army and RAF to advise on targeting air to ground attacks. The UK is therefore a significant player in this air based bombardment.

The UK’s active support for the destruction of Yemen, as part of a broader axis of US-led power in the Middle East has, in its turn, a special Scottish contribution.

The arms industry is a considerable part of the Scottish economy. The GMB union estimates that 13,840 Scots are directly employed at MoD sites across Scotland and 38,400 with commercial arms production. Nuclear weapons installations on the Clyde, military training facilities in the Highlands and engineering capacity across the Central Belt make Scotland important not just to UK geopolitics, but US and Nato interests as well.

The SNP has traditionally been more detached from UK foreign policy than UK-wide opposition parties. The reason for this is simple – Labour has always sought to be the government of the British state, and it has typically felt compelled to back the existing strategic and military imperatives of that state. The SNP, freed from that concern, has typically been more critical of UK foreign policy, especially when that policy has proved unpopular such as over Iraq.

But for several years, the SNP has moved itself into closer alignment with Nato and the Western powers on foreign policy, beginning with the ditching of the party’s long held anti-Nato stance in 2012. The current SNP leadership believes that this closer alignment, along with alignment to the existing structures of the British economy, will make Scottish independence a more attractive prospect for elite society in Scotland and beyond. However, Yemen – and other potential foreign policy challenges brought about by the geopolitical posturing of the West – will likely make this position increasingly difficult to maintain.