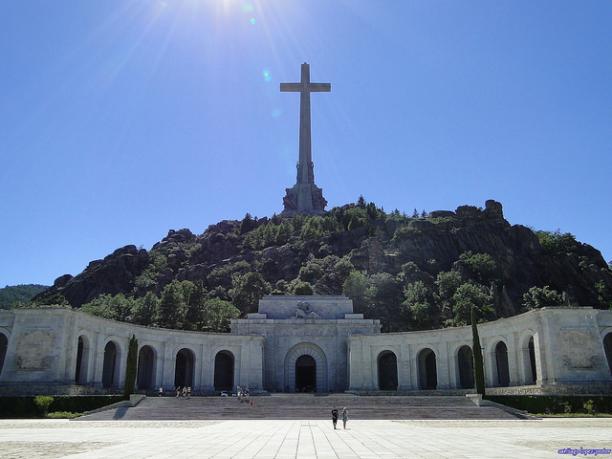 During his recent visit to Scotland, exiled former Catalan president Carles Puigdemont told CommonSpace he advocated a program of ‘de-Francoisation’ to rid Spain of those aspects of its fascist past which he argues still persist. What would such a process look like?

MOVING A BODY, in case you didn’t know, can be a tricky business.

Typically, the feat is most easily accomplished without a great deal of outside attention; if Dr Frankenstein had tried to move his chosen corpse with the same level of external focus currently placed upon the Spanish Government, him and Igor would have never even reached the cemetery gates.

The controversies which have surrounded the long-expected decision have been enough to garner international onlookers as well as cementing its relevance. Moving around a pile of bones is a matter of no small symbolism in a nation where the legacy of Francoism is far from dead.

Such a contention was yesterday articulated by Carles Puigdemont, the exiled fugitive former president of Catalonia – a nation which, deprived of self-determination, suffered more under Spanish fascism than most – during his visit to Scotland to address the Beyond Borders International Festival. Catalonia was brutally reminded of the injustices of the past in October 2017, when fresh repression was unleashed upon it by Franco’s spiritual successors, be they in Madrid or in uniform.

Speaking in April of this year following the issue of a European Arrest Warrant for the exiled Catalan minister Clara Ponsati, the Scottish lawyer and human rights advocate Aamer Anwar made a similar point: highlighting the actions of the Spanish authorities during the Catalan referendum, Anwar said: “In a civilised democracy police officers are the guardians of law and order, who take an oath to protect the public they serve. Sadly the Spanish state security forces’ behaviour on October 1st and since has been described as a return to the dark days of Francoism and what one would expect in dictatorship, rather than a modern European democracy.”

Anwar’s defence against the attempted extradition of Ponsati – which, due to the withdrawal of the EAW, we will now never get to hear in full – was reportedly framed around a demonstration that Francoism endures not just in the behaviour and rhetoric of some quarters, but in the legal and political foundations of the Spanish state.

Echoing this, Puigdemont has made allusions to a persistent Francoist strain within the Spanish state before, but rarely in such a detailed manner. Within mainstream Spanish political discourse, many – particularly amongst the recently deposed right-wing Popular Party (PP), which arguably shares certain political agendas with traditional Francoism – have dismissed such comparisons as politically motivated hyperbole. Yet such scepticism dodges the relevant question: Even if direct lines of continuity do not exist between the authoritarianism of Spain’s Francoist past and the contemporary form, what precisely is the difference between the two, when blood is shed and democracy denied?

The question is academic, not least because – as Puigdemont pointed out yesterday, and as CommonSpace has detailed before – there are many direct lines of continuity between the Franco era and today. Spain’s muddled transition to democracy – albeit in the form of a constitutional monarchy of questionable popularity – came about with the grudging support of installed Francoist politicians, who had to be persuaded to dismantle the system Franco had installed.

That the Spanish republic did not return reincarnated, as many had hoped, was in part due to such practical considerations, but also a sop to the Falangist lie, clung to by many old Spaniards none too keen to re-examine the past – or their role in it – that whatever the flaws of the Franco regime, it and the civil war which brought it to power were a necessary corrective to the dangerous socialist experiment that the republic represented.

In consequence of this cowardice, Catalonia today embodies a stronger commitment to republicanism than anywhere in Spain, and the bodies of thousands upon thousands of civil war victims remain buried more deeply than Franco ever was.

Nevertheless, the advances made – sometimes with remarkable speed, others frustratingly glacial – after the death of Franco, in spite of the frantic efforts of those regime flunkies he left behind to secure their own self-preservation, should not be ignored: the liberalisation of birth control and abortion, the explosion of a Spanish feminism for too long suppressed, the fightback against theoconservative National-Catholicism, and the unashamed expression of political views not heard since the days of the republic… Such achievements are not ornamental. But neither do they denote a job done, or an end-point reached.

Spain today is not Francoist Spain; yet Francoism, in countless ways, small or significant, persists.

It is difficult not to agree with Puigdemont’s suggestion that exhuming Franco’s corpse 43 years after his regime supposedly died with him is perhaps a little too late. Besides, as Mussolini so vividly demonstrated, the best time to have fun with a dictator’s cadaver is when it’s fresh. Yet in arguing for a concerted program of ‘de-Francoisation’, Puigdemont recognises that it will take more than symbolic gestures to eliminate Francoism once and for all.

At the opening of their conversation at Beyond Borders, the Colombian writer Óscar Guardiola-Rivera joked that his first reaction to Catalonia’s 2017 declaration of independence was to wonder what took them so long. One might suggest that, unlike so many South American nations, the Catalans sadly lacked a liberationist revolutionary as successful as Simon Bolivar, which demonstrates a wider point about any push towards the kind of de-Francoisation Puigdemont describes: simply aping the tactics of other nations will not work. The post-war Allied drive to ‘de-Nazify’ much of Europe dealt with immediate consequences, not a legacy extending over decades. Spain presents its own very particular circumstances that must be addressed.

Since the Spanish constitution, the root of so much strife within the Catalan conflict, was written in order to appease the grumblings of leftover fascists, it is disingenuous to call it an anti-fascist document, not least because the inviolability of its strictures seems at odds with so-called ‘liberal’ democracy.

As Puigdemont argued yesterday, the various governments of Catalonia have spent years attempting to find a compromise solution to their demands for further autonomy that abide by Spanish constitutional law, and had been rebuffed at every turn. And while Podemos and its activists may advocate reforming the constitution towards a more equitable federalism, they offer few assurances that a document founded on, in the words of the Catalan Marxist Pau Llonch, “capitalism as a mode of production, the monarchy, and the denial of self–determination” can be adjusted or improved so easily, particularly when its unchanging nature remains almost sacred for much of the Spanish Right.

Constitutional reform would be a necessary element of any broad push towards de-Francoisation in Spain; anything else would be merely superficial.

A recent editorial in the Guardian parsing the political and moral implications of Franco’s exhumation, while acknowledging the act as a necessary step in Spain’s “historic journey”, argued that “pointlessly refighting old wars has no value.” This might sound convincing in the Guardian’s framing, but to fight fascism in 2018 is not a matter of nostalgia-driven historical re-enactment; it is, for reasons of both principle and circumstance, entirely relevant and pressing.

What’s more, the Guardian’s view of the exhumation as being part of the “final stages” of its road away from fascism misses the point of anti-fascism. If the last few years have demonstrated anything, it is that fascism – whether in the shadows of Spanish institutions, or on the road to the White House – can emerge from new and unexpected places, however much it may garland itself in tokens of the past.

What’s more, as any anti-fascist activist could tell you: the struggle against fascism never truly ends.