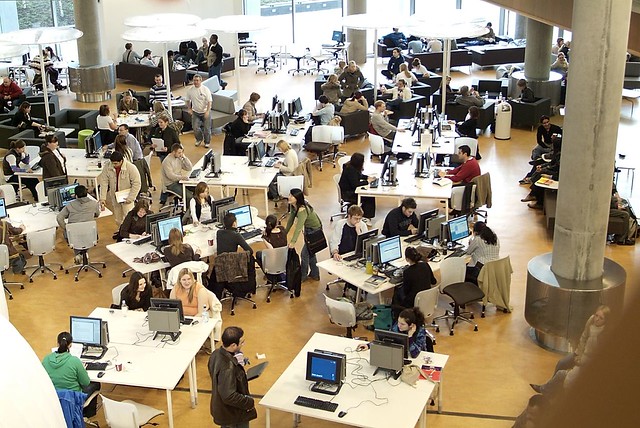 A new Scottish Productivity Index provides an insight into the Scottish economy’s major structural weaknesses which induce a low-rate of output per hour worked – tackling the problem will mean moving past failed dogmas, Ben Wray finds

Scotland’s productivity – output per hour worked – is lower than that of the UK as a whole, which on an international scale is in the bottom half of OECD productivity. 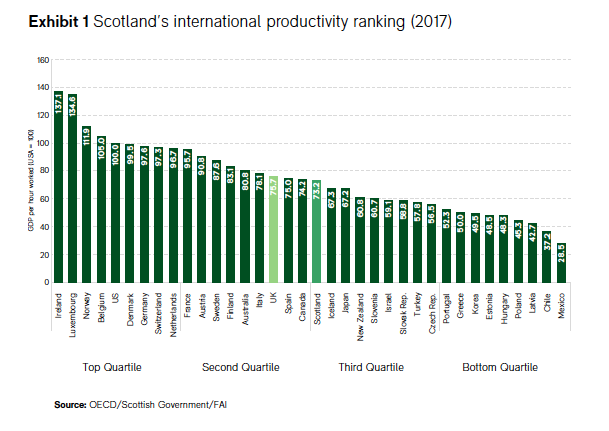 There are problems with the way productivity is calculated. Luxembourg and Ireland are at the top of the international rankings because of their massively bloated financial sectors relative to GDP, but banker ‘productivity’ is not really the same thing as the productivity of a construction worker – for example, since the banker produces debt (a liability as well as an asset), whereas the construction worker produces buildings.

Nonetheless, Scotland’s sluggish productivity has long been established and is hugely significant in terms of the output of the economy as a whole. Workers in Norway (a country which is a good comparator to Scotland) are 35 per cent more productive than their Scottish counterparts, meaning they could produce as much as we do in a five day week in just three and a quarter days.

How can we explain Scotland’s weak productivity? Politicians of all stripes have long argued that education is the key, as improving skills will lead to workers with greater capabilities to operate in ‘the global marketplace’. But as the Scottish Productivity Index shows, the number of people with Higher Education Certificates “compares well internationally and has improved over time”, with Scotland having the highest rate of Higher Ed graduates of any country in the UK. It clearly hasn’t solved the productivity puzzle.

While skills are undoubtedly important, a highly skilled population working in businesses which don’t make the best use of their skills is not going to lead to higher productivity. As Monojit Chatterji, Economics professor at the University of Dundee, wrote on CommonSpace: “Productivity increases occur when both the worker and the machine(s) she works with improve.” It’s time for the focus of productivity analysis to shift to the business side of the equation.

As the Productivity Index shows, Scotland fares extremely badly when it comes to business investment.

CBI Scotland and KPMG propose “tax incentives” to encourage greater investment levels and to “prioritise investment in management and leadership”. This is both a misunderstanding of the problem, and a solution which not only will grow inequality at the expense of public sector revenue, but is also unlikely to work.

Chatterji again: “[Improving productivity] requires investment in physical and human capital (education) preferably in a coordinated way. The conditions under which the market can achieve this coordinated increase in different kinds of investment are rather unlikely. There are many reasons to suspect that under market rules, there will be an investment “hold up”. Businesses will need to be sure of high future demand and low borrowing costs. Workers will need to be sure that the skills they invest in today will still be important in the future. And both sides will need to know that the extra output generated jointly by their respective investment efforts will be shared in an equitable way. This is a big ask for the market.

“A social long term contract is the way forward. Since 2008, the cost of borrowing in the UK has been at an all-time low; and despite that investment in new technology has been sluggish. And consequently productivity has fallen well below its trend in 2008. Clearly exclusive reliance on the market has not worked.”

What are the barriers to such a social long term contract? First of all, a high number of companies are not owned here. Scotland has the lowest rate of domestic ownership of businesses of any region in the UK, with one-third of companies owned overseas. This makes it difficult to introduce changes to company law (e.g. greater worker democracy), tax and regulation which will induce higher rates of business investment.

Secondly, Scotland is predominantly a services economy, dominated by low paid jobs in retail, supermarkets and call centres. As the graph below shows, these are the sectors where productivity is lowest (see ‘distribution, accommodation and food services’). 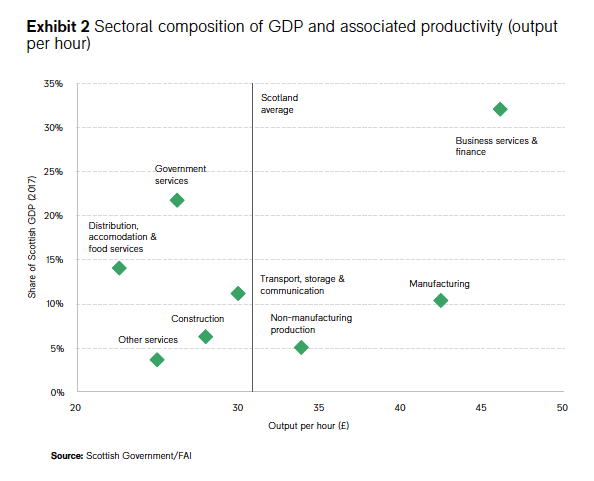 Third, the expensiveness of land and property means that it can often be more profitable to sit on land and/or extract rent from it rather than to do something productive with it. The huge growth in wealth inequality over the past 20 years has only exacerbated this trend towards accumulation via asset ownership rather than investment. A paper for the Scottish Land Commission by economist Laurie Macfarlane advocated land taxes as a way of tackling Scotland’s productivity problem: “Reducing the ability to make windfall gains from rising land prices would shift investment patterns away from existing property and towards productive assets – stimulating growth and productivity.”

Fourth, businesses are more likely to invest if the state is also investing, boosting demand in the private sector and establishing the physical and digital infrastructure that makes business investment attractive. The UK and Scotland have extremely low rates of public sector investment and public sector R&D compared to the EU average, something that the Scottish Government has sought to address but only within the limited fiscal and monetary powers it has available to it.

A foreign-owned economy, skewed towards low-paid service jobs, with high land values and weak public investment. It’s these structural weaknesses which foster the climate of stagnating productivity the Scottish economy finds itself in, and which needs to be tackled if a new model is to emerge which moves beyond the dogma that more educated citizens operating in ‘the global marketplace’ will lead to higher productivity.