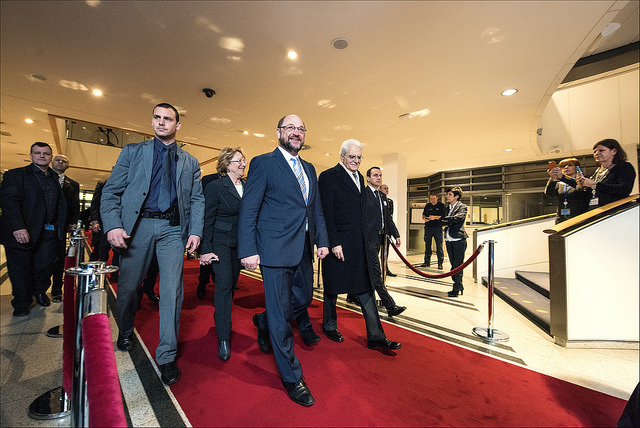 The scuppering of an unlikely populist coalition has not only provoked political chaos in Italy, but may lead to a fresh finance crisis and the potential destabilisation of the European Union.

ITALY, at the time of writing, has no government.

The leader of one of its most successful political parties has questioned whether the country is still a democracy, calls are growing for the president to be impeached, national sovereignty appears to be on a collision course with the European Union and market uncertainty could be the prelude to a full-blown financial crisis.

The roots of the crisis can be found in strange political bedfellows, the intricacies of the Italian constitution, the limitations of democracy under standing Eurozone treaties, and competing attempts to form a new government, none of which have sufficient authority to stand on their own.

Italy has technically been without a government since March, when elections failed to yield a majority for any single party, resulting in protracted negotiations between the anti-establishment Five Star Movement and the far-right League parties to form a workable coalition.

However, the possibility of such a collaboration – which might have seen M5S candidate Giuseppe Conte become prime minister – was stalled when Italian president Sergio Mattarella vetoed the two parties’ choice for finance minister, the Sardinian academic, economist and former minister Paolo Savona. As a result of Savona’s dismissal by Mattarella, Conte has stepped down in protest.

Savona’s well-established Euroscepticism is believed to put in his conflict with Italy’s pro-EU political elite, making him an unacceptable choice. Yet as Lozenzo Marsili recently noted on Al Jazeera, Mattarella “had no qualms about accepting Matteo Salvini, the leader of the League, as an interior minister, despite his calls for the deportation of up to half a million migrants and refugees”. For the office of the Italian presidency, there are obviously very specific criteria for what counts as beyond the pale.

In place of Savona, Mattarella has appointed former International Monetary Fund official Carlo Cottarelli – known in Italy as “Mr Scissors”, due to his propensity for cutting public spending – as an interim prime minister.

M5S leader Luigi Di Maio was withering in his condemnation of the appointment: “In this country you can be a condemned criminal, a tax fraud convict, under investigation for corruption and be a minister… but if you criticise Europe, you cannot be a finance minister”.

Furthermore, Mattarella faces increasing criticism over his reading of the Italian constitution, Article 92 of which specifies that “the President of the Republic appoints the President of the Council of Ministers and, on his proposal, the Ministers”. In simple terms, this means that while the function of appointing the cabinet falls to the president, it is the prime minister that selects them.

Those angered by Mattarella’s recent actions view his conduct as being outwith the authority of his office and a divergence from the largely neutral role he should play in these matters. However, some constitutional scholars interpret Article 92 as giving the president the right not to appoint ministers at his discretion.

This is backed by some precedent: in 2014, Giorgio Napolitano, the preceding president, opposed the Democratic Party’s choice for justice minister on what many believed were political grounds, while a League political appointee was turned down in 2001 for legal reasons, just as Silvio Berlusconi was rebuffed in 1994 when he attempted to install his personal lawyer in the Ministry of Justice in 1994.

None of these instances led to anything comparable to the present crisis, due to the fact that alternative nominees were put forward. However, M5S and the League have held firm, and as a result, the interim government formed at Mattarella’s decree will need to be approved by the Italian Chamber of Deputies and the Senate.

This is unlikely, as M5S and the League hold a majority of seats in both houses, and are widely expected to vote against Cottarelli’s temporary cabinet. Should that occur, Cottarelli has stated that new elections will be held after August. This could also breathing room for a fresh round of negotiations to take place, but the spectacle of an unpopular, unelected cabinet holding forth for several months in defiance of the dominant Italian polity could further intensify the crisis.

The wider problem the Italian situation poses for the EU is even more complex. Mattarella’s actions have created the impression that Italian democracy is of secondary concern to the requirements of EU member-states; given that new elections are now a virtual certainty, any future political contest will almost certainly be framed as a battle between the authority of Brussels and Italian sovereignty. The possibility grows that it could also become an unofficial plebiscite on the Euro, which Italy plays a large part in underpinning.

The EU shows little indication of changing the course set by its previous collisions with inconvenient or recalcitrant national governments. In Italy itself, in 2011, president Giorgio Napolitano appointed former Goldman Sachs banker Mario Monti as a lifetime senator before offering him the chance to form a government, which he duly filled with like-minded, unelected technocrats, with no word of objection from Brussels.

The controversies and delays that defined the unsteady progress of the Lisbon Treaty further embedded this narrative, and while M5S and the League – should they successfully form a government – could set out to renegotiate Italy’s settlement with the EU, such a strategy proved unsuccessful when the newly-elected Greek government of Syriza attempted to do much the same thing. The plight of Greece as a national debtor prison was handed down by the Troika, despite the uncompromising defiance of the Oxi referendum result.

Although Italy’s economy is not as chaotic as that of Greece at the height of its own crisis, it has remained anaemic for years. Ironically, one of the suspected reasons behind Mattarella’s rebuffing of Savona was to avoid just such a confrontation-driven financial crisis; now, in the wake of the growing pandemonium, markets are taking fright.

The EU looks unlikely to falter; despite adopting diplomatic tones, German chancellor Angela Merkel has stated that she will work with whatever government Italy ends up with, provided its economic policy is determined by Eurozone rules. However, such sentiments were walked back somewhat by European Council president Donald Tusk, who intervened following remarks from EU Budget Commissioner Gunther Oettinger, who outraged many when he suggested that the current chaos would teach Italians a lesson about the dangers of voting for anti-establishment populists.

Tusk responded hastily: “My appeal to all EU institutions: please respect the voters. We are there to serve them, not to lecture them.”

Echoing Tusk’s plea, European Commission chief Jean-Claude Juncker said: “Regardless of which political party may be in power, Italy is a founding member of the European Union that has contributed immensely to European integration.

“The commission is ready to work with Italy with responsibility and mutual respect. Italy deserves respect.”

Kind words, no doubt, which may or may not be sincere. But for the EU to put such respect into practice – particularly if it requires more sacrifices than it has been prepared to offer other, more desperate nations – may be more difficult to achieve.