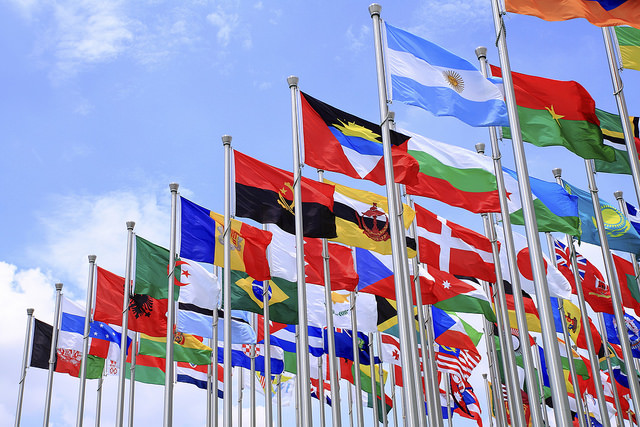 While the UK Government has defended the legality of its latest intervention against the Syrian state, it has offered no response to the multiple, specific arguments that such action was illegal

IN THE AFTERMATH of the joint US/UK/French military strikes against targets within Syria last week – intended, according to Prime Minister Theresa May, to “degrade” the ability of the government of Bashar al-Assad to make use of chemical weapons – the UK Government has defended its actions as entirely legal, despite mounting evidence to the contrary.

So far, the UK Government’s key defence of the legality of the military actions undertaken against Syrian targets this past week has been the precedent set by earlier interventions – notably those by the United States in 2017, which many have argued were also illegal under US law – and the legal advice provided to the government by UK attorney general Jeremy Wright, a summary of which was released the day after the strikes had taken place.

The attorney general stated that the use of force could be justified in law as necessary to prevent future humanitarian catastrophe, and told Theresa May that the Syrian Government is guilty of a “serious crime of international concern, as a breach of the customary international law prohibition on the use of chemical weapons, and amounts to a war crime and a crime against humanity”.

In light of this, Wright argued, the UK had the legal right “to take measures in order to alleviate overwhelming humanitarian suffering”.

It may be significant that, other than Wright, no major legal scholar has made a public defence of the legality of the Syrian strikes; similarly, no legal reprisals against the nations involved in the strikes has thus far been mooted by the international community.

“International law does not permit individual states to use force on the territory of other states in order to pursue humanitarian ends determined by those states.” Professor of public international law Dapo Akande

However, Wright’s argument offer no direct counters to the accusations articulated in the legal advice commissioned by the Labour Party from Dapo Akande, an Oxford professor of public international law.

In the advice, published by the Labour Party in the aftermath of the Syrian strikes and ahead of the 16 April House of Commons debate on the UK Government’s participation in the intervention, Akande wrote: “International law does not permit individual states to use force on the territory of other states in order to pursue humanitarian ends determined by those states.”

Citing the United Nations Charter, Akande notes that the UN prohibits the threat or use of armed force by states against other states, a position backed up by the International Criminal Court, which has declared this prohibition as an underlying principle of international law: simply put, international law cannot function if the threat of unilateral military aggression remains a constant possibility.

Akande acknowledges that the UN Charters allows for two specific exceptions to this prohibition – to act in “collective self-defence”, or as part of an action authorised by the UN Security Council in the interests of maintaining “international peace and security”. In addition to these qualified circumstances, a further exception may be made if the military action undertaken occurs with the consent of the government in the nation being targeted.

“There is neither a general state practice of humanitarian intervention nor is any such practice accepted as law.” Professor of public international law Dapo Akande

Akande highlights the fact that the UK Government has taken advantage of these three legal justifications for its prior military actions against ISIS in Syria, against ISIS in Iraq, and during the Libyan civil war. However, none of these legal arguments can apply in the case of this month’s strikes against Syria, which were not authorised by the UN Security Council and were not at the invitation of the Syrian Government, which itself posed no apparent or credible threat to the collective self-defence of the UK, the US or France.

Akande addresses the unique argument put forward by the UK Government in the wake of the Syrian strikes – that such action was necessary to alleviate overwhelming humanitarian suffering – and judges that “there is very little support by states for this legal position”.

Elaborating, Akande explains further in his legal advice that the argument pursued by the UK Government essentially amounts to the writing on a unilateral policy on international action, despite this policy demanding the Syrian state abide by international laws and norms.

The UK Government, Akande points out, is “one of only a handful” of states which interpret international law as providing a right for individual states to conduct humanitarian intervention; neither France nor the US have advanced such a view. With that in mind, the governments of neither country have put forward any legal justification for the recent strikes.

“We reject the so-called ‘right’ of humanitarian intervention, which has no legal basis in the United Nations Charter.” Declaration of the South Summit

Akande cites the fact that all European states with the exceptions of Belgium and Denmark have refused to endorse a legal principle permitting intervention on humanitarian grounds, with a large number of them explicitly rejecting such a position. Akande points to the ‘Declaration of the South Summit’, issued in April 2000 by the Group of 77 (in actuality, over 130 nation-states), declaring: “We reject the so-called ‘right’ of humanitarian intervention, which has no legal basis in the United Nations Charter or in the general principles of international law.”

These examples, at the very least, demonstrate that there is no ‘opinio juris’ – a much-debated notion in international law, which hinges of the acceptance of individual states that they are bound by a collective obligation to follow a law or convention – justifying a doctrine of humanitarian intervention, and in particular not one that can be pursued unilaterally.

Akande also criticised the UK Government’s position from a different angle, arguing that even if such a doctrine existed uncontested and accepted internationally, the strikes against Syria would not fulfil the tests set out by the UK Government to justify its own position.

Sufficient proof of the alleged atrocities involving chemical weapons has not yet been provided by investigators from the Organisation for the Prohibition of Chemical Weapons (OPCW); it has not been accepted universally within the international community that “extreme humanitarian distress” has taken place in Syria, and it is not immediately clear that the latest intervention would alleviate that distress, even if its nature was agreed upon.

While a few of Akande’s points were briefly addressed in parliament by Theresa May in response to UK Labour leader Jeremy Corbyn’s questioning – such as her claim that OPCW investigators could not carry out their work, due to delays and disinformation from the Syrian Government – little else has been put forward by the UK Government to undermine Akande’s legal conclusions.

Additionally, outside of the UK Government and across Western politics and media, there has been noticeably little defence of the legality of the strikes, even from its most enthusiastic proponents.

Anne-Marie Slaughter, who served as director of policy planning under the administration of former US President Barack Obama, acknowledged the illegality of the US/UK/French intervention even while defending it on Twitter, writing: “It [the strikes against Syria] will not stop the war nor save the Syrian people from many other horrors. It is illegal under international law. But it at least draws a line somewhere and says enough.”

The legality of the Syrian strikes appears even more dubious in the context of the American constitution, which sets out the military decisions a US president is and is not empowered to make.

“To be legal, the strike would have to be authorized either by some act of Congress or by the president’s own powers under Article II of the Constitution.” Constitutional lawyer Stephen Vladeck

Asked by the American news and analysis website Vox whether the latest strikes were legal under US law, Stephen Vladeck, a constitutional lawyer at the University of Texas, answered: “Almost certainly not.”

Elaborating, Vladeck continued: “To be legal, the strike would have to be authorized either by some act of Congress or by the President’s own powers under Article II of the Constitution. And neither of those conditions appears to have been met here.”

“It is an unjustified assault on a sovereign country.” Joint-statement from Syrian Christian leaders

The Syrian strikes have also been condemned as illegal by Syrian Christian leaders, whose persecution by the Syrian Government was cited by MPs in defence of the intervention during Monday’s House of Commons debate on the matter.

Defenders of this month’s Western intervention in Syria have largely focused on the situation’s moral dimensions, frequently arguing that there is a cost to inaction as well as action; during the Commons debate on 16 April, some even cited with pride prior military actions taken by the UK without United Nations approval, but which they believed were nonetheless justified.

However, others have responded that to focus on the arguable merits of a military intervention’s outcome, rather than the legal basis for undertaking it at all, threatens the very fabric of international law itself.

Writing in Current Affairs magazine, the American journalist and editor Nathan J. Robinson wrote on 14 April: “Creating a viable and meaningful set of international legal standards is crucial to ensuring a future for the human species, and when countries erode the precious and unstable existing compact, whether Syria, the United States, Britain, France, Russia, or Israel, and embrace the concept of ‘illegal but legitimate,’ they threaten to undo all of the progress that has been made toward ensuring a lasting world peace.”

Echoing Robinson’s argument, Marc Weller, a professor of International Law at the University of Cambridge and editor of the Oxford University Press Handbook on the Use of Force in International Law, argued on the BBC website: “Legally, the claim to enforce international law on chemical weapons by violent means would return the world to the era before the advent of the UN Charter.”