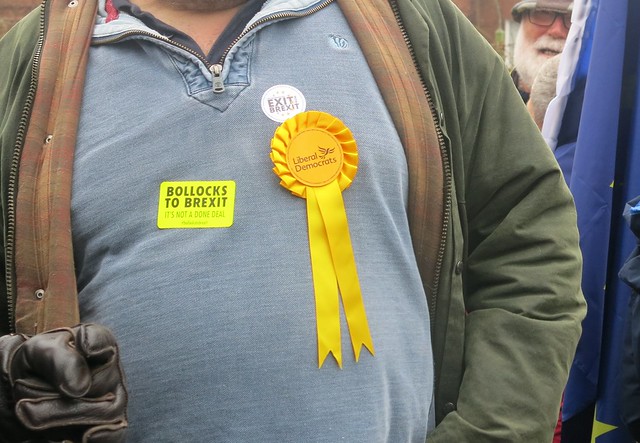 The Lib Dems have decided they are not that bothered about a People’s Vote after all, now standing on a ‘Revoke and Remain’ ticket in the General Election. The implications for a future independence referendum if such a position ever comes to fruition would be stark, Ben Wray finds.

A GENERAL ELECTION has been stalled by the opposition until after 31 October. But in November, it’s on. With no majority in parliament, the Tories cannot continue to govern for long, however much the opposition (perversely) may want the agony to continue.

So how are the Remain parties shaping up for that election? What’s their offer? Jeremy Corbyn told the TUC today that his plan, for a second EU referendum after winning a General Election, would include a “credible Leave option”. Of course, credibility is in the eye of the beholder – it’s highly unlikely a substantial number of Leave voters are going to treat any Deal negotiated by Corbyn – who’s shadow cabinet already backs Remain, and who hasn’t ruled out voting Remain against a Deal he himself has negotiated with Brussels – as credible.

Labour have picked the Remain side in this constitutional showdown, but Labour Leave voters can take a crumb of comfort in the fact that Corbyn is at least interested in where they put the cross in their ballot box in 2016. Corbyn still wants to make Leave voters feel like they will be part of the democratic process if Labour come to power. The Lib Dems, on the otherhand, want to rip up the 2016 referendum altogether and forget it ever happened.

New Lib Dem leader Jo Swinson announced on Monday [9 August] that a vote for the Liberals in the upcoming election was a vote for revoking article 50 and…that’s it. Just revoke and be done with it.

The @LibDems are the strongest Remain party, and we’ve long argued for a #PeoplesVote. But if we have a general election before a PV, my position is clear. A Liberal Democrat majority government would revoke A50 and #StopBrexit https://t.co/4rbJKoAh1r

It does raise a lot of questions about just how sincere the party has been in campaigning for a People’s Vote over the past three years. They told us that democracy means people are allowed to change their mind, that you can’t be cancelling democracy by asking people to vote again, that a confirmatory vote following Brexit negotiations was the only democratic way to conclude the Brexit process. Was all of that just a ruse? Or have they changed their minds? If so, do they no longer believe democracy is essential to resolve this constitutional crisis?

It will be interesting to see if Swinson is pressed for answers on these questions over the course of the General Election campaign. It seems more than a tad coincidental that she has shifted the party’s policy after Corbyn had clearly moved into the leadership of the People’s Vote constituency, at least outside of Scotland.

Thus the Lib Dems electoral prospects rested on finding a new point of division within the Remain part of the country. The obvious place to go is purity-Remain, where Leavers are cast aside entirely, stripped of any opportunity for their vote to be meaningful. Leave won in the country, but Remain wins in the parliament. And parliament trumps referenda – so the 52 per cent can just pipe down. That’s the logic of Revoke.

The new position is surely not without electoral calculation. It’s quite plausible that focus groups have found a substantial number of ‘Revoke and Remain’ voters out there. Those that, like No Dealers, just want the whole thing over with by the quickest route possible – as long as it is the way they voted. Cynical? Yes. Reactionary? Yes. Populist? Yes. But whoever thought the ‘bollocks to Brexit’ party was anything else?

How will the SNP respond? It took awhile for Nicola Sturgeon to become a full convert to a second UK-wide EU referendum, before finally taking up the mantle with gusto, even addressing London People’s Vote marches while being unwilling to do so for independence ones of similar proportional size north of the border. That shift opened up the possibility of a confirmatory vote following a Yes in any future independence referendum, something which has been advocated by leading Remainers, including former Lib Dem leader Vince Cable. An SNP ‘Revoke’ position would have even starker implications for indyref2.

SNP MPs backed Joanna Cherry’s motion during the indicative votes at the end of March which proposed that Revoke be the default option where the UK not to have secured a deal by the end of the Article 50 period, rather than No Deal (which is currently the law). That doesn’t mean that the SNP would be happy to support abandoning the democratic process over EU membership altogether, but it does raise a question about what they would like to see happen following revocation in those circumstances.

So far, there has been no response from the SNP leadership to Swinson’s new Revoke policy. That’s perfectly understandable given the circumstances, but it surely will come up during the General Election campaign as parties fight in Scotland to represent the majority Remain vote. The party’s response will be telling.

It would surely be naive and short-sighted in the extreme if Sturgeon and co decided that giving hardcore unionists a plausible ‘get out of jail free card’ following a Yes vote is a price worth paying for joining Swinson on a ‘Revoke and Remain’ ticket. Ensuring that Scotland’s democratic rights, and its majority Remain vote in 2016, is respected is very different from abandoning any democratic process over the UK constitutional crisis altogether.