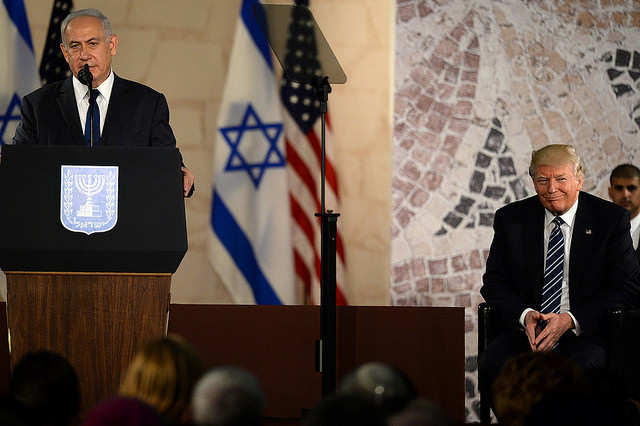 The US recognition of Israeli sovereignty over the Golan Heights has been interpreted by Benjamin Netanyahu as a refutation of international law, Sean Bell finds

THE annual conference of the American Israel Public Affairs Committee (AIPAC) has, in the past few days, garnered much media attention and breathless commentary, in both the US and beyond.

This is not unusual, despite the conference seldom delivering anything surprising. Apart from being a lavish, self-congratulatory affair, reliably attended by those many American politicians keen to display their devotion to Israel with the maximum degree of publicity, it is arguably a unique spectacle in US politics. Imagine a similar assembly in which influential and well-connected Washingtonians gathered to publicly pledge their uncritical support for a foreign power, with American crowds cheering as Vladimir Putin or Nicolas Maduro appeared onscreen, Big Brother-like, to offer some chummy words of thanks to their Stateside boosters, and the inherent oddity of AIPAC becomes apparent.

Recent events have thrown even greater focus upon the year’s premier event for the US Israel lobby. Mere weeks before a tight Israeli election, Israeli Prime Minister Benjamin Netanyahu – already facing multiple accusations of corruption – has forged a merger between extremist far-right parties and made common cause with those intensely comfortable with being identified as fascists. A retweeted condemnation from the American Jewish Committee, identifying one of the parties as “racist and reprehensible”, initially indicated that AIPAC might join those erstwhile supporters of Netanyahu and Israel enraged by the development. That didn’t last long; the next day, AIPAC were “honoured to announce” Netanyahu as a speaker at its 2019 conference.

READ MORE: Explainer: The Golan Heights – what is it and who does it belong to?

Meanwhile, a number of Democratic candidates for the 2020 presidential election were notable in their absence, yet there was no shortage of high-profile representatives of the party, all of them falling over themselves to clumsily throw shade on some of those left-wing freshman Democrats who have dared to criticise the US-Israel relationship, and in particular the popular and much-slandered Congresswoman Ilhan Omar, who remains a useful hate figure for the Israel lobby and a sore spot for the Democratic leadership.

The bitterness of characters such as House Speaker Nancy Pelosi and Majority Leader Steny Hoyer is understandable, considering that the party establishment’s recent attempt to throw her under the bus backfired so spectacularly that resentment of Omar has become a rare example of genuine bipartisanship in the era of Trump. Though never mentioning her by name, Omar even elicited condemnation from Netanyahu when his presence was finally beamed in. The leader of a state to which the US Senate guaranteed a $38 billion defence aid package over the next decade took pains to assure all that the relationship between the US and Israel had absolutely nothing to do with money.

Predictably, such ghoulish pageantry dominated the bulk of the media coverage; the unbowed and unapologetic Omar makes for good copy, and there are many of her detractors who have their own reasons for not letting the story die. However, such nonsense was more than just a continuation of efforts to draw an equivalency between criticism of Israeli influence over American politics and antisemitism; it also distracted from developments which may have more far-reaching consequences.

True, the United States Government’s recent decision to recognise Israeli sovereignty over the disputed Golan Heights – a claim not recognised by any other country in the world, and described by the United Nations as “null and void” under international law – did not exactly happen in secret. By signing a presidential proclamation on 25 March formally recognising Israel’s right to what international law regards as Syrian territory, Trump has – with typical lack of subtlety – simultaneously intervened in Israel’s upcoming election on behalf of perhaps his biggest international supporter, paved the way for future Israeli annexations in the West Bank, raised the possibility of fresh conflict in Syria, and made a play for redefining support for Israel as exclusively Republican turf, in the hopes of winning both Jewish and evangelical Christian voters to the GOP camp.

Committing performative outrages on the international stage is hardly unexpected from the Trump administration, particularly in light of its earlier recognition of Jerusalem as Israel’s capital and its decision to relocate the US embassy to Israel. Given the condemnation that greeted the Golan Heights proclamation from many nations, it is unlikely this will represent a major geopolitical shift. What may be more concerning is the precedent Netanyahu and his government evidently believe has been set, and which may be acted upon in future.

While attending the Golan signing ceremony on Monday (bringing with him a box of wine produced in the seized territory as a gift for President Trump – perhaps the unclassiest spoil of empire yet produced), Netanyahu took it upon himself to redefine a international law as he saw fit. While it has been accepted for decades that territory seized during wartime must be returned at the end of hostilities, the Israeli prime minister made it clear that, as far as he was concerned, the rules have changed.

“There is a very important principle in international life,” said Netanyahu. “When you start wars of aggression, you lose territory, do not come and claim it afterwards. It belongs to us.” The point was re-emphasised when he landed in Ben-Gurion airport the next day, when the prime minister told press: “Everyone says you can’t hold an occupied territory, but this proves you can. If occupied in a defensive war, then it’s ours.”

The fact that this wild reinterpretation of principles which have kept the world spinning since the end of the Second World War would not stand up in court is almost the least terrifying point. Every war and military action Israel has ever engaged in has been described as defensive; from the Six Day War to the War of Attrition, the Yom Kippur War to the conflicts in Lebanon, the Gaza War to the numerous military offensives and reprisals against Palestinian intifadas – all have been justified, one way or another, as being necessary to preserve Israel’s security and continued existence.

That Israel claims to enjoy sovereignty over the territories it has gained through such conflicts is also nothing new, but the fact that its government evidently believes such claims now exist in accordance with international law, rather than in defiance of it, not only threatens further destabilisation in the Middle East, but serves as a potentially catastrophic provocation to any foreign power that accepts the premise. If Israel can expand its sphere of control through conquest and military force, why can’t other countries do the same?

The bulwark against this, as ever, is the nebulous concept of Israeli exceptionalism – the same understanding that led to Trump’s abandonment of the Iranian nuclear deal while Israel’s barely-secret nuclear arsenal remains untouched – and fear of war in the Middle East on a scale beyond nightmare. The former has never been universally accepted, only grudgingly tolerated; the latter, as this century has thus far demonstrated, has long since ceased to trouble the corridors of Western power. Unless the world is prepared to show Netanyahu that international law is not a reality from which he can disengage forever, who knows what comes next?

Picture courtesy of The Israeli Ministry of Foreign Affairs