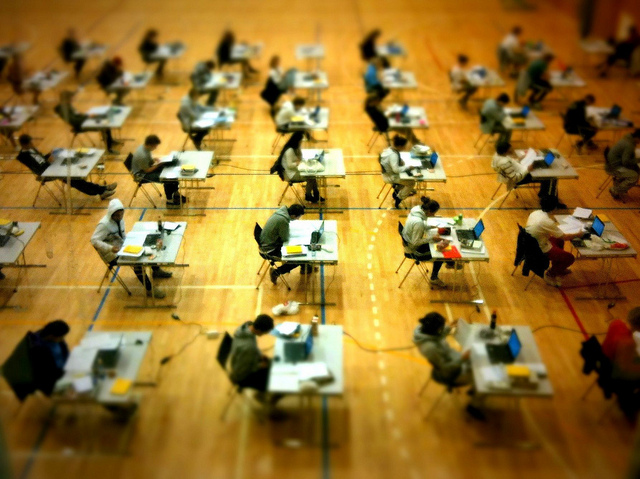 CommonSpace editor Ben Wray looks at new figures on mental ill-health for pupils and teachers, and finds excessive exams is just the tip of the iceberg when it comes to the 20th century thinking which dominates the school system

A NEW survey by the Mental Health Foundation Scotland has found that more than half (51 per cent) of teachers feel the job has exacerbated existing mental health conditions or caused them to develop new mental health issues like depression and anxiety.

Meanwhile, referrals to NHS Child and and Adolescent Mental Health Services (CAMHS) in Scotland are up 20 per cent in just the past three years.

These statistics reveal a real crisis – school, supposed to be a place of personal development and learning, appears to be a breeding ground for stress, anxiety and depression.

We should sound two notes of caution. Firstly, children and adults knowledge and openness about mental health has increased markedly in recent years, and thus these numbers will partly reflect increased awareness and understanding of what could have previously been ignored or thought to be a different problem. Secondly, just as schools should not take full responsibility for the attainment gap, it would be totally wrong to lay the blame for poor mental health squarely at the door of the schooling system, when there is a general crisis of mental health in societies which are struggling to cope with the alienation and atomisation of the neoliberal, digitised age we live in.

READ MORE – Doaa Shabbir: If educational progress is not about uplifting a whole generation, then it is not progress at all

Nonetheless, this should be a wake up call for those who believe that Scotland’s school system basically requires a tweak here or there, and not a radical re-think. Schools should be at the forefront of tackling the mental health crisis, preparing young people mentally for life in the modern world, not places where all of the problems of our economy and society are exacerbated in a hothouse of stress and tension.

As school student Doaa Shabbir pointed out in an excellent article on this site about schooling and educational progress, South Korea may possess the highest level of 25 to 34 year old’s with tertiary education, and be seen as “a model for the promotion of ambition in the brightest and most capable youths”, with 35.5 per cent of families spending thousands of pounds to send 2 year old’s to private tuition centres, but this does “nothing for the declining levels of family savings and increasing levels of debt in South Korea, the increasing divorce rates, and the country’s devastating suicide rates, being the highest of the developed world”.

The problem of excessive exams and grading within the school system – an obvious driver of stress and anxiety for students and teachers – is just the tip of the iceberg. We have a 20th century approach to school education in a 21st century world. As George Monbiot points out in this excellent video, school (and higher education) give almost exclusive weight to a pupil’s ability to read, write and memorise, over other equally important forms of learning and skills, like listening, communicating, creating, making, thinking conceptually, drawing, problem solving, and so forth.

The final point Monbiot makes is perhaps the most important one – automation will increasingly make much of the technical knowledge we learn at school redundant. Indeed, the key for humans in the age of information abundance will not be the accumulation of knowledge, which robots and computers can also accumulate, but the ability to know what to do with the knowledge they have, to do the social and creative things that robots can’t: empathise, negotiate, philosophise, prioritise, deliberate, care, communicate, and so forth.

This is the future of education: to create rounded citizens capable of critically thinking about the world around them. This should prioritise multi-disciplinary, project based learning; it should prioritise meeting and engaging different demographics of people who they may not come into contact with in their family and friends’ social circles; it should prioritise getting out and seeing the world, understanding nature; and, finally, it should absolutely prioritise – above, or even in place of, exams, grades and qualifications – the personal development of each pupil, so that they learn respect, dignity, solidarity, community, self-discipline and so forth.

This approach to schools would be a much more difficult change for teachers and parents than it would be for pupils, who can adapt and change quickly. Teachers who have been in the system for decades are likely to find it difficult to accept there is a better way to do things, while pushy parents will want their child to be assessed competitively. There is also the pressure that comes from international assessment systems like PESA, which the media (and voters) tend to judge politician’s performance against.

But there is surely no doubt that the looser, less pressurised, more creative approach I have outlined above (some of which are outlined in more detail here) would also be far better for the mental health of pupils and teachers. The latest figures show teacher training in Scotland is on the rise, though still behind the government’s targets to eradicate the teacher shortage – how many more teachers would be attracted into the industry if they thought project based, outdoors learning and an approach which valued all forms of intelligence was emphasised?

The Scottish Budget on Wednesday [12 December] will have a major bearing on the future of the dispute between the Scottish Government and teachers over pay. That is a crucial issue when it comes to making teachers feel like they are valued and respected, and attracting people to the industry. Class sizes are too big and the only answer to that is more funding for more teachers. But the gulf between what schooling could be and what it is can’t just be counted in pounds and pence – a different concept of school is needed.