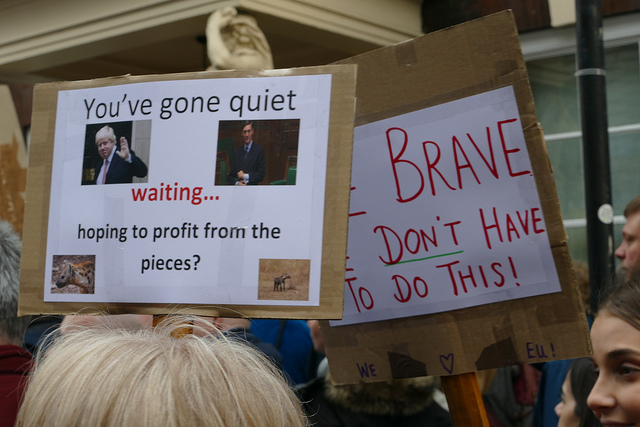 “Her Brexit deal is dreadful”; “Not so much the vassal state as the slave state” – Jacob Rees-Mogg

“We are on the verge of making a historic mistake”; “Unless we junk the backstop we are going to find Brussels has us exactly where they want us”; “It’s so evidently a bad deal for the UK”; “It is dangerous and unstable politically and economically” – Boris Johnson

COULD the poster boy’s of the Brexiteers have been any clearer?

But as the crunch approaches, the true red, white and blue Tories have lost their nerve.

Rees-Mogg – he of the “slave state” rhetoric – writes in the Daily Mail: “I apologise for changing my mind…Theresa May’s deal is a more faltering step than I want, or feel, could be taken —but at least it is a step forward.”

Boris, the man who can’t find enough adjectives to describe his unequivocal hatred of the May deal, on Wednesday night said he will do the unthinkable, and vote for “a historic mistake”.

May offered her own head on Wednesday [27 May] to get the third vote on her Deal through. However, the DUP nixed that possibility just hours later when they said they wouldn’t back it. The ERG rats (including Rees-Mogg) are running back to their No Deal sinking ship, as May’s is sinking even faster.

READ MORE: Analysis: Roar of the feeble lion – why the Tory Right are going nowhere

But if you think that means the shift in the Brexiteer ranks on the Withdrawal Agreement is irrelevant, you’ld be much mistaken. In fact, Rees-Mogg and Johnson’s support for May is the confirmation we need that Brexit – almost whatever happens now – will be the Tory’s greatest humiliation.

Because of course nothing has changed: the back stop remains, which means the EU has all the leverage in trade negotiations with Britain. It may well be one of the Brexiteer charlatans like Rees-Mogg or Johnson who lead those trade negotiations if the Deal passes, but that will make little difference to the outcome – Britain will have to accept terms that will be massively favourable to the EU. After the humiliation of the Withdrawal Agreement, why would Brussels settle for anything other than a trade deal which humiliates Britain, and serves as a warning to the remaining 27 member states?

It must be remembered that for someone who was a true believer like Rees-Mogg, Brexit was the great renewal of British capitalism. ‘Empire 2.0’ would see Britain broken from the shackles of the EU’s regulatory regime, and new trade deals would give a sharp boost to British productivity and competitiveness. 90 per cent of new global growth will come from outside Europe they said: the EU is the past, Britain could be part of the future.

The other perspective, the majority view among the British elite, and the pathway Britain has actually been on since at least Thatcher, is that Britain acts as the US’ key ally in the EU, holding the transatlantic partnership together. The City of London would act as the financial centre where EU and US capitalism would meet. If ever the EU shifted against US interests, Britain would be there – on the inside – to pull the other way. There’s a reason why President Obama – a staunch realist – sided in favour of Remain in the run-up to the 2016 referendum.

The reality of May’s deal combined with the likely negotiating outcome of the future trade deal is that it leaves Britain without a seat at the EU table, while trapping it inside the Brussels’ orbit, unable to pursue an independent economic strategy. It fulfils neither the needs of Empire 2.0, or the status quo strategy of buttressing American hegemony in the EU. Thus, it leaves Britain diminished.

Empire 2.0 may well have always been a fantasy, but it was a fantasy that Rees-Mogg and co really believed in: they pride themselves on doing what’s in the best interests of the British ruling class, even if they had a minority view within that class of people. But if May’s deal goes through with Brexiteers support, the Tories – united – will have consciously signed-off on diminishing the UK state’s influence and power in the world. No time in the history of that party comes to mind where you can say that.

Final point: Rees-Mogg and Johnson say they had no other where to turn, but they did: a General Election. A fresh mandate could have given the Brexiteers fresh impetus. It shows the lack of confidence and conviction they have in their project that they don’t think a hard Brexit argument can win on the doorsteps.